The Ordnungspolizei or Orpo (English: Order Police) were the uniformed police force in Nazi Germany between 1936 and 1945.[2] The Orpo organization was absorbed into the Nazi monopoly on power after regional police jurisdiction was removed in favor of the central Nazi government (Verreichlichung of the police). It served under the control of the SS by law until the end of World War II.[2] Owing to their green uniforms, Orpo were also referred to as Grüne Polizei (green police). The force was first established as a centralized organisation uniting the municipal, city, and rural uniformed police that had been organised on a state-by-state basis.[2]

The Ordnungspolizei embraced virtually all of the Third Reich's law-enforcement and emergency response organizations, including fire brigades, coast guard, civil defense, and even night watchmen. Deployed along with the Wehrmacht army in the invasion of Poland in 1939,[3] it had the task of terrorizing the civilian population of the conquered and colonized countries beginning in spring 1940.[3][4]

Reichsführer-SS Heinrich Himmler was named Chef der Deutschen Polizei im Reichsministerium des Innern (Chief of German Police in the Interior Ministry) on 17 June 1936 after Hitler announced a decree which was to "unify the control of police duties in the Reich".[5] Traditionally, law enforcement in Germany had been a state and local matter. In this role, Himmler was nominally subordinate to Interior Minister Wilhelm Frick. However, the decree effectively subordinated the police to the SS, making it virtually independent of Frick's control. Himmler gained authority as all of Germany's uniformed law enforcement agencies were amalgamated into the new Ordnungspolizei, whose main office became populated by officers of the SS.[6]

The police were divided into the Ordnungspolizei (Orpo or regular police) and the Sicherheitspolizei (SiPo or security police), which had been established in June 1936.[5] The Orpo assumed duties of regular uniformed law enforcement while the SiPo consisted of the secret state police (Geheime Staatspolizei or Gestapo) and criminal investigation police (Kriminalpolizei or Kripo). The Kriminalpolizei was a corps of professional detectives involved in fighting crime and the task of the Gestapo was combating espionage and political dissent. On 27 September 1939, the SS security service, the Sicherheitsdienst (SD) and the SiPo were folded into the Reich Main Security Office (Reichssicherheitshauptamt or RSHA).[7] The RSHA symbolized the close connection between the SS (a party organization) and the police (a state organization).

The Order Police played a central role in carrying out the Holocaust. By "both career professionals and reservists, in both battalion formations and precinct service" (Einzeldienst) through providing men for the tasks involved.[8]

The Nazi German Order Police had grown to 244,500 men by mid-1940.[3] The Orpo was under the control of Reichsführer-SS Heinrich Himmler who was the Chef der Deutschen Polizei im Ministerium des Innern (Chief of the German Police in the Ministry of the Interior). It was initially commanded by SS-Oberstgruppenführer und Generaloberst der Polizei Kurt Daluege. But in 1943, Daluege had a massive heart attack and was removed from duty. He was replaced by SS-Obergruppenführer und General der Waffen-SS und der Polizei Alfred Wünnenberg, who served until the end of the war. By 1941, the Orpo had been divided into the following offices covering every aspect of German law enforcement.

The central command office of the entire Ordnungspolizei was located at its Headquarters (Hauptamt Ordungspolizei) in Berlin and, from 1943 was considered a full SS-Headquarters command as well.[9] 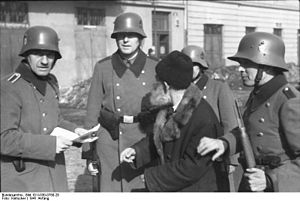 Ordnungspolizei conducting a raid (razzia) in the Kraków ghetto, January 1941.

Between 1939 and 1945, the Ordnungspolizei maintained military formations, trained and outfitted by the main police offices within Germany.[10][11] Specific duties varied widely from unit to unit and from one year to another.[12] Generally, the Order Police were not directly involved in combat,[13] except for Ardennes in May 1940, and the Siege of Leningrad in 1941.[14] The first 17 battalion formations (the SS-Polizei-Bataillone) were deployed by Orpo in September 1939 along with the Wehrmacht army in the invasion of Poland.[11] The battalions guarded Polish prisoners of war behind the German lines, and carried out expulsion of Poles from Reichsgaue under the banner of Lebensraum.[15] They also committed atrocities against both the Catholic and the Jewish populations as part of those "resettlement actions".[16] After hostilities have ceased, the battalions took up the role as security forces, patrolling the perimeters of the Jewish ghettos in German-occupied Poland (the internal ghetto security issues were managed by the SS, SD, and the Criminal Police, in conjunction with the Jewish ghetto administration).[17]

Each battalion consisted of approximately 500 men armed with light infantry weapons.[13] In the East, each company also had a heavy machine-gun detachment.[18] Administratively, the Police Battalions remained under the Chief of Police Kurt Daluege, but operationally they were under the authority of regional SS and Police Leaders (SS- und Polizeiführer), who reported up a separate chain of command directly to Reichsführer-SS Heinrich Himmler.[19] The battalions were used for various auxiliary duties, including the so-called anti-partisan operations, support of combat troops, and construction of defense works (i.e. Atlantic Wall).[20] Some of them were focused on traditional security roles as an occupying force, while others were directly involved in actions designed to inflict terror and in the ensuing Holocaust.[21] While they were similar to Waffen-SS, they were not part of the thirty-eight Waffen-SS divisions, and should not be confused with them, including the national 4th SS Polizei Panzergrenadier Division.[20] The battalions were originally numbered in series from 1 to 325, but in February 1943 were renamed and renumbered from 1 to about 37,[20] to distinguish them from the Schutzmannschaft auxiliary battalions recruited from local population in German-occupied areas.[13] 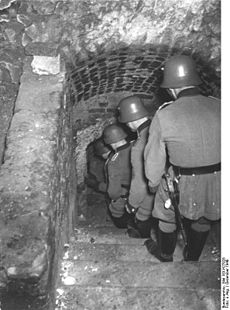 Order Police descending to the cellars on a "Jew-hunt" in Lublin, December 1940. The Lublin Ghetto was set up in March 1941

The Orpo Police Battalions operating both independently and in conjunction with the SS Einsatzgruppen, became an integral part of the Final Solution in the two years following the attack on the Soviet positions in eastern Poland on 22 June 1941, commencing Operation Barbarossa. The first mass killing of 3,000 Jews by the Battalion 309 occurred in occupied Białystok on 12 July 1941.[22] Police Battalions were part of the first and second wave of killings in 1941–42 in the formerly Soviet-occupied eastern Poland and also during the killing operations in the USSR proper, whether as part of Police Regiments, or as separate units reporting directly to the local SS and police leader.[23] They included the Reserve Police Battalion 101 from Hamburg, Battalion 133 of the Nürnberg Order Police, Battalions 45, 309 from Koln, and 316 from Bottrop-Oberhausen.[24] Their murder operations bore the brunt of the Holocaust by bullet on the Eastern Front.[25] In the immediate aftermath of World War II, this latter role was obscured both by the lack of court evidence and by deliberate obfuscation, while most of the focus was on the better-known Einsatzgruppen ("Operational groups") who reported to the Reichssicherheitshauptamt (RSHA) under Reinhard Heydrich.[26]

Orpo Police Battalions involved in direct killing operations were responsible for at least 1 million deaths.[27] Starting in 1941 the Battalions and local Order Police units helped to transport Jews from the ghettos in both Poland and the USSR (and elsewhere in occupied Europe) to the concentration and extermination camps, as well as operations to hunt down and kill Jews outside the ghettos.[28] The Order Police were one of the two primary sources from which the Einsatzgruppen drew personnel in accordance with manpower needs (the other being the Waffen-SS).[29]

In 1942, the majority of the police battalions were re-consolidated into thirty SS and Police Regiments. These formations were intended for garrison security duty, anti-partisan functions, and to support Waffen-SS units on the Eastern Front. Notably, the regular military police of the Wehrmacht (Feldgendarmerie) were separate from the Ordnungspolizei. 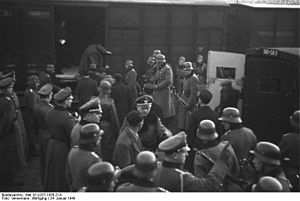 Troops from the SS Police Battalions load Jews into boxcars at Marseille, France in January 1943.

The primary military arm of the Ordnungspolizei was the SS Polizei Division, 4th Panzergrenadier Division of the Waffen-SS. Mainly used as a rear guard and reserve formation, the Polizei Division was historically known as being undertrained and lacking in skilled combat tactics. The division consisted of four police regiments composed of Orpo personnel and was typically used to rotate police members into a military situation, so as not to lose police personnel to the general draft of the Wehrmacht or to the full SS divisions of the regular Waffen-SS.

Very late in the war several Orpo SS-Police regiments were transferred to the Waffen-SS to form the 35th SS and Police Grenadier Division.

By the start of the Second World War in 1939, the SS had effectively gained complete operational control over the German Police, although outwardly the SS and Police still functioned as separate entities. The Ordnungspolizei maintained its own system of insignia and Orpo ranks as well as distinctive police uniforms. Under an SS directive known as the "Rank Parity Decree", policemen were highly encouraged to join the SS and, for those who did so, a special police insignia known as the SS Membership Runes for Order Police was worn on the breast pocket of the police uniform.

In 1940, standard practice in the German Police was to grant equivalent SS rank to all police generals. Police generals who were members of the SS were referred to simultaneously by both rank titles - for instance, a Generalleutnant in the Police who was also an SS member would be referred to as SS Gruppenführer und Generalleutnant der Polizei. In 1942, SS membership was mandatory for police generals, with SS collar insignia (overlaid on police green backing) worn by all police officers ranked Generalmajor and above.

The distinction between the police and the SS had virtually disappeared by 1943 with the creation of the SS and Police Regiments, which were consolidated from earlier police security battalions. SS officers now routinely commanded police troops as well as any police general serving in command of military troops granted equivalent SS rank in the Waffen-SS. In August 1944, when Himmler was appointed Chef der Ersatzheeres (Chief of Home Army), all police generals automatically were granted Waffen-SS rank because they had authority over the prisoner-of-war camps.

Himmler's ultimate aim was to replace the regular police forces of Germany with a combined racial/state protection corps (Staatsschutzkorps) of pure SS units. Local law enforcement would be undertaken by the Allgemeine-SS with the Waffen-SS providing homeland-security and political-police functions. Historical analysis of the Third Reich has revealed that senior Orpo personnel knew of Himmler's plan and were opposed to it.

At the close of the Second World War, the Orpo ceased to exist; but many of its personnel continued with business as usual, performing police services for the Allied occupation forces. The traditions of the Orpo continued in East Germany, which maintained a state police force (Volkspolizei) designed after the SS structures, being based on a centralized system. In West Germany, the police were decentralized again, as they had been before 1936, with each of the new federal states (called Bundesländer) establishing its own police force, the Landespolizei, each of which survives to this day. Many Landespolizei regulations, procedures, and even some uniforms, which are green, and insignia, can be traced back to the pre-1936 forces.