From Infogalactic: the planetary knowledge core
Jump to: navigation, search
This article is about political philosophy of Ordoliberalism. For their economic system, see Freiburg School. For the practical implementation in Germany, see Social market economy.

Ordoliberalism is the German variant of social liberalism that emphasizes the need for the state to ensure that the free market produces results close to its theoretical potential.[1]

Ordoliberal ideals (with modifications) drove the creation of the post-World War II German social market economy and its attendant Wirtschaftswunder. However, ordoliberals promoted the concept of the social market economy, and this concept promotes a strong role for the state with respect to the market, which is in many ways different from the ideas that are nowadays connected with the term neoliberalism.[2]

The term "Ordoliberalism" was coined in 1950 by Hero Moeller, and refers to the academic journal ORDO.[3]

The theory was developed from about 1930–1950 by German economists and legal scholars from Freiburg School such as Walter Eucken, Franz Böhm, Hans Grossmann-Doerth, Leonhard Miksch and others.

Ordoliberal ideals (with modifications) drove the creation of the post-World War II German social market economy. They were especially influential on forming a firm competition law in Germany.

Since the 1960s ordoliberal influence on economics and jurisprudence has significantly diminished.[6] 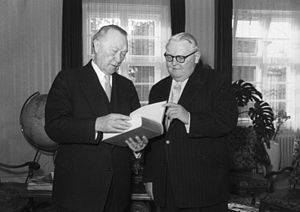 Ludwig Erhard with Konrad Adenauer in 1956, while Erhard was Minister of Economics.

Ordoliberalism was a major influence of the economic model developed in the post-war West Germany. Ordoliberalism in Germany became known as the Social Market Economy. The Ordoliberal model implemented in Germany was started by the government of Konrad Adenauer. His government's Minister of Economics, Ludwig Erhard, was a known Ordoliberal and adherent of the Freiburg School. Under Adenauer's government, some, but not all, price controls were lifted, and taxes on small businesses and corporations were lowered. Furthermore, social security and pensions were increased to provide a social basis. Ordoliberals have stated that these policies led to the 'Wirtschaftswunder, or economic miracle. [7]

Ordoliberal theory holds that the state must create a proper legal environment for the economy and maintain a healthy level of competition (rather than just "exchange") through measures that adhere to market principles. This is the foundation of its legitimacy.[8] The concern is that, if the state does not take active measures to foster competition, firms with monopoly (or oligopoly) power will emerge, which will not only subvert the advantages offered by the market economy, but also possibly undermine good government, since strong economic power can be transformed into political power.[9]

Quoting Stephen Padgett: "A central tenet of ordo-liberalism is a clearly defined division of labor in economic management, with specific responsibilities assigned to particular institutions. Monetary policy should be the responsibility of a central bank committed to monetary stability and low inflation, and insulated from political pressure by independent status. Fiscal policy—balancing tax revenue against government expenditure—is the domain of the government, whilst macro-economic policy is the preserve of employers and trade unions (Funk, 2000, pp. 20-1; Dyson, 2001, p.141)."[10] The state should form an economic order instead of directing economic processes, and three negative examples ordoliberals used to back their theories were Nazism, Keynesianism, and Russian socialism.[11] The Ordoliberal idea of a social market economy is often seen as a progressive alternative beyond left and right[12] and as a third way between collectivism and laissez-faire liberalism.[13]

While the ordoliberal idea of a social market is similar to that of the third-way social democracy advocated by the likes of the New Labour government (especially during the Premiership of Tony Blair), there are a few key differences. Whilst they both adhere to the idea of providing a moderate stance between socialism and capitalism, the Ordoliberal social market model often combines private enterprise with government regulation to establish fair competition (although German network industries are known to have been deregulated),[14] whereas advocates of the third-way social democracy model have been known to oversee multiple economic deregulations. The third way social democracy model has also foreseen a clash of ideas regarding the welfare state's establishment, in comparison to the ordoliberal's idea of a social market model being open to the benefits of social welfare.[15]

Ordoliberals are also known for pursuing a minimum configuration of vital resources and progressive taxation.[16] The Ordoliberal emphasis on the privatization of public services and other public firms such as telecommunication services;[14] wealth redistribution and minimum wage laws as regulative principles makes clear the links between this economic model and the social market economy.[17]

Wilhelm Röpke considered ordoliberalism to be "liberal conservatism", against capitalism in his work Civitas Humana ("A Humane Order of Society", 1944). Alexander Rüstow also criticized laissez-faire capitalism in his work Das Versagen des Wirtschaftsliberalismus ("The Failure of Economic Liberalism", 1950). The ordoliberals thus separated themselves from classical liberals[8][18] and valued the idea of social justice.[19] "Social security and social justice", wrote Eucken, "are the greatest concerns of our time".[20]

Michel Foucault also notes the similarity (beyond just historical contemporaneity) between the Ordo/Freiburg school and the Frankfurt School of critical theory, due to their inheritance from Max Weber. That is, both recognise the "irrational rationality" of the capitalist system, but not the "logic of contradiction" that Marx recognized. Both groups took up the same problem, but in vastly different directions.[21] The political philosophy of Ordoliberals was influenced by Aristotle, Tocqueville, Hegel, Spengler, Karl Mannheim, Max Weber, and Husserl.[22]

Ordoliberalism has its critics. According to Sebastian Dullien and Ulrike Guérot, ordoliberalism is central to the German approach to euro crisis resolution, which has often led to conflicts with other European countries.[23]

Indeed, ordoliberal economist Hans-Werner Sinn of the University of Munich argues in his 2014 book The Euro Trap: On Bursting Bubbles, Budgets, and Beliefs that the "European Central Bank has become too accommodating and that its plans to buy sovereign debt are illegal". Additionally, he argues that the eurozone bailouts during the eurozone crisis have "created moral hazard, allowing feckless Mediterranean countries to get away with minimal reforms and only limited fiscal discipline".[24]