From Infogalactic: the planetary knowledge core
Jump to: navigation, search
For other uses, see Orenburg (disambiguation).

The city is located at the confluence of the Sakmara and Ural Rivers. The highest point of the city is 154.4 meters (507 ft).[citation needed]

The Russian Empire began plans for the expansion into Asia by construction of an eastern frontier fortress town in the southern Ural region to be named Orenburg in 1734. The colonists originally founded a settlement in 1735 at the confluence of the Ural River with the Or River. The town's name meant "fortress near the Or," as Burg is German for castle. This settlement changed its name in 1739 to Orsk. An attempt was made to found another Orenburg about 175 kilometers (109 mi) west at a location called Krasnogor, or "Red Hill," in 1741, but this settlement failed. A third Orenburg was successfully established by Ivan Neplyuyev at its present location approximately 250 kilometers (160 mi) west down the Ural from Orsk in 1743. This third Orenburg functioned as an important military outpost on the frontier with the nomadic Kazakhs. It became the center for the Orenburg Cossacks.

Orenburg played a major role in Pugachev's Rebellion (1773–1774). At the time, it was the capital of a vast district and the seat of the governor. Yemelyan Pugachev besieged the city and its fortress from nearby Berda from October 1773 - March 26, 1774. The defense was organized by lieutenant-general Reinsdorp. General Golytsin defeated Pugachev at Berda, and later again at Kargala (north of Orenburg). Most of the city was left in ruins, and thousands of inhabitants had died in the siege.

Alexander Pushkin visited Orenburg in 1833 during a research trip for his books The History of Pugachev and his famous novel The Captain's Daughter. He met his friend Vladimir Dal here, who would later write the first serious dictionary of the Russian language.

Orenburg was the base for General Perovsky's expeditions against the Khanate of Khiva in the 1830s through 1850s. After the incorporation of Central Asia into the Russian Empire, Orenburg became a trading station and, since the completion of the Trans-Aral Railway, a prominent railway junction en route to the new Central Asian possessions and to Siberia.

From 1938 to 1957, the city bore the name Chkalov (Чка́лов) (after the prominent test pilot Valery Chkalov). The city's distance from the German invasion during World War II led many Soviet enterprises to flee there, helping to spur the city's economic growth.

Orenburg has been a major railway center ever since the Samara-Zlatoust and Orenburg-Tashkent railroads were completed, respectively in 1876 and 1905.[16]

Orenburg's main airport is the Orenburg Tsentralny Airport,[17] located about 25 kilometers (16 mi) east of the city, on the Orsk destination, and is the headquarters of Orenair.[17]

There is an airbase located 9 kilometers (5.6 mi) southwest of the city.

Orenburg is a regional center of education and has a number of cultural institutions and museums. 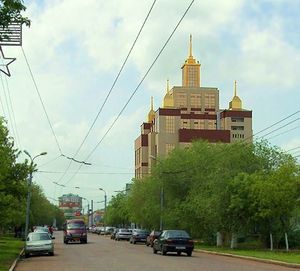 Library of the Orenburg State University

Established in 1955 as a Branch of Kuibyshev Polytechnical Institute (currently Samara State Technical University). It was transformed to the Orenburg Polytechnical Institute in 1971. In 1994 it was named as Orenburg State Technical University. Gained status of university in 1996. Currently, there are 18 Faculties, 3 Research & Development institutes, 4 Regional Branches, technology incubator “OSU Technopark”, botanic garden, meteorological station, sport complex.

Established in 1944 as Chkalov State Medical Institute. It was renamed to Orenburg State Medical Institute in 1957 (at that time Orenburg city regained its original name after being named Chkalov from 1937 till 1957). Gained status of academy in 1994. Currently there are 8 Faculties: Medicine, Pediatric, Stomatology (Dentistry), Pharmacy, Clinical Psychology, Nursing, Public Health (Медико-профилактический), Continuing Education.

Mountain and river tourism is developed in the region. There are a number of fast mountain rivers and rocks in pleated spurs of the southern edge of the Urals range, popular with tourists.

The city is famous for its down Orenburg shawls. The thinnest lacy design, knitted by hand shawls and cobweb-like kerchiefs (pautinkas), is not only warm, but also is used for decorative purposes.

A famous boulevard on the embankment of the Ural River is one of the most notable places in Orenburg.

Orenburg TV Tower is a guyed mast of unusual design. It is a 200-meter (660 ft) tall mast equipped with six crossbars running from the mast structure to the guys.[20]

In October 2015, the Russian Rink Bandy Cup will be organised.[4]

Orenburg has the following sister cities:[24]