The Orontes (/əˈrɒntiz/; Ὀρόντης) or Asi (Arabic: العاصي‎‎, ‘Āṣī; Turkish: Asi) is a northward flowing river starting in Lebanon and flowing through Syria and Turkey before entering the Mediterranean Sea.[1]

It was anciently the chief river of the Levant, The modern name ‘Āṣī means ("rebel"), because the river flows from the south to the north unlike the rest of the rivers in the region.[2]

For the Assyrians, the river was named Arantu in the 9th century BC while the Egyptians named it Araunti; the etymology of the name is unknown.[3] The Arantu became "Orontes" in Greek but the Macedonian settlers in Apamea named it the Axius; the Arabic name "Asi" was derived from the "Axius" rather than the older name.[4]

Strabo tells a story about the river; its original name was Typhon then became the Orontes when a man named Orontes built a bridge on it.[3] According to Strabo, Zeus forced the dragon Typhon out the sky by hitting him with a thunderbolt and the fall of the monster created the river bed of the Orontes.[5] The story of Strabo is apparently of Phoenician or Egyptian origin instead of Greek.[6] 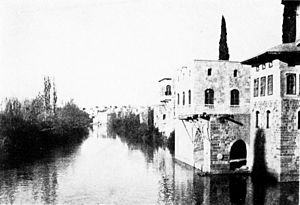 The Orontes rises in the springs near Labweh in Lebanon on the east side of the Beqaa Valley (in the Beqaa Governorate), very near the source of the southward-flowing Litani, and runs north, parallel with the coast, falling 600 metres (2,000 ft) through a gorge.[1] Leaving this it expands into the Lake of Homs in Syria also known as Qattinah lake formed by a Roman-era dam and through the city of Homs (or Ḥimṣ). Below is the district of Hamah (Hamaih-Epiphaneia) and the meadows of Amykes, containing the sites of ancient Apamea and Larissa.[1] To the west is the Coastal Mountain Range. This central section ends at the rocky barrier of Jisr al-Hadid, where the river turns west into the plain of Antioch in Turkey.[1]

Two large tributaries from the north, the southward flowing Afrin on the west and Karasu on the east join it through the former Lake of Antioch, which is now drained through an artificial channel (Nahr al-Kowsit). Passing north of the modern Antakya (ancient Antioch) the Orontes plunges southwest into a gorge (compared by the ancients to Tempe), and falls 50 metres (160 ft) in 15 kilometres (9.3 mi) to the sea just south of the little port of Samandağı (former Suedia, in antiquity Seleucia Pieria), after a total course of 450 kilometres (280 mi).[1] 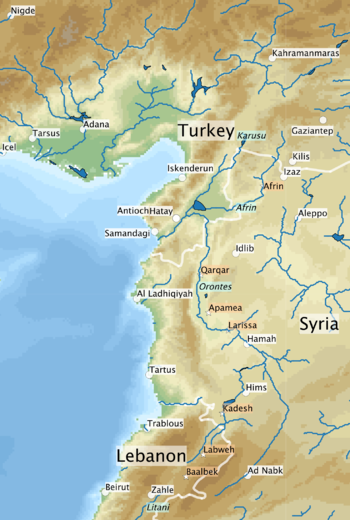 Map of the Orontes river. White lines are country borders, river names are italic on a blue background, current cities or major towns have white backgrounds, orange background for other places of significance.

The Orontes is not easily navigable and the valley derives its historical importance as a road for north/south traffic; from Antioch south to Homs and thence to Damascus.[1] On the Orontes was fought the major Battle of Kadesh (circa 1274 BC) between the Egyptian army of Ramesses II from the south and the Hittite army of Muwatalli II from the north. The river was also the site of the Battle of Qarqar fought in 853 BC, when the army of Assyria, led by king Shalmaneser III, encountered an allied army of 12 kings led by Hadadezer of Damascus. In 637 A.D. the Battle of Iron bridge was fought between the forces of the Rashidun Caliphate and the Byzantine Empire near the Iron bridge on the river made by Romans.

The Orontes has long been a boundary marker. For the Egyptians it marked the northern extremity of Amurru, east of Phoenicia. For the Crusaders in the 12th century, the Orontes River became the permanent boundary between the Principality of Antioch and that of Aleppo.

The French writer Maurice Barrès (1862–1923) wrote about the river in his Un Jardin sur l'Oronte.