Baron Oscar Dickson, or Oskar Dickson (December 2, 1823 – June 6, 1897) was a Swedish magnate, bulk merchant, industrialist and philanthropist from a family of Scottish origin. In his time he was considered the most affluent of all Swedes.

Dickson was a partner in a company that owned ships and sawmills. The Baggböle sawmill's business methods first came to a head when James Dickson Jr was taken to court in 1850. The accusation was that the sawmill had cut wood that belonged to the king.[1]

Dickson was fortunate to avoid prosecution. The saw mill business processed thousands of trees in the nineteenth century.[2] 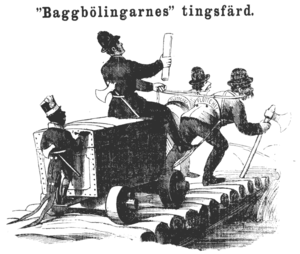 A satirical cartoon from 1867 features Oscar Dickson who was a manager at the time.

The exploitation of Crown timber could not continue and in 1866-7 the company was again taken to court and this time they were obliged to agree to help prevent the use of Crown timber. Oscar Dickson and the company were featured in satirical cartoons. This was the time when the new Swedish word "Baggböleri" was first seen in print which was a synonym for the exploitation of forests.[1]

Dickson, along with King Oscar II of Sweden and Aleksandr Mikhaylovich Sibiryakov, was the patron of a number of Arctic expeditions in the 19th century. He sponsored Adolf Erik Nordenskiöld's explorations to the Canadian[3] and the Russian Arctic and Greenland, as well as Fridtjof Nansen's Polar journey on the Fram.

Ever an Arctic enthusiast, Oscar Dickson contributed to sponsor several important Polar ventures between the years 1860 and 1900. Dickson was made a Baron in 1885 by King Oscar. Dickson was a member of the Royal Swedish Academy of Sciences from 1878.

Dikson Island in the Kara Sea was named after Oscar Dickson,[4] as were Dicksonfjorden and Dickson Land on Svalbard.[5][6]