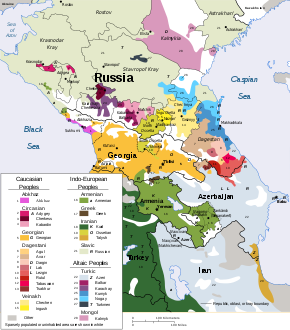 Ethnolinguistic groups in the Caucasus region

Ossetian, also known as Ossete and Ossetic[4] (endonym: Ирон æвзаг, Iron ævzag), is an Eastern Iranian language spoken in Ossetia, a region on the northern slopes of the Caucasus Mountains.

The Ossete area in Russia is known as North Ossetia-Alania, while the area south of the border is referred to as South Ossetia, recognized by Russia, Nicaragua, Venezuela and Nauru as an independent state but by most of the rest of the international community as part of Georgia. Ossetian speakers number about 577,450, with 451,000 speakers in the Russian Federation recorded in the 2010 census.[5]

Ossetian is the spoken and literary language of the Ossetes, a people living in the central part of the Caucasus and constituting the basic population of the republic of North Ossetia–Alania, which belongs to the Russian Federation, and of South Ossetia, which is de facto independent (but is de jure part of the Georgian Republic according to most other states). Ossetian belongs to the Iranian group of the Indo-European family of languages. Within Iranian it is placed in an Eastern subgroup and further to a Northeastern sub-subgroup, but these are areal rather than genetic groups. The other Eastern Iranian languages such as Pashto and Yaghnobi show certain commonalities but also deep-reaching divergences from Ossetic.

From deep Antiquity (since the 7th–8th centuries BC), the languages of the Iranian group were distributed in a vast territory including present-day Iran (Persia), Central Asia, Eastern Europe and the Caucasus. Ossetian is the sole survivor of the branch of Iranian languages known as Scythian. The Scythian group included numerous tribes, known in ancient sources as the Scythians, Massagetae, Saka, Sarmatians, Alans and Roxolans. The more easterly Khorezmians and the Sogdians were also closely affiliated, in linguistic terms.

Ossetian, together with Kurdish, Tati and Talyshi, is one of the main Iranian languages with a sizable community of speakers in the Caucasus. It is descended from Alanic, the language of the Alans, medieval tribes emerging from the earlier Sarmatians. It is believed to be the only surviving descendant of a Sarmatian language. The closest genetically related language may be the Yaghnobi language of Tajikistan, the only other living Northeastern Iranian language.[6][7] Ossetian has a plural formed by the suffix -ta, a feature it shares with Yaghnobi, Sarmatian and the now-extinct Sogdian; this is taken as evidence of a formerly wide-ranging Iranian-language dialect continuum on the Central Asian steppe. The names of ancient Iranian tribes (as transmitted through Ancient Greek) in fact reflect this pluralization, e.g. Saromatae (Σαρομάται) and Masagetae (Μασαγέται).[8]:69

The earliest known written sample of Ossetian is an inscription which dates from the 10th to 12th centuries and was found near the River Bolshoi Zelenchuk at Arkhyz. The text is written in the Greek alphabet, with special digraphs.

The only other extant record of Proto-Ossetic are the two lines of "Alanic" phrases appearing in the Theogony of John Tzetzes, a 12th-century Byzantine poet and grammarian:

Marginalia of Greek religious books, with some parts (such as headlines) of the book translated into Old Ossetic, have been recently found.[citation needed]

It is theorized that during the Proto-Ossetic phase, Ossetian underwent a process of phonological change conditioned by a Rhythmusgesetz or "Rhythm-law" whereby nouns were divided into two classes, those heavily or lightly stressed. "Heavy-stem" nouns possessed a "heavy" long vowel or diphthong, and were stressed on the first-occurring syllable of this type; "light-stem" nouns were stressed on their final syllable. This is precisely the situation observed in the earliest (though admittedly scanty) records of Ossetian presented above.[8]:47 This situation also obtains in Modern Ossetian, although the emphasis in Digor is also affected by the "openness" of the vowel.[11] The trend is also found in a glossary of the Jassic dialect dating from 1422.[12]

There are two important dialects: Iron and Digor, spoken by five-sixths and one-sixth of the population, respectively. A third dialect of Ossetian, Jassic, was formerly spoken in Hungary.

Ossetian researcher V.I. Abaev distinguishes 26 consonants, to which five labialized consonants and two semivowels may be added. Unusually for an Indo-European language, there is a series of glottalized (ejective) stops and affricates. This can be considered an areal feature of languages of the Caucasus.

Voiceless consonants become voiced word-medially (this is reflected in the orthography as well). /t͡ʃ/, /d͡ʒ/, and /t͡ʃʼ/ were originally allophones of /k/, /ɡ/, and /kʼ/ when followed by /e/, /i/ and /ə/; this alternation is still retained to a large extent.

Stress normally falls on the first syllable, unless it has a "weak" vowel (/ə/), in which case it falls on the second syllable. In the Iron dialect, definiteness is expressed in post-initially stressed words by shifting the stress to the initial syllable. This reflects the fact that historically they received a syllabic definite article (as they still do in the Digor dialect), and the addition of the syllable caused the stress to shift.[6]

In the course of centuries-long propinquity to and intercourse with Caucasian languages, Ossetian became similar to them in some features, particularly in phonetics and lexicon. However, it retained its grammatical structure and basic lexical stock; its relationship with the Iranian family, despite considerable individual traits, does not arouse any doubt.

Ossetic has lost the grammatical category of gender which many Indo-European languages preserve until today.[6] According to the Encyclopædia Britannica 2006[14] Ossetian preserves many archaic features of Old Iranian, such as eight cases and verbal prefixes. It is debated what part of these cases are actually inherited from Indo-Iranian case morphemes and what part have re-developed, after the loss of the original case forms, through cliticiziation of adverbs or re-interpretations of derivational suffixes: the number of "inherited" cases according to different scholars ranges from as few as three (nominative, genitive and inessive) to as many as six (nominative, dative, ablative, directive, inessive). Some (the comitative, equative, and adessive) are secondary beyond any doubt.[15]

Definiteness is, according to Abaev, only expressed by shift of word accent from the second to the first syllable (which is not possible in all nouns):

Nouns and adjectives share the same morphology and distinguish two numbers (singular and plural) and nine cases: nominative, genitive, dative, directive, ablative, inessive, adessive, equative, and comitative. The nominal morphology is agglutinative: the case suffixes and the number suffix are separate, the case suffixes are the same for both numbers and the number suffix is the same for all cases:

Since inessive and genitive show the same forms in both numbers, it is sometimes debated whether Ossetian might possess eight case forms for each number instead of nine.

Verbs distinguish six persons (1st, 2nd and 3d, singular and plural), three tenses (present, past and future, all expressed synthetically), and three moods (indicative, subjunctive, imperative). The person, tense and mood morphemes are mostly fused. Passive voice is expressed periphrastically with the past passive participle and an auxiliary verb meaning "to go"; causative and reflexive meaning are also expressed by periphrastic constructions. Verbs may belong to one of two lexical aspects (perfective vs imperfective); these are expressed by prefixes, which often have prepositional origin. There is an infinitive (morphologically coinciding with the 1st person singular, but syntactically forming a nominal phrase), four participles (present and past active, past passive, and future), and a gerund. Vowel and consonant alternations occur between the present and past stems of the verb and between intransitive and transitive forms. Intransitive and transitive verbs also differ in the endings they take in the past tense (in intransitive verbs, the construction is, in origin, a periphrastic combination of the past passive participle and the verb "to be").[6] There are also special verb forms, such as immediate future tense that is transmitted by adding -inag to the verb and the auxiliary verb meaning "to be". Future Imperative is another special form that is transmitted through usage of independent particle iu. Yet another special verbal form that is used to reflect either an interrupted process or a process that has nearly been completed. This form is made up through the use of a particle sæi that is stuck between the prefix, usually fæ- and the verb.

Ossetic uses mostly postpositions (derived from nouns), although two prepositions exist in the language. Noun modifiers precede nouns. The word order is not rigid, but tends towards SOV. The morphosyntactic alignment is nominative–accusative, although there is no accusative case: rather, the direct object is in the nominative (typically if inanimate or indefinite) or in the genitive (typically if animate or definite).[6]

For numerals above 20, two systems are in use – a decimal one used officially, and a vigesimal one used colloquially.[6] 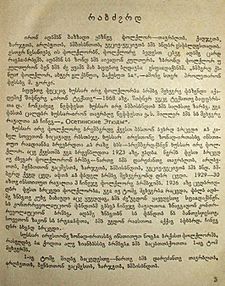 Ossetic text written with Georgian script, from a book on Ossetian folklore published in 1940 in South Ossetia

Written Ossetian may be immediately recognized by its use of the Cyrillic letter Ae (Ӕ ӕ), a letter to be found in no other language using Cyrillic script. The father of the modern Ossetian literary language is the national poet Kosta Khetagurov (1859–1906).[6]

An Iron literary language was established in the 18th century, written using the Cyrillic script in Russia and the Georgian script in Georgia. The first Ossetian book was published in Cyrillic in 1798, and in 1844 the alphabet was revised by a Russian scientist of Finnish-Swedish origin, Andreas Sjögren. A new alphabet based on the Latin script was made official in the 1920s, but in 1937 a revised Cyrillic alphabet was introduced, with digraphs replacing most diacritics of the 1844 alphabet.

In 1820, I. Yalguzidze published a Georgian-script alphabetic primer, adding three letters to the Georgian alphabet.[16] The Georgian orthography receded in the 19th century, but was made official with Georgian autonomy in 1937. The "one nation – two alphabets" issue caused discontent in South Ossetia in the year 1951 demanding reunification of the script, and in 1954 Georgian was replaced with the 1937 Cyrillic alphabet.

A Digor literary language was established in the late 19th century, using the Arabic script. It was abolished in 1939, five years before the Digor were deported to Siberia. Iron in Cyrillic is now the literary language for both dialects.

The table below shows the modern Cyrillic alphabet, used since 1937, with phonetic values for the Iron dialect in the IPA. Di- and tri-graphs in parentheses are not officially letters of the alphabet, but are listed here to represent phonemically distinctive sounds:

In addition, the letters ⟨š⟩ and ⟨ž⟩ were used to transcribe Russian words. The "weak" vowels ⟨æ⟩ [ə] and ⟨ы⟩ [ɨ] are extremely common in the language. 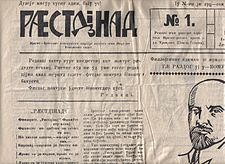 The first page of the first issue of the Ossetian newspaper "Ræstdzinad". Sjögren's Cyrillic alphabet. 1923

The first printed book in Ossetian appeared in 1798. The first newspaper, Iron Gazet, appeared on July 23, 1906 in Vladikavkaz. In 2010, the Watch Tower Society released the first complete Ossetian translation of the Bible, the New World Translation of the Holy Scriptures.[citation needed]

While Ossetian is the official language in both South and North Ossetia (along with Russian), its official use is limited to publishing new laws in Ossetian newspapers. There are two daily newspapers in Ossetian: Ræstdzinad (Рæстдзинад, "Truth") in the North and Xurzærin (Хурзæрин, "The Sun") in the South. Some smaller newspapers, such as district newspapers, use Ossetian for some articles. There is a monthly magazine Max dug (Мах дуг, "Our era"), mostly devoted to contemporary Ossetian fiction and poetry.

The following table illustrates some common Ossetic words with cognates or translations in other Indo-Iranian and other Indo-European languages.