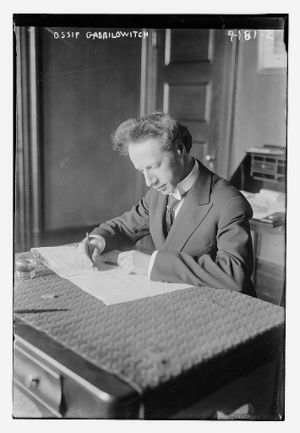 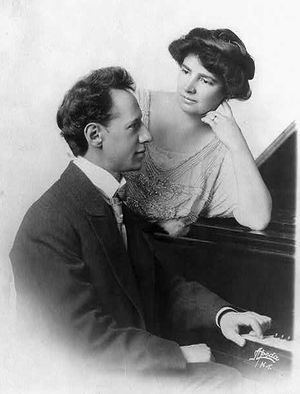 Ossip Gabrilowitsch was born in Saint Petersburg. He studied the piano and composition at the Saint Petersburg Conservatory, with Anton Rubinstein, Anatoly Lyadov, Alexander Glazunov and Nikolai Medtner among others. After graduating in 1894, he spent two years studying piano with Theodor Leschetizky in Vienna.

In July 1905 he recorded ten pieces for the Welte-Mignon reproducing piano, one of the first pianists to do so.

On 6 October 1909, he married Mark Twain's daughter Clara Clemens, a singer who appeared with him in recital. On 18 August 1910, their only child, Nina, was born at Mark Twain's home in Stormfield, Connecticut.[2] Nina, the last known lineal descendant of Mark Twain, died on 16 January 1966 in a Los Angeles hotel. She had been a heavy drinker, and bottles of pills and alcohol were found in her room. Her death was ruled a suicide.[3]

From 1910 to 1914, he was conductor of the Munich Konzertverein (later known as the Munich Philharmonic). At the outbreak of World War I, he was arrested as an enemy national. Through the intervention of the nuncio to Bavaria, Archbishop Eugenio Pacelli (later Pope Pius XII), Gabrilowitsch was freed from jail, and then he headed to the United States[4] via Zürich in August 1914.[5]

He settled in the US, and was offered the post of conductor of the Boston Symphony Orchestra. In declining, he recommended that the Boston board appoint the recently arrived Sergei Rachmaninoff. In 1918 he was appointed the founding director of the Detroit Symphony Orchestra, while still maintaining his life as a concert pianist. Before accepting the conductor's position, he demanded a new auditorium be built, and this was the impetus for the building of Orchestra Hall.

Gabrilowitsch composed a few works, primarily short piano pieces for his own use. He was a National Patron of Delta Omicron, an international professional music fraternity.[6]

He died from stomach cancer on September 14, 1936 in Detroit, Michigan.[7] He is buried in the Langdon plot of the Woodlawn Cemetery in Elmira, New York.