He received Heinrich Himmler's permission to work in Auschwitz from 1944 on. One of Verschuer's best known assistants was Josef Mengele, who, as one of the SS physicians at the Auschwitz death camp, later became known as the "Angel of Death".[4] 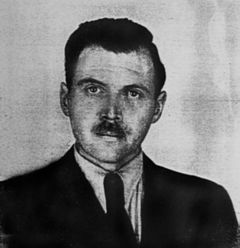 Verschuer was never tried for war crimes despite many indications that he not only was fully cognisant of Mengele's work at Auschwitz, but even encouraged and collaborated with Mengele in some of his most grisly research. In a report to the German Research Council (Deutsche Forschungsgemeinschaft; DFG) from 1944, Verschuer talked about Mengele's assistance in supplying the KWIfA with some "scientific materials" from Auschwitz:

My assistant, Dr. Mengele (M.D., Ph.D.) has joined me in this branch of research. He is presently employed as Hauptsturmführer and camp physician in the concentration camp at Auschwitz. Anthropological investigations on the most diverse racial groups of this concentration camp are being carried out with permission of the SS Reichsführer [Himmler]; the blood samples are being sent to my laboratory for analysis.

Verschuer also noted in the report that the war conditions had made it difficult for the KWIfA to procure "twin materials" for study, and that Mengele's unique position at Auschwitz offered a special opportunity in this respect. In the summer of 1944, Mengele and his Jewish slave assistant Dr. Miklós Nyiszli sent other "scientific materials" to the KWIfA, including the bodies of murdered Gypsies, internal organs of dead children, skeletons of two murdered Jews, and blood samples of twins infected by Mengele with typhus.

However solid evidence of Verschuer's willing collaboration could not be established, much to the disappointment of the principal post-war Allied investigator, Leo Alexander, assigned to his case. In a letter to his wife from 1946, Alexander wrote:

It sometimes seems as if the Nazis had taken special pains in making practically every nightmare come true. Some new evidence has come in where two doctors in Berlin, one a man and the other a woman, collected eyes of different colour. It seems that the concentration camps were combed for people whose one eye had a slightly different color than the other. Who ever [sic] was unlucky enough to possess such a pair of slightly unequal eyes had them cut out and was killed, the eyes being sent to Berlin. This is the carrying out into reality of an old gruesome German fairy tale, which is included in the Tales of Hoffmann, where Dr Coppelius posing as a sandman comes at night and cuts out children's eyes when they are tired. The grim part of the story is that Doctors von Verschuer and [Karin] Magnussen in Berlin did prefer children and particularly twins. There is no end to this nightmare, at least 23 are being tried now and, I trust, the others will follow later.

Alexander initiated investigations into the location of the incriminating collection but could not locate it—it had been sent to an unknown destination in Berlin and from there vanished out of sight; Alexander ruefully concluded that Verschuer had destroyed it.

Later investigators had difficulty getting hard evidence of the gruesome position they felt Verschuer had in The Holocaust. In his denazification hearing, he was eventually judged as a Nazi fellow traveler (Mitläufer) (a relatively mild categorization), fined 600 Reichsmark, and released from custody.

As the war was drawing to a close in 1945, Verschuer moved the files of the KWIfA into the Western part of Germany, hoping for a more favorable response from the advancing Allied armies than from the advancing Soviet Army. In late 1945 or early 1946 he petitioned the mayor of Frankfurt to allow him to reestablish the KWIfA. However the commission in charge of rebuilding the Kaiser Wilhelm Gesellschaft decreed that "Verschuer should be considered not as a collaborator, but one of the most dangerous Nazi activists of the Third Reich." The KWIfA was not reestablished.

In 1951, Verschuer was awarded the prestigious professorship of human genetics at the University of Münster, where he established one of the largest centers of genetics research in West Germany. Like many "racial hygienists" of the Nazi period, and many American eugenicists, Verschuer was successful in redefining himself as a genetics researcher after the war, and avoided the taint of his work with Nazi eugenics. Many of his wartime students were similarly appointed to top positions in universities of Erlangen, Frankfurt, Düsseldorf, and Münster. Karin Magnussen, a biologist whom he worked with, ended up using the eyeballs taken from still-living prisoners at Auschwitz by Dr Josef Mengele for experiments on the pigmentation of the human iris.[5]

He was accepted during the war as a member of the American Eugenics Society, a position he kept until his death.

Verschuer died in 1969 in an automobile accident.

Regarding personal names: Freiherr is a former title (translated as Baron), which is now legally a part of the last name. The feminine forms are Freifrau and Freiin.