Ottawa County is a county located in the northeastern corner of the U.S. state of Oklahoma. As of the 2010 census, the population was 31,848.[1] Its county seat is Miami.[2] The county was named for the Ottawa Tribe of Oklahoma.[3] It is also the location of the federally recognized Modoc Tribe of Oklahoma and the Quapaw Tribe of Indians, which is based in Quapaw.

Ottawa County comprises the Miami, OK Micropolitan Statistical Area, which is included in the Joplin-Miami, MO-OK Combined Statistical Area. The county borders both Kansas and Missouri.

Archaeological studies indicate this area was inhabited for thousands of years by succeeding cultures of prehistoric indigenous peoples. According to the Encyclopedia of Oklahoma History & Culture, at the start of the 20th century, there were eight known Archaic sites (6000 B. C. to 1 A. D.), sixteen Woodland sites (1 A. D. to 1000 A.D.), and six Plains Village sites (1000 to 1500 A. D.).[3]

The Osage Nation had moved into the area from Missouri and Kansas by the 19th century, under pressure from European-American encroachment on their lands. They ceded this land to the Federal Government in exchange for another area farther west in Indian Territory. In 1828, the Western Cherokee, the first group of this nation to relocate west of the Mississippi River, ceded their land in Western Arkansas to the Federal Government in exchange for some of the land just vacated by the Osage.

In 1831, the Federal Government reacquired part of what would eventually become Ottawa County in order to resettle some smaller tribes that had been forced west from the Midwest under its Indian Removal program. These included two tribes of Iroquois, Shawnee, Quapaw, Peoria, Kaskaskia, Miami, Ottawa and Wyandotte. The Neosho Agency administered the affairs of these tribes from 1837 until 1871. In that year, it was renamed as the Quapaw Agency, serving only the tribes in Indian Territory.[3]

The Modoc band led by Captain Jack in northern California was exiled and relocated here in 1873, after being taken as prisoner following their defeat in the Modoc War. The 153 members were settled at the Quapaw Agency. After regaining federally recognized status in 1978 as the Modoc Tribe of Oklahoma, they were given land of their own under federal trust in this county. Native Americans make up nearly 17% of the population in the county.

This county is part of the Tri-state District, a center of lead and zinc mining through the first half of the 20th century. Unrestricted mining resulted in severe environmental degradation and mining centers such as Picher, Oklahoma in the county were included within the Tar Creek Superfund Site in 1980. Environmental remediation has been conducted, but the state and federal government have also closed Picher as a city and relocated nearly all its residents since the early 21st century. In 1996 the government found that 34% of the children had lead poisoning due to groundwater, air and dust effects. 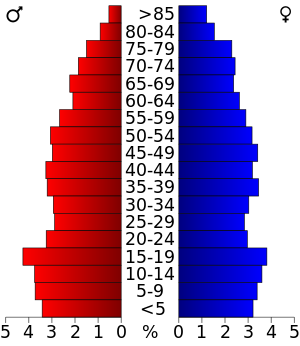 Age pyramid for Ottawa County, Oklahoma, based on census 2000 data.

Lead and zinc mining has been important to the county economy since 1890, and Quapaw lands have been exploited for mining, first by lease. They were restricted in terms of receiving royalties and were generally excluded by discrimination from mining jobs. By 1910, the local mining industry was controlled by a few large corporations, including Commerce Mining and Royalty Company, the Eagle-Picher Company, the Childers Mining Company, the LaClede Lead and Zinc Company, and the American Lead and Zinc Company. In 1926, at the region's peak of production, Ottawa County was the largest source of lead and zinc in the world. By the 1960s most of the mines had closed, leaving mine shafts, sinkholes, chat piles, and other dangers for future cleanup. Such areas have been designated as part of the Tar Creek Superfund Site by the US Environmental Protection Agency. Tripoli, primarily used as an abrasive, was found near Peoria in 1912, and was mined into the twenty-first century.[3]

The following sites are in Ottawa County are listed on the National Register of Historic Places: