Otto-Heinrich Drechsler (1 April 1895 – 5 May 1945) was the General Commissioner of Latvia for the Nazi Germany's occupation regime (Reichskommissariat Ostland) during the World War II. In this capacity, he played a role in setting up the Riga ghetto and was implicated in the extermination of the Latvian Jews. He committed suicide on 5 May 1945, after being captured by the British forces.

Drechsler became an officer cadet (Fahnenjunker) in the Lübeck infantry regiment of the German Army in 1914. He was severely wounded and lost a leg. He was mustered out of the Reichswehr in 1920.[1] During the Weimar Republic Drechsler began the study of dentistry, and obtained the degree of Doctor of Dental Arts. In this time, he became a member of the Nordic Union.[1]

In 1925 Drechsler joined the Nazi party; later, he became supervisor ("Oberstaffelführer") of an SA motor pool.[1]

From 1 August 1932 to 31 May 1933, Drechsler was acting Gauleiter (a high rank in the Nazi party) for the party district ("Gau") encompassing Mecklenburg and Lübeck. On 26 May 1933, Lübeck together with both Mecklenburgs was placed under the authority of a National Governor (Reichsstathalter) named Friedrich Hildebrandt. He assumed office Lübeck on 8 June 1933 and promoted his fellow veteran Drechsler as mayor (Bürgermeister) and Friedrich Völtzer as Senator for Finance and Economy. Additional senators included the Nazis Emil Bannemann (Labor and Welfare), Walther Schröder (Interior), Ulrich Burgstaller (Education and Theater) and Hans Böhmcker (Justice).[2]

Between 1933 and 1937, Drechsler was mayor of Lübeck and President of the Senate of Lübeck as in the Prussian state council. 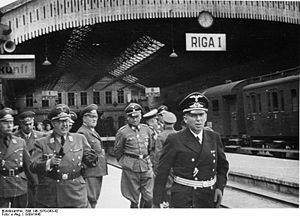 Starting 1 April 1937 he was the first "Senior Mayor of the Prussian Hansa City Lübeck Metropolitan Area ("Oberbürgermeister des preußischen Stadtkreises Hansestadt Lübeck"), and simultaneously from 17 July 1941 through 1944, as Commissioner General (Generalkommissar) for the Nazi occupation authority Reichskommissariat Ostland, he was responsible for the concentration camps in Latvia.

As territorial commissioner for Latvia, Dreschler took up quarters in Riga at the beginning of August 1941. At that point in time the military administration had not yet handed over authority to the civil administration.[3] A leading co-worker in the Reich Ministry for the Occupied Eastern Territories (Reichsministerium für die besetzen Ostegebiete or RMfdbO), Otto Bräutigam, noted in his diary of having had a conflict with the military authorities. These disputes, particularly those involving Drechsler's administrative superior, Hinrich Lohse, were never fully resolved. Based on a settlement with RMfdbO, formal assignment of authority over the administration of Latvian territory, including Riga, was effected on 1 September 1941.[3] One historian, Lumans, states that like Lohse, Drechsler was sympathetic to a limited autonomy for Latvians, but unlike Lohse, he worked well with the SS, except for Friedrich Jeckeln, the organizer of massacres of Jews at Babi Yar, Rumbula and others.[4] In addition to his other positions, Drechsler was a member of the board of overseers of an industrial firm called Hochofenwerkes Lübeck AG.

Involvement in The Holocaust

Throughout the time that Drechsler was in Latvia, large numbers of massacres, particularly of Jews, were carried out by the Germans, together with substantial assistance from Latvian collaborators. In addition, the Jews of Latvia were confined to ghettos, which facilitated their enslavement and murder. As early as July 1941, Drechsler was informed, by his subordinate Gebietskommissar Alnor, of the massacres of the Jews in Ventspils.[5] By October 1941, Heinrich Himmler developed a plan (later abandoned) for establishing, near Riga, an extermination camp similar to those later developed for Operation Reinhard, the secretive Nazi plan to mass-murder most Polish Jews and Gypsies in the occupied Poland. Jews from Germany, Austria and Czechoslovakia (the so-called "Reich Jews") were to be deported to this camp and then murdered. In late October, Himmler informed Lohse and Drechsler of this plan.[4] Also in October 1941, Drechsler received another report from Alnor, this one concerning the ongoing massacres of the Jews in Liepāja.[5] In autumn 1941 Drechsler was closely involved in setting up the Riga ghetto as a confinement zone for Jews.[5] Historian Ezergailis states that Drechsler may have been present at the largest massacre, at Rumbula, on 30 November 1941.[5] The great majority of the victims at Rumbula were from the Riga ghetto.

Drechsler was captured by the British Army after the occupation of Lübeck. Shortly thereafter, on 5 May 1945, he committed suicide.