Grotewohl was born in the city of Braunschweig (which would be part of West Germany during the partition) on 11 March 1894 and his father was a master tailor.[1] Following World War I started his political career as a leader of the Independent Social Democratic Party of Germany (USPD) and minister in the Free State of Brunswick. In 1922 Grotewohl with the majority of the USPD members joined the Social Democratic Party of Germany (SPD) and from 1925 was a member of the Reichstag parliament. Dismissed after the Nazi Machtergreifung in 1933 he was imprisoned several times. 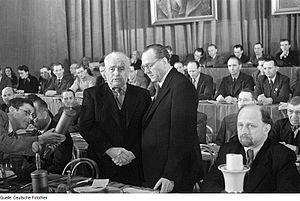 21 April 1946: Pieck (left) and Grotewohl sealing the unification, Ulbricht in the foreground

After World War II he became a leader of the SPD in the Soviet occupation zone of Germany and, fiercely opposed by chairman Kurt Schumacher, led his party into a merger with the Communist Party under Wilhelm Pieck. Grotewohl, after initial hesitation, yielded to the pressure by the Soviet Military Administration and Walter Ulbricht and in April 1946 together with Pieck formed the new Socialist Unity Party (SED).

With the establishment of the German Democratic Republic (GDR) on 7 October 1949, Grotewohl became the GDR's first prime minister (Ministerpräsident), while Wilhelm Pieck served as state president. With the creation of the Council of Ministers (Ministerrat) government of the GDR in 1950 Grotewohl, as Ministerpräsident, became its first chairman. The actual power holder however was Walter Ulbricht, General Secretary of the governing SED Central Committee from 1950 on. 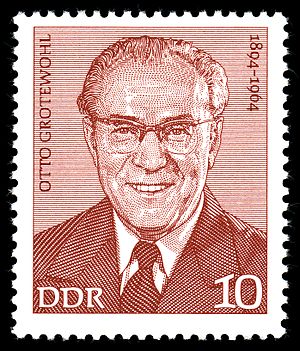 Grotewohl retained the prospective of a left-wing social democrat within the SED. In a major speech to an SED party conference on 28 March 1956, Grotewohl condemned abuses in the legal system. He denounced illegal arrests, called for more respect for civil rights, and even asked the parliament to develop lively debate. He also made a veiled criticism of Justice Minister Hilde Benjamin's notoriously heavy-handed handling of political trials. He retained his posts due to the Kremlin's trust in him.

In 1960 he was diagnosed with leukemia, from which he died on 23 September 1964.[1] However, he had not been fully active since 1961, when he began receiving medical treatment in the Soviet Union.

File:Grotewohl-tomb.JPG
His tomb in Berlin

He was awarded the Order of Karl Marx, the GDR's highest decoration, in 1952 and also the Soviet Union's Order of Lenin, the GDR's Order of Merit for the Fatherland in gold and he was a freeman of the city of Dresden. After his death, the Wilhelmstrasse in East Berlin was renamed Otto-Grotewohl-Straße in his honor; the street retained this name until 1991, following German reunification. On 15 April 1986, the present-day Mohrenstraße U-Bahn station in eastern Berlin, then known as the Thälmannplatz station, was also renamed Otto-Grotewohl-Straße. The Third German School in Chapayesky Lane, Moscow, was named Otto Grotewohl School.

Grotewohl was married to Marie Martha Louise, née Ohst, from 1919 until 1949 and the couple had two children, one of whom, Hans Grotewohl (1924–1999), was an architect who was sent by his father to lead a German Work Team for rebuilding Hamhung, North Korea in 1954. In 1949 he married his secretary Johanna Schumann, née Danielzik. He was an avid artist, painter, and amateur filmmaker.