Otto Kretschmer (1 May 1912 – 5 August 1998) was the most successful German U-boat commander in the Second World War and later an admiral in the Bundesmarine. From September 1939 until being captured in March 1941, he sank 47 ships, a total of 274,333 tons. For this he received the Knight's Cross of the Iron Cross with Oak Leaves and Swords (German: Ritterkreuz des Eisernen Kreuzes mit Eichenlaub und Schwertern), among other awards. He earned the nickname "Silent Otto" both for his successful use of the "silent running" capability of U-boats as well and for his reluctance to transmit radio messages during patrols. After the war, he served in the German Federal Navy and retired in 1970 with the rank of Flottillenadmiral (flotilla admiral, equivalent to commodore).

Otto Kretschmer was born in Heidau, Neisse. At the age of seventeen he spent eight months living in England at Exeter, where he learned to speak English fluently. He joined the Reichsmarine in April 1930, attaining the rank of Seekadett (naval cadet) after completing officer training courses as well as three months aboard the training ship Niobe (1 July 1930 – 9 October 1930). He then spent a little over a year serving aboard the light cruiser Emden (10 October 1930 – 4 January 1932). In the second half of 1932 he briefly served on the survey vessel Meteor for navigation training. In December 1934 he was transferred to another light cruiser, the Köln. Kretschmer remained aboard the Köln until he was transferred to the U-Boat force in January 1936, where he received extensive officer training and was promoted to Oberleutnant zur See.

Kretschmer's first command was the U-35, a Type VIIA U-Boat, in 1937. This appointment coincided with Germany's involvement in the Spanish Civil War; the boat was ordered to patrol an area off the Spanish coast. U-35 returned to Germany after an uneventful patrol during which no ships were sunk. In September 1937, Kretschmer took command of U-23, a Type IIB coastal U-Boat. 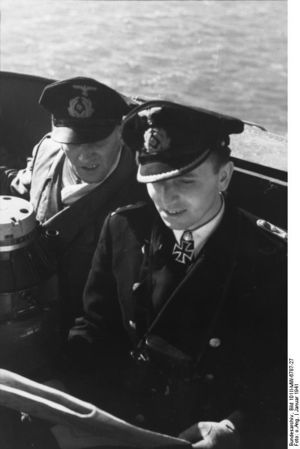 The German invasion of Poland found Kretschmer still in command of U-23, he was soon sent into action along with the rest of the Kriegsmarine's U-Boat fleet. His first war patrols ranged across the North Sea and around the British coast. His initial success came in the Moray Firth where he attacked and sank the Danish 10,517 ton tanker Danmark on 12 January 1940, using torpedoes. The British admiralty at that time thought that the tanker had struck a mine as they did not suspect there was a U-boat in the area. On 18 February, Kretschmer sank the 1,300 ton British fleet destroyer Daring off the Pentland Firth while she was escorting convoy HN-12 from Norway. U-Boat crews almost always avoided deliberately engaging enemy destroyers, so Daring's destruction was rightly seen as a very skillful attack by both Kretschmer and U-23.

In April 1940, after eight patrols, Kretschmer was transferred to the newly completed Type VII B U-99, and in a sense began his legacy. After two months' training and shakedown maneuvers in German waters, Kretschmer took the boat into action in June 1940. During U-99's first four patrols, Kretschmer commenced attacking convoys at night on the surface, sinking merchant ships with highly accurate shots, using only one torpedo per target ship; the quote "one torpedo ... one ship" is attributed to Kretschmer around this time. Kretschmer's tactics were widely copied throughout the U-Boat force, although they achieved mixed results.

His most successful patrol occurred in November and December 1940 when U-99 sank three British armed merchant cruisers (AMC), HMS Laurentic (18,724 tons), HMS Patroclus (11,314 tons) and HMS Forfar (16,402 tons). Laurentic and Patroclus were attacked on the night of 3/4 November after they responded to distress calls from the 5,376 ton British freighter Casanare, which U-99 had mortally wounded about 250 miles west of Ireland. Forfar was sunk on 2 December while steaming to join up with and escort the outbound convoy OB-251. The three AMCs totalled over 46,000 gross tons. These three successes earned Kretschmer the number-one spot on the Aces list, and was never surpassed. Klaus Bargsten served aboard U-99 under Kretschmer, before being promoted to captain himself and becoming the sole survivor of U-521 on 2 June 1942. Siegfried von Forstner was another of Kretschmer's student officers aboard U-99 who later received the Knight's Cross of the Iron Cross for sinking 15 ships as commanding officer of U-402.[1]

Kretschmer was meticulous in his conduct towards the crews of torpedoed ships. When attacking lone merchantmen in the days before wolfpack tactics began in earnest, he had been known to hand down bottles of spirits and blankets into lifeboats and give them a course to the nearest land. On one patrol in September 1940, Kretschmer had also recovered a survivor of another torpedo attack who was alone in the Atlantic on a small raft and took him aboard, transferring him to a lifeboat after his next successful attack.[2][page needed]

On his last patrol in March 1941, he sank 10 more ships, but these were to be his last victims. On 17 March 1941, during a counterattack by the British escorts of Convoy HX-112, U-99 was disabled after repeated depth charge attacks by the destroyers Walker and Vanoc. Kretschmer surfaced and, under fire from the British vessels, scuttled his boat. Three of his men were lost, but Kretschmer and the remainder of U-99's crew were captured. That same day the British escorts scored another success against the Kriegsmarine when the noted U-Boat skipper, Joachim Schepke, was killed aboard U-100, having been depth charged, rammed and sunk by Vanoc.

Kretschmer's usual standards of conduct were evident during the sinking of his boat. He signalled Walker asking for rescue for his men, taking care to ensure as many left the submarine as possible, and assisted some of his crew towards the rescue nets hung from the British destroyer. Kretschmer's strength was evidently failing in the cold ocean; his own rescue was at the hands of a British sailor who climbed down the nets and plucked him from the water.[2][page needed]

A prisoner of war and postwar career 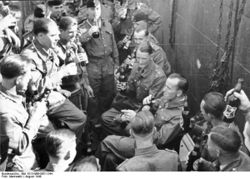 Following his capture he spent almost seven years as a POW (prisoner of war) in the hands of the British at No1 POW-camp Grizedale Hall and the Canadians. In 1943, the German command tried to rescue him (in Operation Kiebitz) but that daring plan failed. Four of those years were spent in Canada at Bowmanville POW camp. In December 1947 he was allowed to return to Germany.

Like several other surviving German naval veterans, Kretschmer joined the post-World War II German Navy, the Bundesmarine. He joined the newly formed service in 1955 and two years later was appointed commanding officer of the 1. Geleitgeschwader (1st Escort Squadron). The next year he was transferred to the position of commander of the Bundesmarine's Amphibische Streitkräfte ("amphibious forces"). From 1962 he served as a staff officer in NATO before becoming chief of staff of the NATO command COMNAVBALTAP at Kiel in May 1965. He retired in September 1970 as a flotilla admiral.

In later years Kretschmer was often interviewed for television and radio programmes about the Second World War; he appeared in the British 1974 documentary series The World at War. In the mid-1990s he was interviewed for the computer simulation game Aces of the Deep, as one of several former U-boat skippers whose input was excerpted specially for the CD-Rom version of the game.

While on vacation in Bavaria in the summer of 1998, he died in an accident on a boat on the Danube, while celebrating his 50th wedding anniversary, aged eighty-six. He was cremated and his ashes were scattered at sea.