Otto Neurath (German: [ˈnɔʏʀaːt]; December 10, 1882 – December 22, 1945) was an Austrian philosopher of science, sociologist, and political economist. Before he fled his native country in 1934, Neurath was one of the leading figures of the Vienna Circle.

Neurath was born in Vienna, the son of Wilhelm Neurath (1840–1901), a well-known political economist at the time. Helene Migerka was his cousin.[1] He studied mathematics in Vienna and gained his Ph.D. in the department of Political Science and Statistics at the University of Berlin.

He married Anna Schapire in 1907. She died as a result of childbirth (Paul Neurath) in 1911, and he married a close friend, the mathematician and philosopher Olga Hahn. Perhaps because of his wife's blindness and then because of the outbreak of war, his son, Paul Neurath was sent to a children's home outside Vienna, where Neurath's mother lived, and returned to live with both of his parents when he was nine years old.

Neurath taught political economy at the Neue Wiener Handelsakademie (New College of Commerce, Vienna) until war broke out. Subsequently he directed the Department of War Economy in the War Ministry. In 1917 or 1918, he became director of the Deutsches Kriegswirtschaftsmuseum (German Museum of War Economy, later the Deutsches Wirtschaftsmuseum) at Leipzig. Here he worked with Wolfgang Schumann, known from the Dürerbund for which Neurath had written many articles. During the political crisis which led to the armistice, Schumann urged him to work out a plan for socialization in Saxony.[2] Neurath joined the German Social Democratic Party in 1918-19 and ran an office for central economic planning in Munich. When the Bavarian Soviet Republic was defeated, Neurath was imprisoned but returned to Austria after intervention from the Austrian government. While in prison he wrote "Anti-Spengler", a critical attack on Oswald Spengler's "Decline of the West".

In Red Vienna, he joined the Social Democrats and became secretary of the Austrian Association for Settlements and Small Gardens (Verband für Siedlungs-und Kleingartenwesen), a collection of self-help groups that set out to provide housing and garden plots to its members. In 1923, he founded a new museum for housing and city planning called Siedlungsmuseum. In 1925 he renamed it Gesellschafts- und Wirtschaftsmuseum in Wien (Museum of Society and Economy in Vienna)[3] and founded an own association for it, in which the Vienna city administration, the trade unions, the Chamber of Workers and the Bank of Workers became members, then mayor Karl Seitz having acted as first proponent of the association. Julius Tandler, city councillor for welfare and health, served at the first board of the museum together with other prominent social democratic politicians. The museum was provided with exhibition rooms at buildings of the city administration, the most prominent being the People's Hall at the Vienna City Hall. To make the museum understandable for everybody, Neurath worked on graphic design and visual education. With the illustrator Gerd Arntz and with Marie Reidemeister (who he would marry in 1941), Neurath created Isotype, a symbolic way of representing quantitative information via easily interpretable icons. At international conventions of city planners, Neurath presented and promoted his communication tools.

During the 1920s, Neurath also became an ardent logical positivist, and was the main author of the Vienna Circle manifesto. He was the driving force behind the Unity of Science movement and the International Encyclopedia of Unified Science. During the 1930s, he also began promoting Isotype as an International Picture Language, connecting it both with the adult education movement and with the Internationalist passion for new and artificial languages, although he stressed in talks and correspondence that Isotype was not intended to be a stand-alone language, and was limited in what it could communicate.

During the Austrian Civil War of 1934, Neurath had been working in Moscow. Anticipating problems, he had asked to get a coded message in case it would be dangerous for him to return to Austria. As Marie Reidemeister reported later, after receiving the telegram "Carnap is waiting for you" Neurath chose to travel to The Hague, the Netherlands instead of Vienna, where he could continue his international work. He was joined by Arntz after affairs in Vienna had been sorted out as best they could. His wife also fled to the Netherlands where she died in 1937.

After the Luftwaffe bombing of Rotterdam he and Marie Reidemeister fled to England, crossing the Channel with other refugees in an open boat. He and Reidemeister married in 1941, after a period interned on the Isle of Man (Neurath was in Onchan camp). In England, he and his wife set up the Isotype Institute in Oxford and he was asked to advise on, and design Isotype charts for, the intended redevelopment of the slums of Bilston, near Wolverhampton.

Neurath died, suddenly and unexpectedly, in December 1945. After his death, Marie Neurath continued the work of the Isotype Institute, publishing Neurath's writings posthumously, completing projects he had started and writing many children's books using the Isotype system, until her death in the 1980s. 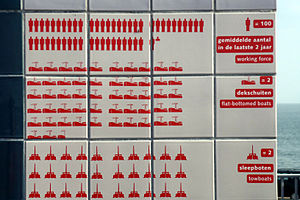 Most work by and about Neurath is still available only in German. However he also wrote in English, using Ogden's Basic English. His scientific papers are held at the Noord-Hollands Archief in Haarlem; the Otto and Marie Neurath Isotype Collection is held in the Department of Typography & Graphic Communication at the University of Reading in England.

Philosophy of science and language

One of Neurath's later and most important works, Physicalism, completely transformed the nature of the logical positivist discussion of the program of unifying the sciences. Neurath delineates and explains his points of agreement with the general principles of the positivist program and its conceptual bases:

He then rejects the positivist treatment of language in general and, in particular, some of Wittgenstein's early fundamental ideas.

First, Neurath rejects isomorphism between language and reality as useless metaphysical speculation, which would call for explaining how words and sentences could represent things in the external world. Instead, Neurath proposed that language and reality coincide—that reality consists in simply the totality of previously verified sentences in the language, and "truth" of a sentence is about its relationship to the totality of already verified sentences. If a sentence fails to "concord" (or cohere) with the totality of already verified sentences, then either it should be considered false, or some of that totality's propositions must be modified somehow. He thus views truth as internal coherence of linguistic assertions, rather than anything to do with facts or other entities in the world. Moreover, the criterion of verification is to be applied to the system as a whole (see semantic holism) and not to single sentences. Such ideas profoundly shaped the holistic verificationism of Willard Van Orman Quine. Quine's book Word and Object (p. 3f) made famous Neurath's analogy which compares the holistic nature of language and consequently scientific verification with the construction of a boat which is already at sea:

We are like sailors who on the open sea must reconstruct their ship but are never able to start afresh from the bottom. Where a beam is taken away a new one must at once be put there, and for this the rest of the ship is used as support. In this way, by using the old beams and driftwood the ship can be shaped entirely anew, but only by gradual reconstruction.

Neurath also rejected the notion that science should be reconstructed in terms of sense data, because perceptual experiences are too subjective to constitute a valid foundation for the formal reconstruction of science. Thus, the phenomenological language that most positivists were still emphasizing was to be replaced by the language of mathematical physics. This would allow for the required objective formulations because it is based on spatio-temporal coordinates. Such a physicalistic approach to the sciences would facilitate the elimination of every residual element of metaphysics because it would permit them to be reduced to a system of assertions relative to physical facts.

Finally, Neurath suggested that since language itself is a physical system, because it is made up of an ordered succession of sounds or symbols, it is capable of describing its own structure without contradiction.

These ideas helped form the foundation of the sort of physicalism which remains the dominant position in metaphysics and especially the philosophy of mind.

In economics, Neurath was notable for his advocacy of ideas like "in-kind" economic accounting in place of monetary accounting. In the 1920s, he also advocated Vollsozialisierung, that is "complete" rather than merely partial "socialization".[5] Thus, he advocated changes to the economic system that were more radical than those of the mainstream Social-Democratic parties of Germany and Austria. In the 1920s, Neurath debated these matters with leading Social Democratic theoreticians (such as Karl Kautsky, who insisted that money is necessary in a socialist economy). While serving as a government economist during the war, Neurath had observed that "As a result of the war, in-kind calculus was applied more often and more systematically than before.... war was fought with ammunition and with the supply of food, not with money" i.e. that goods were incommensurable. This convinced Neurath of the feasibility of economic planning in terms of amounts of goods and services, without use of money.[6][7] In response to these ideas, Ludwig von Mises wrote his famous essay of 1920, "Economic Calculation in the Socialist Commonwealth".[8]

For Neurath, war economies showed advantages in speed of decision and execution, optimal distribution of means relative to (military) goals, and no-nonsense evaluation and utilization of inventiveness. Two disadvantages which he perceived as resulting from centralized decision-making were a reduction in productivity and a loss of the benefits of simple economic exchanges; but he thought that the reduction in productivity could be mitigated by means of "scientific" techniques based on analysis of work-flows etc. as advocated by Frederick Winslow Taylor. Neurath believed that socio-economic theory and scientific methods could be applied together in contemporary practice.

Neurath's view on socioeconomic development was similar to the materialist conception of history first elaborated in classical Marxism, in which technology and the state of epistemology come into conflict with social organization. In particular, Neurath, influenced also by James George Frazer, associated the rise of scientific thinking and empiricism / positivism with the rise of socialism, both of which were coming into conflict with older modes of epistemology such as "magical thinking" and theology (which was allied with idealist philosophy), the latter of which served reactionary purposes. Adherents of the scientific view of the world recognize no authority other than science and reject all forms of metaphysics. Under the socialist phase of history, Neurath predicted that the scientific worldview would become the dominant mode of thought.[9]