pronunciation (help·info), Russian: О́тто Вильге́льмович Ку́усинен) (4 October 1881 – 17 May 1964) was a Finnish and, later, Soviet politician, literary historian, and poet who, after the defeat of the Reds in the Finnish Civil War, fled to the Soviet Union, where he worked until his death.

Kuusinen was born to the family of village tailor Wilhelm Juhonpoika Kuusinen in Laukaa, Finland. Otto's mother died when he was two years old, and the family then moved to Jyväskylä. Kuusinen graduated from the Jyväskylä lyceum in May 1900 and entered Helsinki University the same year. His main subjects were philosophy, aesthetics, and art history. Kuusinen was an active member of the students' union, and during this period he was interested in Fennoman conservatism and Alkioism. Kuusinen graduated as a Candidate of Philosophy in 1902.

Civil War and flight to the Soviet Union

After toppling the more moderate party chairman J. K. Kari in 1906, Kuusinen came to dominate Finland's Social Democratic Party. He was a member of Finland's Parliament 1908–1913 and the party's chairman 1911–1917. He was a leader of the January 1918 revolution in Finland that created the short-lived Finnish Socialist Workers' Republic, of which he was appointed People's Commissar of Education.[1] After the republic was defeated in the Finnish Civil War in 1918, Kuusinen fled to Moscow and helped form the Finnish Communist Party.

Kuusinen continued his work as a prominent leader of the Comintern in Bolshevist Russia, that soon became the Soviet Union. Kuusinen also became a leader in Soviet military intelligence, establishing an intelligence network against the Scandinavian countries.[2] In Finland, a more moderate faction rehabilitated the Social Democrats under Väinö Tanner's leadership. Meanwhile, Kuusinen and other radicals were increasingly seen as responsible for the Civil War and its aftermath.

Animosity towards socialists in Finland in the decades after the civil war prompted many Finns to emigrate to Russia to "build socialism." However, the Soviet Great Purge was a hard blow to Finns in the Soviet Union. Most of those who didn't escape back to Finland were executed as unreliables in the 1930s,[3][4][5][6] and Kuusinen's reputation in Finland was further damaged when he turned out to be one of the very few not targeted by Stalinist show trials, deportations, and executions.

Head of the Terijoki Government 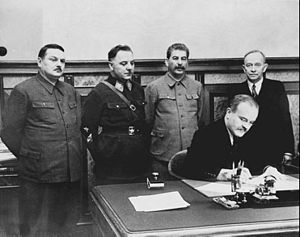 The Soviet leadership signed a treaty with the Finnish Democratic Republic. Standing, from left to right are Andrei Zhdanov, Kliment Voroshilov, Stalin, and Kuusinen. Seated is Vyacheslav Molotov.

When the Red Army began its advance during the Winter War on November 30, 1939, Kuusinen was pronounced head of the Finnish Democratic Republic (also known as the Terijoki Government)—Joseph Stalin's puppet regime[7][8][9][10] through which Stalin intended to rule Finland. A "Declaration of the People's Government of Finland" was issued in Terijoki on December 1, 1939, and a "Treaty of Mutual Assistance and Friendship Between the Soviet Union and the Democratic Republic of Finland" signed by Molotov and Kuusinen in Moscow on December 2, 1939 [1] However, the war did not go as planned, and the Soviet leadership decided to negotiate a peace with the Finnish government; Kuusinen's government was quietly disbanded and he was made chairman of the presidium of the Supreme Soviet of the Karelo-Finnish SSR (1940–1956).

From the very outset of the war, working-class Finns stood behind the legal government in Helsinki.[11] Finnish national unity against the Soviet invasion was later called the spirit of the Winter War.[12]

Member of the Politburo

Kuusinen became an influential official in the Soviet state administration. He was a member of the Politburo, the highest state organ. Kuusinen also continued his work during the administration of Nikita Khrushchev (1953–1964). He was Secretary of the Central Committee of the Communist Party of the Soviet Union 1957–1964. In 1952 and again in 1957 he was also elected to the Presidium of the Central Committee.

Kuusinen was one of the editors of The Fundamentals of Marxism-Leninism, considered to be one of the fundamental works on dialectical materialism and Leninist communism. In Kremlin politics he was considered a liberal — and from its temporal distance his thinking pointed forward to perestroika.[citation needed] While editing a new party programme for "rapid agricultural, industrial, and technological development" he championed giving up the concept of the dictatorship of the proletariat,[citation needed] to the horror of more conservative ideologists. In this he was supported by Khrushchev.

Kuusinen was elected a member of the Soviet Academy of Sciences in 1958.

After learning that he was terminally ill, Kuusinen requested (via the Helsinki Embassy of the Soviet Union) permission to visit Laukaa and Jyväskylä as a private person. The government of Finland denied this request.

Kuusinen died in Moscow on May 17, 1964. His ashes were buried in the Kremlin Wall Necropolis. He was survived by his daughter Hertta Kuusinen, a leading communist politician in Finland during the Cold War.

Kuusinen was married several times, and had numerous children, such as Aino Elina (born 1901), Hertta Elina (born 1904), Esa Otto Wille (born 1906), Riikka-Sisko (born 1908), Heikki (born 1911) and Taneli (born 1913). Most of his offspring remained with his first wife Saima Dahlström. In early 1920s Kuusinen married Aino Sarola. In 1936, he fell in love with an Armenian, Marina Amiragova, who was 30 years younger than he; and they stayed together until Kuusinen's death. The couple never married. They had a daughter in 1937 who died at the age of eleven months.

His wife Aino Kuusinen was interned in the Gulag-system from 1939 to 1955. Wolfgang Leonhard in 1972 published Aino's book Der Gott stürzt seine Engel (English edition: Before and after Stalin. A personal account of Soviet Russia from the 1920s to the 1960s).[14]