Our Lady of La Vang 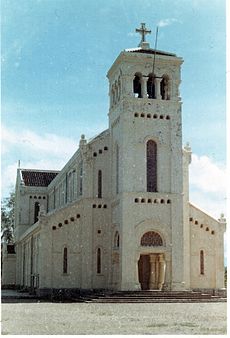 Fearing the spread of the Catholicism, the Cảnh Thịnh Emperor restricted the practice of Catholicism in the country in 1798. Soon thereafter, the emperor issued an anti-Catholic edict in which persecution ensued.

Many people sought refuge in the rain forest of La Vang in Quảng Trị Province, Vietnam, and many became very ill. While hiding in jungle, the community gathered every night at the foot of a tree to pray the rosary. One night, an apparition surprised them. In the branches of the tree a lady appeared, wearing the traditional Vietnamese áo dài dress and holding a child in her arms, with two angels beside her. The people present interpreted the vision as the Virgin Mary and the infant Jesus Christ. They said that Our Lady comforted them and told them to boil leaves from the trees for medicine to cure the illness. Legend states that the term "La Vang" was a derivative of the Vietnamese word meaning "crying out". Modern scholars believe it comes from the ancient practice of naming a location for a genus of a tree or plant native to the area, La meaning "leaf" and '"Vang "herbal seeds".

Though there is no official Vatican recognition of this event as a Marian apparition, on June 19, 1998, Pope John Paul II publicly recognized the importance of Our Lady of La Vang and expressed desire to rebuild the La Vang Basilica in commemoration of the 200th anniversary of the first vision.[1]

Media related to Our Lady of La Vang at Wikimedia Commons