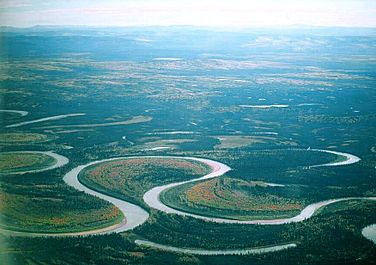 This picture of the Nowitna River, Alaska shows two oxbow lakes - a short one at the bottom of the picture and a longer, more curved one at the middle-right. Furthermore, it can be clearly seen how a third oxbow lake is in the making. The isthmus or bank in the centre of the most prominent meander is very narrow - much narrower than the width of the river. Eventually the two sections of river on either side of the isthmus will break through and create a new, straighter course. A new river bank then starts to accumulate, sealing off the meander and leaving another oxbow lake.

An oxbow lake is a U-shaped body of water that forms when a wide meander from the main stem of a river is cut off, creating a free-standing body of water. This landform is so named for its distinctive curved shape, resembling the bow pin of an oxbow. In Australia, an oxbow lake is known as a billabong, from the indigenous language Wiradjuri. In south Texas, oxbows left by the Rio Grande are called resacas.

The word "oxbow" can also refer to a U-shaped bend in a river or stream, whether or not it is cut off from the main stream.[1][2] 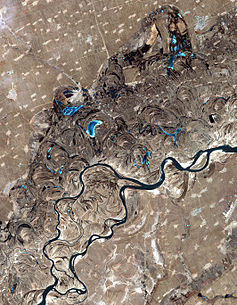 When a river reaches a low-lying plain, often in its final course to the sea or a lake, it meanders widely. In the vicinity of a river bend, deposition occurs on the convex bank (the bank with the smaller radius). In contrast, both lateral erosion and undercutting occur on the cut bank or concave bank (the bank with the greater radius.) Continuous deposition on the convex bank and erosion of the concave bank of a meandering river cause the formation of a very pronounced meander with two concave banks getting closer. The narrow neck of land between the two neighboring concave banks is finally cut through, either by lateral erosion of the two concave banks or by the strong currents of a flood. When this happens, a new straighter river channel is created and an abandoned meander loop, called a cutoff, is formed. When deposition finally seals off the cutoff from the river channel, an oxbow lake is formed. This process can occur over a time scale from a few years to several decades and may sometimes become essentially static.

Gathering of erosion products near the concave bank and transporting them to the convex bank is the work of the secondary flow across the floor of the river in the vicinity of a river bend. The process of deposition of silt, sand and gravel on the convex bank is clearly illustrated in point bars.[3]

River flood plains that contain rivers with a highly sinuous platform are populated by longer oxbow lakes than those with low sinuosity. This is because rivers with high sinuosity have larger meanders, and greater opportunity for longer lakes to form. Rivers with lower sinuosity are characterized by fewer cutoffs and shorter oxbow lakes due to the shorter distance of their meanders.[4]

The boundary layer that flows along the river floor does not move fast enough to balance the pressure gradient laterally across the river. It responds to this pressure gradient, and its velocity is partly downstream and partly across the river toward the convex bank.[3][5] As it flows along the floor of the river, it sweeps loose material toward the convex bank. This flow of the boundary layer is significantly different from the speed and direction of the primary flow of the river, and is part of the river's secondary flow. 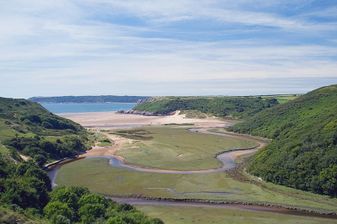 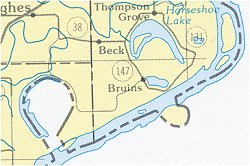 A Horseshoe or oxbow lake near Hughes, Arkansas. The bulges in the border reflect changes in the course of the river; when the river shifted its course and cut off the former channel, the border remained unchanged.

Oxbow lakes may be formed when a river channel is straightened artificially to improve navigation or for flood alleviation. This occurred notably on the upper Rhine in Germany in the nineteenth century.[6]

An example of an entirely artificial waterway with oxbows is the Oxford Canal in England. When originally constructed, it had a very meandering course, following the contours of the land, but the northern part of the canal was straightened out between 1829 and 1834, reducing its length from 91 to 77 and a half miles (approximately) and creating a number of oxbow-shaped sections isolated from the new course.[7]