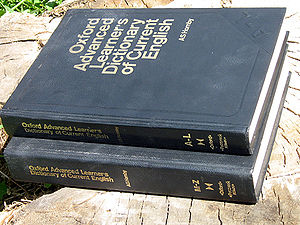 The Oxford Advanced Learner's Dictionary (OALD) was the first advanced learner's dictionary of English. It was first published 74 years ago. It is the largest English-language dictionary from Oxford University Press aimed at a non-native audience. Users with a more linguistic interest, requiring etymologies or copious references, usually prefer the Concise Oxford English Dictionary, or indeed the magnum opus, the Oxford English Dictionary, or other dictionaries aimed at speakers of English with native-level competence.

The dictionary was first published in 1948; the current edition is the ninth. It is now published on paper and as a CD-ROM (ISBN 0-19-479900-X); the latter includes many etymologies. The following editions exist:

The Oxford Advanced Learner's Dictionary, previously entitled the Oxford Advanced Learner's Dictionary of Current English, started life as the Idiomatic and Syntactic Dictionary, edited by Albert Sydney Hornby. It was first published in Japan in 1942. It then made a perilous wartime journey to Britain where it came under the wing of OUP, which decided it would be the perfect counterpart for the prestigious OED.

A. S. Hornby was a teacher of English studies at a small college in Japan; he had gone there in 1923 to teach literature, but his experiences in the classroom drew his attention to the need for sound principles of language teaching. At that time Harold E. Palmer headed the Institute for Research into English Teaching in Tokyo, and in 1931 he invited Hornby to work on vocabulary development at the Institute. The result of this was the Idiomatic and Syntactic Dictionary, published by Kaitakusha in 1942. A year before publication, Hornby had managed to send an advance copy in sheets of the book to B. Ifor Evans at the British Council, a tough feat during the war. Ifor Evans offered him a job, and in 1942 Hornby came back to Britain and joined the Council, which posted him to Iran.

The sheets reached Humphrey S. Milford, then publisher to the University of Oxford and effectively OUP's managing director. Milford saw immediately that the dictionary could fill a troublesome gap in the Press's lists, since it was compiled for non-English speakers and rested on Hornby's solid experience in teaching the language overseas. Thus it explained spelling, grammar, phonetics, and usage much more extensively than would a dictionary for native English speakers. With the cachet of the Press to promote it, it could take the "Oxford dictionary" brand to readerships that might be intimidated or puzzled by the more magisterial OED.

But the command economy of World War II under which all British publishers were then operating posed a problem: everything was in short supply, and Milford appealed to the British Council for help in getting the paper and cloth.[1] He referred the matter to E.C. Parnwell, who was looking after the Press’s overseas projects, Milford being by then too unwell to manage the Press without substantial assistance, as he had been doing since 1904.[1]

Hornby had brought with him the world rights to the book excluding Japan and China; Kenneth Sisam, then Secretary to the Delegates of the Press, gave a favourable report to the Delegates on the book. Milford also cleverly used the current state of hostility with Japan to push for a subsidy from the British Council, although all he actually said was that "the Japanese are very cheap producers" and were likely to capture the market.

The book had more than 1,500 pages and for an edition of 10,000 copies would need ten tons of paper. Milford applied for a special release to acquire this paper "in the direct interest of British culture and overseas trade, particularly in the non-sterling areas". He had adequate paper stock to begin the edition but this was all earmarked for "essential reprints" and he could only use it if replacements were guaranteed.[2] Milford's niece, Eleanor M. Booker, was now working at the India Office, and he lobbied for paper through her.

Finally the book came out between 1943 and 1948 and became an instant success. Today it is one of the most used resources by learners of the English language worldwide.

The book is useful for all competitive exams.