Oxford Brookes University is a new university in Oxford, England. It can trace its origins to 1865 when the former Oxford School of Art was established. The university was renamed in 1992 to honour its former principal, John Henry Brookes. The university's School of Architecture is one of the largest in Britain.

In 2015 it was ranked 324th in the world according to the QS World University Rankings (122nd for Social Sciences and Management), and is in the 401-500 bracket according to Times Higher Education's 2015-2016 list of the top 800 universities in the world. Oxford Brookes is the sixth largest employer in Oxfordshire.[4]

Oxford Brookes started in 1865 as the Oxford School of Art, located in a single room on the ground floor of the Taylor Institution at St Giles', Oxford.[5] In 1870 the School of Science was added and in 1891, under the administration of the City Council's Technical Instruction Committee, it was renamed the Oxford City Technical School, incorporating the School of Art, which remained distinct. Plans were made to relocate to the former Blue Coat School for Boys on St. Ebbes.

In 1934 the School of Art and the Technical School were merged and John Henry Brookes, Head of the School of Art and Vice Principal of the Technical School, was appointed the first principal of the merged institution.[6] By 1950 the college had 4,000 students. A new campus was built on a site offered by the local Morrell brewing family. Renamed "Oxford College of Technology", it opened on the new site in 1956.[6] Its first residence hall was established in 1960 and the college relocated to Headington in 1963.

In 1970, it became Oxford Polytechnic, and in 1992, following enactment of the Further and Higher Education Act, it became Oxford Brookes University, the only one of the new universities to be named after its founder.[citation needed]

In October 2003, Oxford Brookes University became the first university in the world to be awarded Fairtrade status.[7]

In 2007, Graham Upton retired as Vice-Chancellor and his successor, Janet Beer, was inaugurated in September. In July 2008, Shami Chakrabarti, Director of Liberty, replaced Jon Snow as chancellor of the university.

Oxford Brookes University has three main campuses and a fourth in Swindon.

The Headington campus is in a residential area of Oxford. It consists of the Gipsy Lane site, which is the main teaching site, the Marston Road site, which houses the school of Health and Social Care, and the Headington Hill site across the road from Gipsy Lane, where the Students' Union, the School of Law,[8] the School of Arts, the Drama Studio and main halls of residence are located. It has six halls of residence: Crescent Hall, Cheney Student Village, Clive Booth Hall, Clive Booth Non-Ensuite (formerly Morrell Hall), Warneford Hall and Paul Kent Hall. 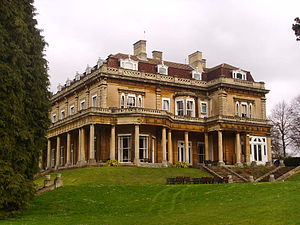 Headington Hill Hall, the home of the School of Law

The Wheatley campus is near Wheatley in the Oxfordshire countryside, seven miles south-east of the city centre, and is where business, IT, mathematics and engineering are taught.

The Harcourt Hill campus is situated on Harcourt Hill on Oxford's western perimeter, two and a half miles from the city centre. Education, Philosophy, Religion, Theology, Media and Communication, and many other subjects are taught here. It has two halls of residence: Harcourt Hill Hall and Westminster Hall. A regular devoted bus service links the campus to other campuses at Headington and Wheatley.

The Ferndale campus is in Swindon, about 30 miles (48 km) south-west of Oxford. Adult Nursing, Operating Department Practice (ODP) and a range of Continuing Professional Development (CPD) courses are taught there. It has its own Osteopathic training clinic on-site offering services to staff, students and the public. 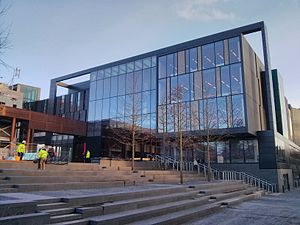 The front of the new 'John Henry Brookes' building.

The university is redeveloping its campuses. Plans include a new library and teaching building acting as a core for the Gipsy Lane campus and an extension to the Abercrombie building for the School of the Built Environment.[9] The Students' Union, originally housed in the Helena Kennedy Centre in Headington Hill, will be moved to the new development at Gipsy Lane.

The proposals were vigorously opposed by local residents in 2009 when presented to the local planning committee, with many undesirable aspects of the large student population in Oxford being discussed. However, the plans for the new building were eventually approved and building work began in 2010.

In September 2011 Oxford Brookes moved from eight schools to four faculties[10] which sit across its four campuses.

Faculty of Health and Life Sciences

Faculty of Humanities and Social Sciences

Faculty of Technology, Design and Environment

The Centre for Development and Emergency Practice (CENDEP) in the School of the Built Environment was awarded the Queen's Anniversary Prize. CENDEP provides an academic setting for the study of cities, humanitarianism and refugees. Singer and activist Annie Lennox is patron of the Master's Course in Humanitarian and Development Practice.[11]

In 2008, the MSc in Primate Conservation was also awarded the Queen's Anniversary Prize.[12]

The Functional Food Centre at Oxford Brookes University is the UK's first research centre dedicated to functional foods. The centre was originally the Nutrition and Food Research Group at Oxford Brookes, founded in 2004, and was renamed in 2009.

The Department of Computing and Communication Technologies is internationally recognised for its research especially in the area of robotics, web technology, networking and software engineering. The department has a strong international student population in both its undergraduate and postgraduate programmes.

The Oxford Brookes School of Technology is known for its automotive and motorsports technology/engineering courses leading to undergraduate BSc(Hons), BEng(Hons) and MEng(Hons) degrees. Due to the close links between the school and several Formula 1 teams around Oxfordshire, the syllabus development for the undergraduate and post graduate courses are carried out in collaboration with F1 teams.[13] Over the decade, the school has developed a niche for producing Formula 1 design and race engineers,[14][15] who go on to build championship winning cars, participating in the FIA Formula 1 Championships. The school is also home and lead institution to Motorsport Knowledge Exchange[16] which is a Government-funded small cooperative of institutions, involved in delivering motorsport education at a variety of levels from technician to post-graduate.

In 2007, Formula One world champion Fernando Alonso sponsored 12 Spanish postgraduate students to study for an MSc in motorsport engineering or in race engine design within the Department of Mechanical Engineering and Mathematical Sciences at the university.[17] The university boasts a teaching staff that includes Geoff Goddard, a former chief designer at Cosworth.[18]

The School of Technology at Oxford Brookes is one of the three core universities in Faraday Advance,[19] a partnership in advanced materials for transportation that develops future materials and technology for low-pollution, high-efficiency, cost-effective transport.[20]

The School of Architecture is one of the largest in Britain and is consistently ranked in the top five schools in the UK[27] and in the top 50 in the world,[28] ranking above schools at Yale University and the University of Bath.

In the QS World University Rankings 2013/14 Oxford Brookes was ranked 374. In the most recent Research Assessment Exercise, over three-quarters of the university's research was recognised internationally, with research in law, education, the arts, sciences and health adjudged world-leading.[29]

The School of Law is the 16th placed law school in the latest Guardian Good University Guide, higher than several Russell Group law schools[30] The law school is also in the top 30 of institutions for the study of undergraduate law in the current Times/ Sunday Times Good University Guide, with law courses placed at 28th out of 100 UK university law schools.[31][32] Moreover, Law courses provided by Oxford Brookes also are ranked in the top 150-200 bracket of the QS World University Subject Rankings.[33] The University has been successful in national and international mooting competitions, in 2015 winning both the ESU Essex Court National Competition and the Inner Temple Inter-Varsity Mooting Competition, meaning the national Magna Carta moot - to celebrate the 800th anniversary of the signing of Magna Carta - as a consequence will be between two Oxford Brookes teams.[34]

Oxford Brookes University's partnership with the Association of Chartered Certified Accountants (ACCA) allows ACCA students to earn a BSc (Hons) in Applied Accounting with the submission of a research and analysis project work while taking their ACCA examinations.

Tsinghua University will recognise[when?] the Oxford Brookes University BSc Applied Accounting degree. This degree has been successfully developed in conjunction with ACCA and enables students who have completed two parts of the ACCA qualification to apply for the Oxford Brookes degree.[35]

Munich Business School is the German partner-institution of the university.

The university has a partnership with the International Business School (Nemzetközi Üzleti Főiskola) based in Budapest (Hungary). IBS students can attend courses which, besides the Hungarian degree, also provide OBU BA degrees in different subjects, such as marketing and communications.[36]

The university has affiliations with Nilai University College in Malaysia. Affiliated subjects are computing, accounting and finance, business management, marketing management and hospitality management. All the subjects mentioned above are 3+0 programs.

Oxford Brookes Students' Union is the students' union of the university and it exists to support and represent the students of Oxford Brookes. It is a member-led organisation and all students are automatically members. With a history dating back to 1921 it is one of the oldest in the country. 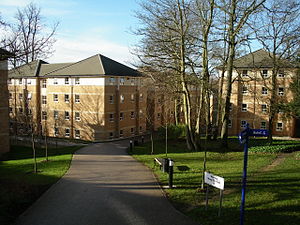 There are currently 11 Student halls of which there are four in Headington Campus, two in Harcourt Hill Campus, one in Wheatley Campus and three more halls around Headington. In addition, there are three privately operated Halls of Residence which are managed in partnership with the university by housing associations: Slade Park Student Apartments, Sinnet Court Student Apartments and Dorset House Student Apartments.