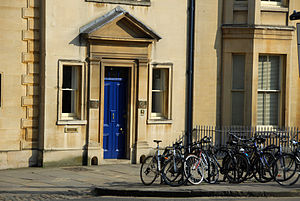 The Oxford Internet Institute (OII) is a multi-disciplinary institute, part of the University of Oxford, England. It is housed in buildings owned by Balliol College and is devoted to the study of the societal implications of the Internet, with the aim of shaping Internet research, policy, and practice. It is the main UK member of the World Internet Project.

The Oxford Internet Institute was founded in 2001 by Derek Wyatt, then MP for Sittingbourne and Sheppey, and Andrew Graham, Master of Balliol College. It had an initial endowment of £10 million from The Shirley Foundation and £5 million from the Higher Education Funding Council for England. Professor William H. Dutton served as Director of the OII from 2001 to 2011. Professor Helen Margetts has served as Director since 2011.[1]

For its 10th anniversary the OII launched the OII awards for lifetime achievement awards on the internet research field and the Internet & Society awards for significant recent contribution to develop the internet for public good.[9]