The P-800 Oniks (Russian: П-800 Оникс; English: Onyx), also known in export markets as Yakhont (Russian: Яхонт; English: ruby), is a Soviet/Russian supersonic anti-ship cruise missile developed by NPO Mashinostroyeniya as a ramjet version of P-80 Zubr. Its GRAU designation is 3M55 , air launched Kh-61 variant. Development officially started in 1983, and by 2001 allowed the launch of the missile from land, sea, air and submarine. The missile has the NATO reporting codename SS-N-26 "Strobile". It is reportedly a replacement for the P-270 Moskit, but possibly also for the P-700 Granit. The P-800 was reportedly used as the basis for the joint Russian-Indian supersonic missile BrahMos.[3]

The missile is carried in flight by aerodynamic lift. The solid-propellant booster is located in the ramjet's combustion chamber and is ejected by the airflow after it has burned out.

Over-the-horizon firing range, full autonomy of combat use ("fire and forget"), a set of flexible ("low", "high-low") trajectories, high supersonic speed on all phases of flight, full harmonization for a wide range of platforms (surface ships of all major classes, submarines and land-based launchers), low profile flight (sea-skimming), possible use of the missile in electronic countermeasures environment and under enemy fire.

In 2010 Sergei Prikhodko, senior adviser to the Russian President, has said that Russia intends to deliver P-800 to Syria based on the contracts signed in 2007.[4][5] Syria received 2 Bastion missile systems with 36 missiles each (72 in total).[6] The missiles' test was broadcast by Syrian state TV.[7]

In May 2013, Russia continued the contract delivery to the Syrian government of Bashar al-Assad supplying missiles with an advanced radar to make them more effective to counter any future foreign military invasion.[8][9] The warehouse containing the Bastion Missile was destroyed in an Israeli air strike on Latakia on 5 July 2013, but US intelligence analysts believe that some missiles had been removed before the attack.[10] 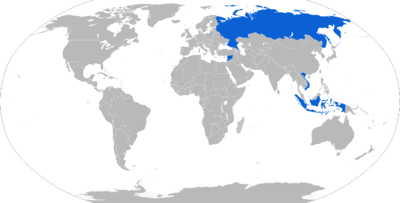 Map with P-800 operators in blue