From Infogalactic: the planetary knowledge core
(Redirected from PSAB)
Jump to: navigation, search 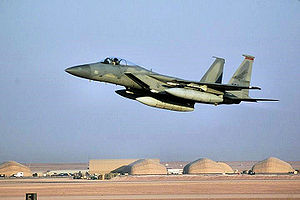 Before 11 September 2001, per agreement with the Saudi Arabian government, all U.S. and Allied aircraft stationed at PSAB were to be of a "defensive" versus "offensive" nature. This was due to Arab sensitivities that non-Royal Saudi Air Force (RSAF) aircraft in the Kingdom of Saudi Arabia should be perceived as being there for the defense of the Kingdom.

During Operation Southern Watch, this required aircraft carrying offensive strike ordnance for use against ground targets in Iraq to be stationed in Kuwait or aboard aircraft carriers in the Persian Gulf. USAF, USN, USMC, RAF and French aircraft that were based at PSAB primarily consisted of airborne early warning, reconnaissance, air refueling, electronic warfare, suppression of enemy air defenses (SEAD) and air-to-air fighter aircraft, along with transient airlift aircraft. U.S. squadrons came under the operational control of the 363d Air Expeditionary Wing (363 AEW) at PSAB, with associated squadrons or detachments prior to 11 Sep 2001 rotated in and out from their home bases in Europe, the United States or the Pacific on a 90-day to 6-month basis. During Operation Southern Watch, in addition to Active Component aircraft, the USAF made extensive use of Air National Guard (ANG) and Air Force Reserve Command (AFRC) McDonnell Douglas F-15 Eagle, General Dynamics F-16 Fighting Falcon and Boeing KC-135 Stratotanker aircraft and associated personnel on rotational assignments to PSAB. The United States Navy, Navy Reserve and United States Marine Corps also employed EA-6B aircraft from PSAB as well.

In August and early September 2001, Joint Task Force Southwest Asia (JTF-SWA) and its associated Coalition Air Operations Center (CAOC) were in the process of relocating from the Eskan Village complex in Riyadh to PSAB concurrent with construction of a more modern and expanded CAOC at PSAB. Events of 11 Sep 2001 accelerated this movement, so that subsequent command and control of all Coalition air operations for Operations Enduring Freedom and Iraqi Freedom were executed from PSAB.

In mid-2003, all U.S. operations at PSAB began migrating to Al Udeid Air Base in Doha, Qatar.

Between 2003 and 2005 Vickers VC10s from No. 101 Squadron RAF were based here in support of Operation Telic before moving to RAF Al Udeid (a section of the Al Udeid Air Base in Qatar).[4]