Pacific Islands Americans, also known as Oceanian Americans, are Americans who have ethnic ancestry of indigenous inhabitants of Oceania. The term Pacific Islander refers to those who have ancestry in Polynesia, Melanesia, and Micronesia, which are all the three major sub-regions of Oceania. American Samoa, the Northern Mariana Islands, and Guam are insular areas, while Hawaii is a state.

In the 2010 census 1,225,195 Americans claimed "'Native Hawaiian or other Pacific Islander'" as their race alone or in combination.

"Chamorro Americans", or the Chamoru, are the indigenous inhabitants of the Marianas, which are politically divided between Guam and the Commonwealth of the Northern Mariana Islands. The Chamoru have been subject to the jurisdiction of the United States since the U.S. captured Guam during the Spanish–American War in 1898. The rest of the archipelago did not become affiliated with the U.S. until it invaded in 1944. In the 2010 census, 147,798 identified as "Guamanian or Chamorro". Because of economic conditions in the Marianas, particularly from the 1990s onward, many emigrated to the States in search of work and better opportunities. There are now more Chamorros in the 50 states than there are in the Marianas.[citation needed]

According to the 2010 census, the largest Chamoru populations were located in California, Washington and Texas, but their combined number from these three states totaled less than half the number living throughout the U.S. It also revealed that the Chamoru people are the most geographically dispersed Oceanic ethnicity in the country.[6]

Marshallese American or Marshallese come from the Marshall Islands. In the 2010 census 22,434 Americans identified as being of Marshallese descent.

California has the most Samoans; concentrations live in the San Francisco Bay Area, Los Angeles County, and San Diego County. San Francisco has approximately 2,000 people of Samoan ancestry, and other Bay Area cities such as East Palo Alto and Daly City have Samoan communities. In Los Angeles County, Long Beach and Carson have abundant Samoan communities, as well as in Oceanside in San Diego County.[7][8][9] Other West Coast metropolitan areas such as Seattle have strong Samoan communities, mainly in King County and in Tacoma. Anchorage, Alaska and Honolulu, Hawaii both have thousands of Samoan Americans residing in each city.

Since the end of World War II, persons born in American Samoa are United States nationals, but not United States citizens. (This is the only circumstance under which an individual would be one and not the other.) For this reason, Samoans can move to Hawaii or the mainland United States and obtain citizenship comparatively easily. Like Hawaiian Americans, the Samoans arrived in the mainland in the 20th century as agricultural laborers and factory workers.

Elsewhere in the United States, Samoan Americans are plentiful throughout the state of Utah, as well as in Killeen, Texas and Independence, Missouri.

American Samoans are distinguished among the wider Pacific Islander group for enthusiasm for enlistment. In 2007, a Chicago Tribune reporter covering the island's military service noted, "American Samoa is one of the few places in the nation where military recruiters not only meet their enlistment quotas but soundly exceed them."[11] As of 23 March 2009[update] there have been 10 American Samoans who have died in Iraq, and 2 who have died in Afghanistan.[12]

Pacific Islander Americans are also well represented in the Navy SEALS, making up .6% of the enlisted and .1% of the officers.[13]

Zina Pistor was the first Samoan-American in the Miss USA Pageant, (Miss California USA 1985). The Los Angeles Times praised her[14] business sense for owning a frozen yogurt store while a student in USC's Entrepreneur Program, where her business plan won 1st place. As Director of Creative Affairs for Revelations Entertainment, Morgan Freeman's film and TV production company, Zina produced charity events such as "An Evening of Holiday Stories with Morgan Freeman and Friends" to benefit Steven Spielberg and Kate Capshaw's (CAN) Children's Action Network. Zina has worked with Gene Hackman, Holly Hunter and many others. She divides her time between Los Angeles and Berlin, where she lives with her family and supports educational and ecological causes (i.e., Seacology which provides eco-exchanges[15] for Pacific islanders).

Vili Fualaau is a Samoan American who made headlines with his controversial relationship with Mary Kay Letourneau.

Taylor Vaifanua (from Hurricane, Utah) is a Samoan American high school student/singer who made to the Top 36 of the reality TV show American Idol.

The most famous stage character is Bloody Mary of the South Pacific musical and movie. She is a souvenir trader to US sailors stationed in the Pacific Theater of World War II. Though originally cast as Juanita Hall, an African American, she is often also cast as an Asian or Pacific Islander American in newer local productions. 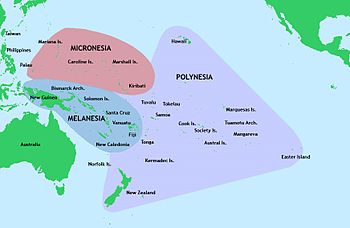 The three major sub-regions of Oceania

Basketball is quickly gaining popularity among Islanders, and NBA players such as Peyton Siva, Jabari Parker, James Johnson, Wally Rank, and Steven Adams are of Polynesian descent. Naomi Mulitauaopele is the first full-blooded Samoan female athlete to play for both American women's professional basketball leagues, the ABL and the WNBA.

Diving great Greg Louganis, although often identified with his adoptive Greek-American heritage, is of Samoan and Swedish ancestry.

As a result of the rise of Samoan communities in highly concentrated hip hop areas such as Los Angeles and Oakland, California; American Samoans like African American have built up a reputation as highly skilled dancers and athletes.[citation needed] While women were mostly restrained from their expression of hip hop dance, many Samoan men became professional dancers and entered the American music industry. Suga Pop, and Boo-Yaa T.R.I.B.E. are examples of this.[16] The involvement of Samoans in street dance and hip hop music in America has impacted the Samoan cultural production in other places where Samoans have settled. A transmission of culture between the American Samoan community and its Pacific origin (i.e. New Zealand, Hawaii) took place. This resulted in a mimicking of not only music and dance styles but of the fashion of American hip hop as well. Samoan dance crews copied the popping and locking dance forms while wearing Adidas track suits- a style very commonly associated with Queens based hip hop group Run DMC. As a result of the American Samoan community's rising recognition, performers such as Snoop Dogg and Lord Tariq have collaborated with various American-based Samoan and Pacific artists.[16]

Mufi Hannemann was mayor of Honolulu from January 2, 2005 to July 20, 2010. Mufi Hanneman is a German and Samoan American who was originally a history teacher.