Palace of the Soviets

From Infogalactic: the planetary knowledge core
(Redirected from Palace of Soviets)
Jump to: navigation, search
File:Christ the saviour.jpg
Cathedral of Christ the Saviour, postcard 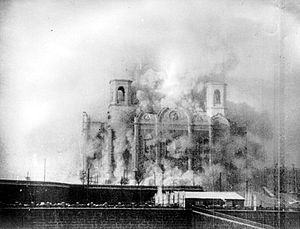 The Palace of the Soviets (Russian: Дворец Советов, Dvorets Sovetov) was a project to construct an administrative center and a congress hall in Moscow, Russia, near the Kremlin, on the site of the demolished Cathedral of Christ the Saviour. The architectural contest for the Palace of the Soviets (1931–1933) was won by Boris Iofan's neoclassical concept, subsequently revised by Iofan, Vladimir Shchuko and Vladimir Gelfreikh into a skyscraper. If built, it would have become the world's tallest structure of its time. Construction started in 1937, and was terminated by the German invasion in 1941. In 1941–1942, its steel frame was disassembled for use in fortifications and bridges. Construction was never resumed. In 1958, the foundations of the Palace were converted into what would become the world's largest open-air swimming pool, the Moskva Pool. The Cathedral was rebuilt in 1995–2000.[1]

A nearby subway station, built in 1935 as Palace of the Soviets station, was renamed Kropotkinskaya in 1957.

The Congress of Soviets officially established the Soviet Union in December 1922. Sergey Kirov, speaking at the Congress, proposed building a congress palace "on the sites of palaces once owned by bankers, landlords, and tsars". Very soon, Kirov said, existing halls would be too small to fit the delegates from new republics of the Union. The palace "will be just another push for the European proletariat, still dormant...to realize that we came for good and forever, that the ideas... of communism are as deeply rooted here as the wells drilled by Baku oilers".[2]

In 1924 the death of Vladimir Lenin and the construction of the temporary Lenin's Mausoleum resulted in a national campaign to build Lenin memorials across the country. Victor Balikhin, a graduate student at Vkhutemas, proposed to install Lenin's memorial on top of a Comintern building, on the site of Christ the Savior Cathedral. "Arc lamps will flood the villages, towns, parks and squares, calling everyone to honor Lenin even at night..."[3] Balikhin's concept, forgotten for a while, emerged later in Boris Iofan's design.

Demolition of the cathedral 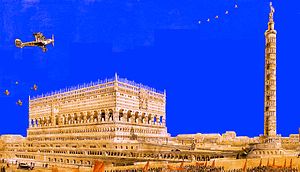 6 years later, in February 1931, the State declared the 1st contest for the Palace of the Soviets, distributing preliminary proposals to 15 architectural workshops (avant-garde & traditional architects). This contest ended in May 1931, with no winners.

On June 2, a conference of Party elders identified the site of the future Palace and condemned the Cathedral. This was formally endorsed on July 16 by the Supreme Soviet of the Soviet Union commission. July 18 (the day when Izvestia announced the 2nd, international contest), state commissioners started an inventory count of Cathedral properties. A small fraction of them were removed & stored at state expense & the expense of Donskoy Monastery; the rest perished. Demolition began on August 18; on December 5, the structure was finally destroyed in 2 rounds of explosions.[4] Hauling out the rubble took more than a year.[5]

The second, public, international contest was declared on July 18, 1931. A total of 272 concepts were collected, including 160 architectural works (136 Soviet, 24 foreign). The contest attracted international architects like Le Corbusier, Joseph Urban, Walter Gropius, Erich Mendelsohn, and Armando Brasini, Boris Iofan's Italian teacher;[6] American entries were coordinated by Albert Kahn.[7] It was the foreigner Brasini who literally expressed the idea of "Lenin atop the skyscraper" in the most clear form.[8]

Enormous publicity followed the project. In 1931–1932, it was broadcast internationally, with reviews and reports published all over the world. The Council of Experts was chaired by old Bolshevik Gleb Krzhizhanovsky; Time magazine called it "a jury whose most noteworthy member was Dictator Stalin."[9]

Instead of announcing a clear winner, in February 1932 the Council declared three leading drafts by Boris Iofan, Ivan Zholtovsky and a 28-year-old British architect living in New Jersey, Hector Hamilton.[10] This outcome called for a third round of competition—or a state intervention. All three runners-up turned their backs on the avant-garde and leaned towards neoclassicism (or eclecticism). This "reactionary" decision caused an uproar among European avant-garde artists. Le Corbusier and Sigfried Giedion, leader of the CIAM, claimed to Stalin that the "decision of the council is a direct insult to the spirit of Revolution and the Five-year plan... [it is] a tragic betrayal."[11]

File:Sovietpalace 1937 msheet.jpg
Miniature sheet of the First Congress of Soviet Architects showing the Palace of Soviets, 1937.

The international contest was followed by not one, but two more rounds of closed competition. The third contest (March–July 1932) round invited 15 design teams, the fourth (July 1932–February 1933) invited only five. On May 10, 1933, Boris Iofan's draft was declared the winner. A duo of neoclassicist architects, Vladimir Shchuko and Vladimir Gelfreikh, were assigned to Iofan's team, and the design became known as the Iofan-Schuko-Gelfreikh draft.

Recently published correspondence between Joseph Stalin and Lazar Kaganovich, however, pinpoints the moment of selection as no later than August 1932. On August 7, Stalin wrote a memo to Kaganovich, Vyacheslav Molotov and Kliment Voroshilov, clearly naming Iofan's draft as the best, and proposing changes:

Iofan's original draft was crowned with a relatively small statue of "The Free Proletarian". In August 1932, as is clear from Stalin's memo, this statue disappeared from his draft, and Stalin personally intervened to correct the omission. A taller tower and Lenin's statue appeared after the fourth contest, in response to Stalin's public speech: "The Palace of the Soviets is a monument to Lenin. Don't be scared of height; go for it."[15] In the process, the total height increased from 260 m (853 ft) to 415 m (1,362 ft). The Main Hall with a capacity of 21,000 seats was 100 m (330 ft) meters high and 160 m (525 ft) in diameter (the Little Hall in the Eastern Wing was 6,000 seats).[16] This project was released to the public in March 1934. The Lithuanian-American artist William Zorach "let out a cry of protest, charging that the Soviets had stolen an idea submitted by him for a Lenin memorial in Leningrad" in vain.[9] The statue structure was designed later; a 100 m (328 ft) 1936 version weighed in excess of 6,000 t (6,600 short tons). In 1937, Frank Lloyd Wright, addressing the Congress of Soviet Architects, remarked "This structure — only proposed I hope — is good if we take it for a modern version of Saint George destroying the dragon."[17][18] 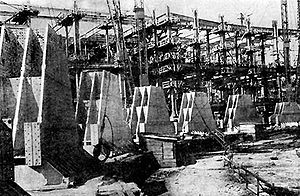 The foundation was completed in 1939. The builders drove a perimeter of 20 m (66 ft) steel piles, excavated the pit, demolished and hauled out the old cathedral foundations. The new foundation was a slightly concave concrete slab with concentric vertical rings, intended to carry the main hall columns. By June 1941, the steel frame for the lower levels was erected. Then World War II interfered: the steel frame was cut in 1941 and 1942 and used for Moscow's defense fortifications and railroad bridges. The empty foundation stood unused, filled with seepage water, but well guarded, until 1958.

Meanwhile, Iofan's team, relocated to Sverdlovsk, continued perfecting the design. After the war, Iofan produced another iteration[19] of the original concept, this time incorporating the Victory theme, literally: interior halls were decorated with Order of Victory motifs. These drafts remained unused; construction on the old site never resumed. Iofan bid for the design of the Sparrow Hills Skyscraper, but lost to Lev Rudnev. Rudnev and other post-war architects designed their towers as if the Palace existed, referencing all major projects to the Palace skyline. As an example, 1947 placement map for the Moscow Skyscrapers is centered on the Palace.[20]

The Palace project forced the development of new technologies, notably the DS (ДС, Дворец Советов) family of construction steel. ODS (ordinary DS) and SDS (special DS) steel were used in Moscow bridges built in the 1930s[21] and Moscow Canal structures. A nearby metro station, a 1935 award-winning design by Alexey Dushkin, was named Palace of the Soviets and renamed Kropotkinskaya in 1957.

As soon as the 1934 Iofan-Shuko-Gelfreikh draft was published, the Palace became a symbol in Soviet art, appearing in propaganda pictures such as those by Alexander Deineka. The unbuilt Palace animation was inserted in films (including the 1944 Six o'clock after the war made when the Mosfilm studio was evacuated to Tashkent). Images of the unbuilt Palace were copied onto real buildings like the 1937 North River Terminal. 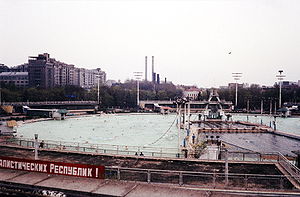 In the 1970s, the State ran an architectural contest for the new V. I. Lenin Museum on a nearby site between the Pushkin Museum and the Kremlin. Some of the competitors, however, proposed building the Museum on the site of the Moskva pool, following the Iofan concept. This project never materialized.

In literature and culture

Architectural historian Evgenia Kirichenko discusses the Palace of Soviets planning and building project in her volume on Moscow's Cathedral of Christ the Savior.[22]

Ryszard Kapuscinski describes the demolition of the cathedral and the project of building the Palace of the Soviets in a chapter of his book Imperium.

The Pritzker Prize-winning architect Rem Koolhaas describes the Palace of the Soviets in his 1995 book S,M,L,XL.

Soviet author Viktor Suvorov describes building the Palace of the Soviets as the ultimate sign of communist supremacy in the world, in the book Last Republic.