From Infogalactic: the planetary knowledge core
Jump to: navigation, search
Not to be confused with Paleocene.

The Paleogene (/ˈpæliːoʊdʒiːn/ or /ˈpeɪliːoʊdʒiːn/; also spelled Palaeogene or Palæogene; informally Lower Tertiary) is a geologic period and system that began 66 and ended 23.03 million years ago and comprises the first part of the Cenozoic Era.[4] Lasting 43 million years, the Paleogene is most notable as being the time in which mammals evolved from relatively small, simple forms into a large group of diverse animals in the wake of the Cretaceous–Paleogene extinction event that ended the preceding Cretaceous Period.[5]

This period consists of the Paleocene, Eocene, and Oligocene Epochs. The end of the Paleocene (55.5/54.8 Mya) was marked by one of the most significant periods of global change during the Cenozoic, the Paleocene–Eocene Thermal Maximum, which upset oceanic and atmospheric circulation and led to the extinction of numerous deep-sea benthic foraminifera and on land, a major turnover in mammals. The Paleogene follows the Cretaceous Period and is followed by the Miocene Epoch of the Neogene Period. The terms 'Paleogene System' (formal) and 'lower Tertiary System' (informal) are applied to the rocks deposited during the 'Paleogene Period'. The somewhat confusing terminology seems to be due to attempts to deal with the comparatively fine subdivisions of time possible in the relatively recent geologic past, when more information is preserved. By dividing the Tertiary Period into two periods instead of directly into five epochs, the periods are more closely comparable to the duration of 'periods' in the Mesozoic and Paleozoic Eras.

The global climate during the Paleogene departed from the hot and humid conditions of the late Mesozoic era and began a cooling and drying trend which, although having been periodically disrupted by warm periods such as the Paleocene–Eocene Thermal Maximum, persists today. The trend was partly caused by the formation of the Antarctic Circumpolar Current, which significantly cooled oceanic water temperatures.

The continents during the Paleogene continued to drift closer to their current positions. India was in the process of colliding with Asia, subsequently forming the Himalayas. The Atlantic Ocean continued to widen by a few centimeters each year. Africa was moving north to meet with Europe and form the Mediterranean, while South America was moving closer to North America (they would later connect via the Isthmus of Panama). Inland seas retreated from North America early in the period. Australia had also separated from Antarctica and was drifting towards Southeast Asia. 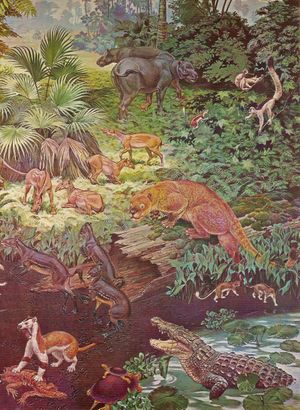 Mammals began a rapid diversification during this period. After the Cretaceous–Paleogene extinction event, which saw the demise of the non-avian dinosaurs, they transformed from a few small and generalized forms and began to evolve into most of the modern varieties we see today. Some of these mammals would evolve into large forms that would dominate the land, while others would become capable of living in marine, specialized terrestrial, and airborne environments. Some mammals took to the oceans and became modern cetaceans, while others took to the trees and became primates, the group to which humans belong. Birds, which were already well established by the end of the Cretaceous, also experienced an adaptive radiation as they took over the skies left empty by the now extinct Pterosaurs. Most other branches of life remained relatively unchanged in comparison to birds and mammals during this period.

As the Earth began to cool, tropical plants were less numerous and were now restricted to equatorial regions. Deciduous plants, which could survive through the seasonal climate the world was now experiencing, became more common. One of the most notable floral developments during this period was the evolution of the first grass species. This new plant type expanded and formed new ecological environments we know today as savannas and prairies. These grasslands also began to replace many forests because they could survive better in the drier climate typical in many regions of the world during this period.

The Paleogene is notable in the context of offshore oil drilling, and especially in Gulf of Mexico oil exploration, where it is usually referred to as the "Lower Tertiary". These rock formations represent the current cutting edge of deep-water oil discovery.