Aurignacian flute made from an animal bone, Geissenklösterle (Swabia)

A number of flutes dating to the European Upper Paleolithic have been discovered. The undisputed claims are all products of the Aurignacian archaeological culture, beginning about 43,000 to 35,000 years ago, and have been found in the Swabian Alb region of Germany. These flutes represent the earliest known musical instruments and provide valuable evidence of prehistoric music. The presence of these flutes demonstrates that a developed musical tradition existed from the earliest period of modern human presence in Europe.[1] 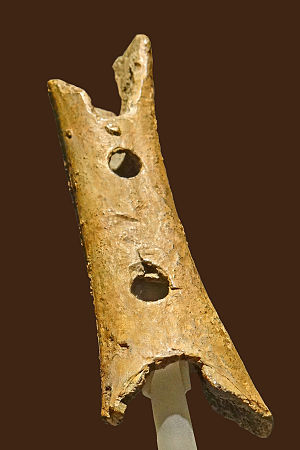 The artifact known as the Divje Babe flute, discovered in Slovenia in 1995, has been claimed as the oldest flute, though this has been disputed. The artifact is a cave bear femur, 43100 ± 700 years old, that has been pierced with spaced holes. Its discoverer suggested the holes were man made and that there may have been four originally before the item was damaged.[2] However, other scientists have argued that the holes are the result of the bone fragment having been chewed by an animal rather than by human design.[3]

Until 2012 the oldest undisputed musical instrument was the Hohle Fels Flute discovered in the Hohle Fels cave in Germany's Swabian Alb in 2008. The flute is made from a vulture's wing bone perforated with five finger holes, and dates to approximately 35,000 years ago.[1] Several years before, two flutes made of mute swan bone and one made of woolly mammoth ivory were found in the nearby Geisenklösterle cave. The team that made the Hohle Fels discovery wrote that these finds are the earliest evidence of humans being engaged in musical culture. They suggested music may have helped to maintain bonds between larger groups of humans, and that this may have helped the species to expand both in numbers and in geographical range.[4] In 2012, a fresh high-resolution carbon dating examination revealed an age of 42,000 to 43,000 years for the flutes from the Geisenklösterle cave, suggesting that they rather than the one from the Hohle Fels cave could be the oldest known musical instruments.[5][6][7]