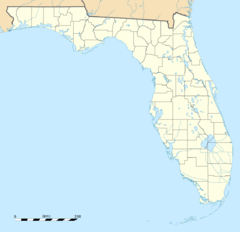 Palm Springs is a village in Palm Beach County, Florida, United States. As of 2010, the population recorded by the U.S. Census Bureau is 18,928.[3]

In 1957, Florida House of Representatives Ralph Blank, Jr. of Palm Beach County introduced legislation to establish the village of Palm Springs. The bill passed unanimously, and thus, Palm Springs was chartered on July 4, 1957.[6] The town was likely named after the resort city of Palm Springs, California.[7]

According to Palm Beach County, future annexation by the Village will include all areas west to Military Trail from the present boundaries, between Lake Worth Road and north of Forest Hill Boulevard; and all areas east of the present boundaries to Florida Mango Road. This future annexation may increase the Village's population by another 10,000 residents.[6]

There were 5,148 households out of which 26.7% had children under the age of 18 living with them, 39.7% were married couples living together, 13.5% had a female householder with no husband present, and 42.3% were non-families. 33.7% of all households were made up of individuals and 13.9% had someone living alone who was 65 years of age or older. The average household size was 2.27 and the average family size was 2.90. 8.1% of the population is homosexual.

As of 2000, Palm Springs had the fifty-first highest percentage of Cuban residents in the US, with 7.6% of the city's populace.[12] It also had the fifty-second highest percentage of Haitian residents, which was 2.9% (tied with four other areas, including Opa-locka,)[13] and the eighty-first highest concentration of Colombian residents, which made up 1.9% of the population (tied with West Miami.)[14]

Businesses, concentrated on Congress Avenue and Tenth Avenue North, include several shopping centers, the largest of which are Greenwood and Palm Springs.[6]

Palm Springs is served by the School District of Palm Beach County; the district has its headquarters in the Fulton-Holland Educational Services Center in Palm Springs.[15][16][17]

The village of Palm Springs is home to three public and one private school:

The public schools include:

The Palm Springs Public Library is located in the Village Government Complex.[18]