From Infogalactic: the planetary knowledge core
Jump to: navigation, search
Not to be confused with palpitations.

Palpation is the process of using one's hands to examine the body, especially while perceiving/diagnosing a disease or illness.[1] Usually performed by a healthcare practitioner, it is also the process of feeling an object in or on the body to determine its size, shape, firmness, or location (such as a veterinarian would check/feel the stomach of a pregnant animal to ensure good health and successful delivery).

Palpation is used by physicians, as well as chiropracters, massage therapists, physical therapists, osteopaths and occupational therapists, to assess the texture of a patient's tissue (such as swelling or muscle tone), to locate the spatial coordinates of particular anatomical landmarks (e.g., to assess range and quality of joint motion), and assess tenderness through tissue deformation (e.g. provoking pain with pressure or stretching). In summary, palpation might be used either to determine painful areas and to qualify pain felt by patients, or to locate three-dimensional coordinates of anatomical landmarks to quantify some aspects of the palpated subject.

Palpation is typically used for thoracic and abdominal examinations, but can also be used to diagnose edema and to measure the pulse. It is used by veterinarians to check animals for pregnancy, and by midwives to determine the position of a fetus.

Combining data from both manual and virtual palpation protocols allows achieving supplementary analysis: - registration protocols aiming at building reference frames for motion representation according reproducible clinical conventions; - to modelize joint kinematics accurately during musculoskeletal analysis; - to align precisely orthopedic tools according to the individual anatomy of a patient; or - to wrap and to scale surface textures to motion data when creating animation characters.

Use of standardized definitions for the above activities allows better result comparison and exchange;[2] this is a key element for patient follow-up, or the elaboration of quality clinical and research databases. Such definitions also allow acceptable repeat ability by individuals with different backgrounds (physiotherapists, medical doctors, nurses, engineers, etc.). If applied strictly, these definitions allow better data exchange and result comparison thanks to standardization of the procedure. Without anatomical landmark standardization, palpation is prone to error and poorly reproducible. 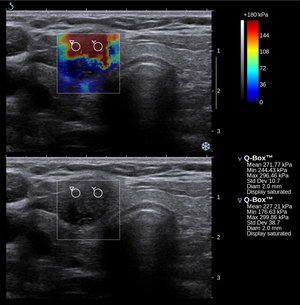 Nowadays, the medical imaging modality of elastography can also be used to determine the stiffness of tissues. Manual palpation suffers from several important limitations: it is limited to tissues accessible to the physician's hand, it is distorted by any intervening tissue, and it is qualitative but not quanitative. Elastography is able to overcome many these challenges and improve on the benefits of palpation.

Elastography is a relatively new technology, and entered the clinic primarily in the last decade. The most prominent techniques use ultrasound or magnetic resonance imaging (MRI) to make both the stiffness map and an anatomical image for comparison.

While not widespread amongst elastography methods, computerized palpation is of interest here because it essentially uses palpation to measure the stiffness, whereas other techniques will obtain data using other methods. Computerized palpation is also called "Tactile Imaging", "Mechanical imaging" or "Stress imaging", is a medical imaging modality that translates the sense of touch into a digital image. The tactile image is a function of P(x,y,z), where P is the pressure on soft tissue surface under applied deformation and x,y,z are coordinates where pressure P was measured. Tactile imaging closely mimics manual palpation, since the probe of the device with a pressure sensor array mounted on its face acts similar to human fingers during clinical examination, slightly deforming soft tissue by the probe and detecting resulting changes in the pressure pattern.

Palpation under general anesthesia is sometimes necessary, such as when there is a need to palpate structures deep in the abdominal or pelvic cavity, since it would otherwise cause considerable patient discomfort and subsequent contraction of the abdominal muscles which would make the examination difficult.[3] It is used, for example, in the staging of cervical cancer.