From Infogalactic: the planetary knowledge core
Jump to: navigation, search
For the psychological condition, see Panic attack.
For other uses, see Panic (disambiguation). 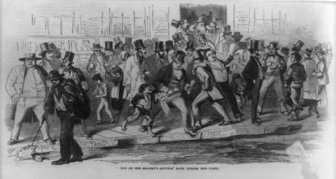 Bank run on the Seamen's Savings' Bank during the Panic of 1857.

Panic is a sudden sensation of fear which is so strong as to dominate or prevent reason and logical thinking, replacing it with overwhelming feelings of anxiety and frantic agitation consistent with an animalistic fight-or-flight reaction. Panic may occur singularly in individuals or manifest suddenly in large groups as mass panic (closely related to herd behavior).

The word derives from antiquity and is a tribute to the ancient God, Pan. One of the many gods in the mythology of ancient Greece: Pan was the god of shepherds and of woods and pastures. The Greeks believed that he often wandered peacefully through the woods, playing a pipe, but when accidentally awakened from his noontime nap he could give a great shout that would cause flocks to stampede. From this aspect of Pan's nature Greek authors derived the word panikon, “sudden fear,” the ultimate source of the English word: "panic". [1]

Prehistoric humans used mass panic as a technique when hunting animals, especially ruminants. Herds reacting to unusually strong sounds or unfamiliar visual effects were directed towards cliffs, where they eventually jumped to their deaths when cornered. Humans are also vulnerable to panic and it is often considered infectious, in the sense one person's panic may easily spread to other people nearby and soon the entire group acts irrationally, but people also have the ability to prevent and/or control their own and others' panic by disciplined thinking or training (such as disaster drills). Architects and city planners try to accommodate the symptoms of panic, such as herd behavior, during design and planning, often using simulations to determine the best way to lead people to a safe exit and prevent congestion (stampedes). The most effective methods are often non-intuitive. A tall column or columns, placed in front of the door exit at a precisely calculated distance, may speed up the evacuation of a large room, as the obstacle divides the congestion well ahead of the choke point.[2]

An influential theoretical treatment of panic is found in Neil J. Smelser's Theory of Collective Behavior. The science of panic management has found important practical applications in the armed forces and emergency services of the world.

Many highly publicized cases of deadly panic occurred during massive public events. The layout of Mecca was extensively redesigned by Saudi authorities in an attempt to eliminate frequent stampedes, which kill an average of 250 pilgrims every year.[3] Football stadiums have seen deadly crowd rushes and stampedes, such as at Heysel stadium in Belgium in 1985 with more than 600 casualties, including 39 deaths, and at Hillsborough stadium in Sheffield, England, in 1989 when 96 people were killed in a deadly crush.