The first finished version was completed in 1995 with the 1L36 radar, later was designed another.[6] It is a short to medium range ground based air defence system, wheeled, tracked or stationary with two to three operators. Its air defense consists of automatic anti-aircraft guns and surface-to-air missiles with radar or optical target-tracking and radio-command guidance.

Its purpose is the protection of civil and military point and area targets, for motorised or mechanised troops up to regimental size or as defensive asset of higher ranking air defence systems like S-300/S-400. The system has capability for anti-munitions missions. It can hit targets on the waterline/above-water.[7] It can operate in a fully automatic mode.[8] It has the ability to work in a completely passive mode. The probability of hitting a target for 1 rocket is not less than 0.7 with a reaction time of 4–6 seconds.It can fire missiles and gun armament while in motion.[9] For its main radar station, early detection in height may be between 0-60° or 26-82° depending on the mode.[10] The system has claimed significant advantages over other systems, such as Crotale NG (France), Roland-3 (France + USA), Rapier 2000 (UK), SeaRAM (Germany + USA). This is not confirmed by comparative testing, but clearly follows from declared limit of possibilities of systems (2010).[11][12] Since 2013, there is a variant with two radar stations for early detection * standing back to back *.[13] The system has a modular structure which enables a fast and easy replacement of any part.

[14] After receiving target coordinates (from any source) it may defeat the target (using all the radar except the early detection radar) within a range from -5 to +85 (82[15]) degrees (vertical).[16] The interval between missile launches is 1-1.5 seconds (a world record for analogue systems).[17] 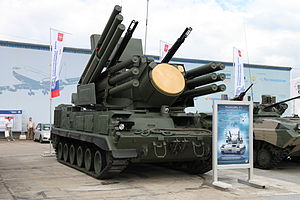 Originally Soviet strategic missile systems had been placed in fixed, hardened sites. Newer systems such as the S-300PS/PM (SA-10/20) on the other hand was much more mobile which reduced its vulnerabilities to attack, However, once the S-300 unit was found by enemy forces it was still very vulnerable to precision weapon systems. One of the roles for the Pantsir-S is to provide air defence to the S-300 missile systems.[18]

It was also decided that a wheeled chassis would be better suited for the Pantsir-S rather than a tracked chassis. The reasoning being that wheeled vehicles are faster, less prone to breakdowns, easier to maintain, and cheaper to produce.[18]

Development as Pantsir-S started in 1990 with a plan to be a successor of Tunguska M1. A prototype was completed in 1994 and displayed at the MAKS-1995. The program soon ran into difficulties which resulted in a halt in funding. However, KBP continued development of the program using its own funds. This resulted in a complete re-design of both the turret and radar systems and removal of any older Tunguska equipment.[18]

The system has two new radars with increased range, capable of tracking more air targets but also land targets and has an integrated IFF system. Within the cabin two new LCD multi-function displays have replaced the multiple CRT display and a new central computer system greatly decreased the reaction time, single operator operation can be achieved when needed. Due to the new technologies adopted, the overall volume of the weapon station is reduced by a third while the overall weight is reduced by half. The system also has enhanced missiles (from type 57E6 to type 57E6-E probably interchangeable) and guns (from type 2A72 to type 2A38M).

Live firing tests took place in June 2006 at the Kapustin Yar firing range, Astrakhan Region, Russia. Final test series prior to delivery in May 2007 at Kapustin Yar included a forced march of 250 km (160 mi) to an unprepared launch position simulating the accomplishing of a typical air-defence mission.

The Pantsir-S1 air-defence missile-gun system was adopted for service with the Russian Army by an order of the Chairman of the Government of the Russian Federation Dmitry Medvedev on 16 November 2012.[19] Modernized Pantsir-S2 entered service in 2015.[20]

Russia is developing a track-based Pantsir system to be more maneuverable with Russian Ground Forces and Airborne Troops.[24]

Pantsir systems will be deployed on the Russian aircraft carrier Admiral Kuznetsov.[citation needed] Russian destroyers and other large ships will be modernized to accommodate the system.[24] Entered series production in 2015.[25] Russia's Defense Ministry has purchased three Naval "Pantsir-M"s.[26] The Pantsir-M differs from the land-based version by having two GSh-6-30K/AO-18KD 30 mm (1.2 in) six-barrel rotary cannons, as found on the Kashtan CIWS which it will replace, in place of the single-barrel autocannons, and an additional radar separate from the one fitted on top of the turret itself. One Pantsir-M combat module can simultaneously engage four targets with four missiles and has an ammunition supply of 32 missiles. The ship-based complex may include several combat modules, with module ammunition supply stored in the storage and reloading system under the deck. The system may also be armed with the 100 km (62 mi)-range Hermes-K missile for engaging surface or coastal targets. The Pantsir-M will be mounted aboard the Karakurt-class corvette and is planned to enter service by the end of 2017.[27][28][29][30]

Modernized system for the Armed Forces and for export. Incorporates new tracking radar, 2 faced radars with enhanced features and range. In service with Russia and Algeria.

After testing Pantsir in the arctic, it was decided to design a new version specifically for the Arctic, to use at temperatures below −50° Celsius called Pantsir-SA.[32][33]

The specific feature of the Pantsir-S1 system is the combination of a multiple-band target acquisition and tracking system in conjunction with a combined missile and gun armament creating a continuous target engagement zone from 5 m (16 ft) height and 200 m (660 ft) range up to 15 km (9.3 mi) height and 20 km (12 mi) range, even without any external support. [34]

Pantsir-S1 carries up to twelve export designated 57E6 or 57E6-E two-stage solid fuel radio-command-guided surface-to-air missiles in sealed ready-to-launch containers. Missiles are arranged into two six-tube groups on the turret. The missile has a bicalibre body in tandem configuration. The first stage is a booster, providing rapid acceleration within the first 2 seconds of flight, after which it is separated from the sustainer-stage. The sustainer is the highly agile part of the missile and contains the high explosive multiple continuous rod and fragmentation warhead, contact and proximity fuses as also radio transponder and laser responder to be localised for guidance. The missile is not fitted with seeker to keep target engagement costs low. Instead high-precision target and missile tracking is provided via the system's multiband sensor system and guidance data is submitted via radio link for up to four missiles in flight. Missiles can be fired at up to four targets, but more often in salvos of two missiles at one target. They are believed to have a hit probability of 70–95% and have a 15-year storage lifetime in its sealed containers. Pantsir-S1 combat vehicles can fire missiles on the move.

Two dual 2A38M 30 mm (1.2 in) autocannon guns are fitted with 700 rounds of a variety of ammunition—HE (High Explosive) fragmentation, fragmentation tracer, and armour-piercing with tracer. Ammunition type can be selected by the crew depending on the nature of the target. Maximum rate of fire is 2,500 rounds per minute per gun. Range is up to 4 km (2.5 mi). The combined gun-missile system has an extremely low altitude engagement capability (targets as low as 0 m AGL can be engaged by this system).

Wheeled combat vehicles have to be jacked up to keep the machine in the horizontal position and be able to fire the gun with full accuracy. The KAMAZ-6560 has four oil hydraulic jacks for this purpose.

The two independent guidance channels—radar and electro-optic—allow two targets to be engaged simultaneously. And four[41] for more recent options (2012). Maximum engagement rate is up to 10-12[9] targets per minute.

In order to increase high operational readiness KBP has designed several vehicles to support the Pantsir-S1 in the field.[42] 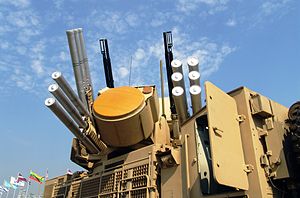 A Pantsir-S1 unit of the Syrian Armed Forces reportedly scored the first combat kill of the type by downing a Turkish Air Force RF-4E carrying out a reconnaissance flight over the Syrian coast near Latakia on 22 June 2012.[43][44]

Various independent experts believe Pantsir-S1 was operated on the rebel side during the War in Donbass. It was filmed in Luhansk and photographed in Makiivka on the rebel-held territories in early 2015.[45][46][47][48] Its used rocket components were also reported to be observed in Ukraine in November 2014.[49]

The system has also been deployed by the Russian armed forces in Syria to guard its deployment during the Russian intervention in the Syrian Civil War.