From Infogalactic: the planetary knowledge core
Jump to: navigation, search
For the World War I medal, see Tank Memorial Badge. 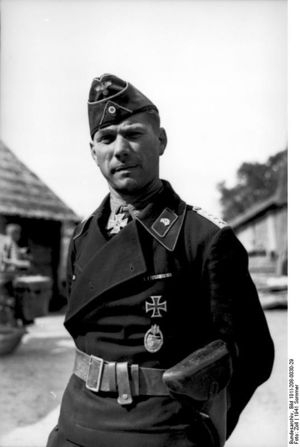 Correct wearing of the Panzer Badge by Major Erich Löwe

The Panzer Badge (German: Panzerkampfabzeichen) was a World War II German military decoration awarded troops in armoured divisions. It was instituted 20 December 1939 (although a version had been introduced during the World War I and a variation during the Spanish Civil War).[1]

The World War I version showed a German A7V tank within a wreath surmounted by a Totenkopf (death's head emblem).

The Panzer Badge was introduced on 20 December, 1939, in order to recognize the achievements of Panzer personnel who took part in armoured assaults. It was designed by the Berlin firm of Wilhelm Ernst Peekhaus, and was instituted by order of Generaloberst Walther von Brauchitsch. On 6 June, 1940, a separate class of the badge, in Bronze, was added in order to recognize the crews of armoured vehicles other than tanks.[1]

The badge was presented in a paper packet with the name of the award printed on the outside. The award document that came with it was the common type that had the particulars of the recipient (rank, name) and the authorizing signature of an officer. The Panzer Badge was worn on the left tunic pocket.[1] The bronze version of the Panzer Badge was authorized for armoured personnel and Panzer grenadier units equipped with armoured vehicles.[2] It was also to be presented to members of armoured reconnaissance groups and rifle battalions of Panzer divisions. The authorization of these badges was usually done at a regimental or divisional level.[3]

The Panzer Badge consists of an oval with a wreath composed of five single oak leaves on one side and four on the other (the tank treads cover one). At the base of the oval is a tie, and at the apex a Wehrmacht eagle, which has folded wings clutches a swastika in its talons. In the center of the badge is a tank that passes from left to right. The left track of the tank goes into the wreath of oak leaves, and the area under the tank is grooved and made to look like grass.[1]

The reverse of the badge has three variations, the badge could either be hollow backed, flat, or semi-dished. The hollowed backed variation showed the imprint of the obverse, while the flat was just solid. The semi-dished version has a slight indent that shows part of the outline of the tank. The badge was attached to the uniform via a pin and catch, which were affixed to the reverse and had a couple of variations. There was the conventional soldering of a small rectangular medal bar, as well as the more rare type in which a circular ball hinge was inserted into the body of the badge.[1]

The tank in the center of the medal is a Panzerkampfwagen IV.[3] The criteria for the award of the Silver Panzer Badge were, to have taken part in 3 armoured assaults on 3 different days, to have been wounded in an assault, to have won a decoration for bravery in an assault.[clarification needed]

As the war continued it became apparent that the single Panzer Badge was no longer adequate to recognize the growing number of veterans with years of experience, and in June 1943 four new classes of the award were introduced for 25, 50, 75 and 100 engagements.[1] These new badges consisted of an award that was similar to the unnumbered Panzer Badge, but with a box showing the Arabic numeral of the class at the base of the wreath. The badge was slightly larger for the 25 and 50 type with the 75 and 100 being larger still.[1] The wreath in the case of the 25 and 50 was silvered, while in the 75 and 100 class it was gilt. The center of the badge (the tank) was made of a separate striking and chemically darkened in the case of the 25 and 50 class, while in the 75 and 100 class the tank was silvered. The reverse has several variations, and could either have a slim or wide pin.[1] The 50 and 100 engagement badges were struck in a lightweight zinc alloy; this was so that the larger pin did not pull inconveniently on the tunic.[3]

A 200 engagements badge was unofficially created but never officially documented.[4] The Tank in the center of the medal is a Panzerkampfwagen III.[3] The 1957 de-Nazified version lost the eagle and the swastika, but was otherwise unchanged.[3]

On November 3, 1944 the head of the Luftwaffe, Reichsmarschall Hermann Göring, instituted the Luftwaffe Panzer Badge (Panzerkampfabzeichen der Luftwaffe), to honour the Panzer troops of the Luftwaffe Field Divisions.[5] Until this time qualified Luftwaffe personnel were awarded the Panzer Badge. The order called for two basic forms of the badge. The first style consisted of silver oak leaf wreath and Luftwaffe flying eagle with a black tank in the center. These badges were awarded to tank commanders, gunners, drivers, radiomen, repair crews and their medical personnel. The second style was identical to the first except the oak leaf wreath was now black. Panzer grenadiers, armoured reconnaissance units, and the medical personnel attached to them were all eligible for this style.[5] The Luftwaffe Panzer Badge consists of an oval wreath composed of eight oak leaves on the left and, due to the tank protruding from the center, only seven oak leaves on the right. A ribbon is positioned on the base of the wreath and a Luftwaffe flying eagle is to be found at the top.[5]

The badge was presented in a paper packet with the name of the award printed on the outside. The award document that was to be awarded with it was the common type featuring the recipients name, rank, unit, and the authorizing signature of an officer. The Luftwaffe Panzer Badge was worn on the left pocket of the tunic and (as with all badges) could be worn on civilian clothes in miniature stickpin form. Both badge styles were awarded for three combat engagements on three different days. As mentioned above the silver wreathed versions were awarded to Panzer crews, repair crews, and the medical personnel attached to them, while the black wreathed version was awarded to Panzer grenadiers, armoured reconnaissance units, and their medical personnel.[5]