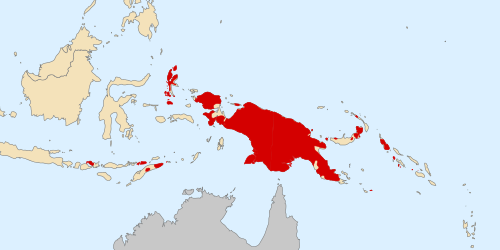 The distribution of the Papuan languages, in red. Tan is Austronesian, and grey the historical range of Australian.

The Papuan languages are those languages of the western Pacific island of New Guinea, and neighbouring islands, that are neither Austronesian nor Australian. The term does not presuppose a genetic relationship. The concept of Papuan peoples as distinct from Melanesians was first suggested and named by Sidney Herbert Ray in 1892.

New Guinea is one of the most linguistically diverse regions in the world. Besides the Austronesian languages, there are some 800 languages divided into perhaps sixty small language families, with unclear relationships to each other or to any other languages, plus a large number of language isolates. The majority of the Papuan languages are spoken on the island of New Guinea, with a number spoken in the Bismarck Archipelago, Bougainville Island, and the Solomon Islands to the east, and in Halmahera, Timor, and the Alor archipelago to the west. The westernmost language, Tambora in Sumbawa, is extinct. One Papuan language, Meriam Mir, is spoken within the national borders of Australia, in the eastern Torres Strait. The only Papuan languages with official recognition are those of East Timor.

Although there has been relatively little study of these languages compared with the Austronesian family, there have been three preliminary attempts at large-scale genealogical classification, by Joseph Greenberg, Stephen Wurm, and Malcolm Ross. The largest family posited for the Papuan region is the Trans–New Guinea phylum, consisting of the majority of Papuan languages and running mainly along the highlands of New Guinea. The various high-level families may represent distinct migrations into New Guinea, presumably from the west.[1] Since perhaps only a quarter of Papuan languages have been studied in detail, linguists' understanding of the relationships between them will continue to be revised.

Statistical analyses designed to pick up signals too faint to be detected by the comparative method, though of disputed validity, suggest five major Papuan stocks (roughly Trans–New Guinea, West, North, East, and South Papuan languages);[2] long-range comparison has also suggested connections between selected languages, but again the methodology is not orthodox in historical linguistics.[3]

The Great Andamanese languages may be related to some western Papuan languages, but are not themselves covered by the term Papuan.[1]

Joseph Greenberg proposed an Indo-Pacific phylum containing the (Northern) Andamanese languages, all Papuan languages, and the Tasmanian languages, but not the Australian Aboriginal languages. Very few linguists accept his grouping. It is distinct from the Trans–New Guinea phylum of the classifications below.

The most widely used classification of Papuan languages is that of Wurm, listed below with the approximate number of languages in each family in parentheses. This was the scheme used by Ethnologue prior to Ross's classification (below). It is based on very preliminary work, much of it typological, and Wurm himself has stated that he doesn't expect it to hold up well to scrutiny. Other linguists, including William A. Foley, have suggested that many of Wurm's phyla are based on areal features and structural similarities, and accept only the lowest levels of his classification, most of which he inherited from prior taxonomies. Foley (1986) divides Papuan languages into over sixty small language families, plus a number of isolates. However, more recently Foley has accepted the broad outline if not the details of Wurm's classification, as he and Ross have substantiated a large portion of Wurm's Trans–New Guinea phylum.

Wurm believed the Papuan languages arrived in several waves of migration with some of the earlier languages (perhaps including the Sepik–Ramu languages) being related to the Australian languages,[4][5] a later migration bringing the West Papuan, Torricelli and the East Papuan languages[4] and a third wave bringing the most recent pre-Austronesian migration, the Trans–New Guinea family.[4]

Papuan families proposed by Wurm (with approximate number of languages)

Two of Wurm's isolates have since been linked as the

and since Wurm's time another isolate and two languages belonging to a new family have been discovered,

Malcolm Ross re-evaluated Wurm's proposal on purely lexical grounds. That is, he looked at shared vocabulary, and especially shared idiosyncrasies analogous to English I and me vs. German ich and mich. The poor state of documentation of Papuan languages restricts this approach largely to pronouns. Nonetheless, Ross believes that he has been able to validate much of Wurm's classification, albeit with revisions to correct for Wurm's partially typological approach. (See Trans–New Guinea languages.) Ethnologue (2009) largely follows Ross.

It has been suggested that the families that appear when comparing pronouns may be due to pronoun borrowing rather than to genealogical relatedness. However, Ross argues that Papuan languages have closed-class pronoun systems, which are resistant to borrowing, and in any case that the massive number of languages with similar pronouns in a family like Trans–New Guinea preclude borrowing as an explanation. Also, he shows that the two cases of alleged pronoun borrowing in New Guinea are simple coincidence, explainable as regular developments from the protolanguages of the families in question: as earlier forms of the languages are reconstructed, their pronouns become less similar, not more. (Ross argues that open-class pronoun systems, where borrowings are common, are found in hierarchical cultures such as those of Southeast Asia and Japan, where pronouns indicate details of relationship and social status rather than simply being grammatical pro-forms as they are in the more egalitarian New Guinea societies.)

Ross has proposed 23 Papuan language families and 9–13 isolates. However, because of his more stringent criteria, he was not able to find enough data to classify all Papuan languages, especially many isolates that have no close relatives to aid in their classification.

Ross also found that the Lower Mamberamo languages (or at least the Warembori language—he had insufficient data on Pauwi) are Austronesian languages that have been heavily transformed by contact with Papuan languages, much as the Takia language has. The Reef Islands – Santa Cruz languages of Wurm's East Papuan phylum were a potential 24th family, but subsequent work has shown them to be highly divergent Austronesian languages as well.

Note that while this classification may be more reliable than past attempts, it is based on a single parameter, pronouns, and therefore must remain tentative. Although pronouns are conservative elements in a language, they are both short and utilise a reduced set of the language's phonemic inventory. Both phenomena greatly increase the possibility of chance resemblances, especially when they are not confirmed by lexical similarities.

Proposed by Ross. Sorted by location:

Languages reassigned to the Austronesian family:

Unclassified due to lack of data:

Joseph Greenberg proposed that the Andamanese languages (or at least the Great Andamanese languages) off the coast of Burma are related to the Papuan or West Papuan languages. Stephen Wurm stated that the lexical similarities between Great Andamanese and the West Papuan and Timor–Alor families "are quite striking and amount to virtual formal identity [...] in a number of instances". However, he considered this not evidence of a connection between (Great) Andamanese and Trans–New Guinea, but of a substratum from an earlier migration to New Guinea from the west.

Greenberg also suggested a connection to the Tasmanian languages. However, the Tasmanian peoples were isolated for perhaps 10,000 years, genocide wiped out their languages before much was recorded of them, and few linguists expect that they will ever be linked to another language family.

William A. Foley (1986)[6] noted lexical similarities between R. M. W. Dixon's 1980 reconstruction of proto-Australian and the languages of the East New Guinea Highlands. He believed that it was naïve to expect to find a single Papuan or Australian language family when New Guinea and Australia had been a single landmass for most of their human history, having been separated by the Torres Strait only 8000 years ago, and that a deep reconstruction would likely include languages from both. However, Dixon later abandoned his proto-Australian proposal,[7] and Foley's ideas need to be re-evaluated in light of recent research. Wurm also suggested the Sepik–Ramu languages have similarities with the Australian languages, but believed this may be due to a substratum effect,[5] but nevertheless believed that the Australian languages represent a linguistic group that existed in New Guinea before the arrival of the Papuan languages (which he believed arrived in at least two different groups).[4]