The German Armed Forces Parachutist Badge (German: Fallschirmspringerabzeichen or Fallschirmschützenabzeichen) is the badge awarded to and worn by qualified parachutists of the Armed Forces (Bundeswehr) of the Federal Republic of Germany. The badge may also be awarded to military service members from allied nations but its authorization and wear is subject to the recipient's national uniform regulations.

In the National Socialist Wehrmacht, the Parachutist Badge was first established by order of Hermann Göring on November 5, 1936. It was originally awarded to soldiers of the Luftwaffe after completion of parachute training and the required number of jumps. The badge depicted a diving eagle with a swastika in its claws surrounded by a silver wreath. It was worn over the left breast pocket. 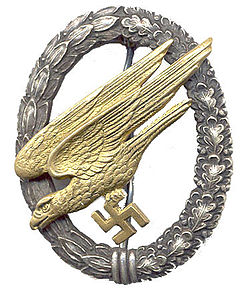 "On January 29th 1936, it was determined that volunteers from I./RGG (1st Batl. Regiment "General Göring" ) would make up the cadre of the first paratrooper training class. Later, in March of that year, the Luftwaffe opened its first jump school at Stendal (Borstel) under Capt. F. W. Immans. The first training course consisted of 24 volunteers, and lasted for two months (May 4th to July 3rd). The first jump licenses (Fallschirmschützenschein) were awarded the day after the course was completed (July 4th, 1936), with Major Bruno Bräuer receiving license number one 1. The first paratrooper badges (Fallschirmschützenabzeichen (Luftwaffe)) would not be awarded until November 5th of that year." — Eric Queen, Author of RED SHINES THE SUN: A Pictorial History of the Fallschirm-Infanterie

An army version (Fallschirmschützen-Abzeichen des Heeres) was later introduced (1 September 1937), with the swastika relocated to the top of the wreath and surmounted by a smaller upright eagle.

On 4 October 1936 the Army ordered the institution of its own parachute company, a Fallschirm-Infanterie-Kompanie. The call went out for volunteers in early March 1937, and on April 1st men who had passed both the psychological and physical exams (only 7 out of each 30 volunteers passed) began arriving at the "Albrecht der Bär" barracks in Stendal. The army did not have a training facility of its own, thus they utilized the already established Luftwaffe facility at Stendal/Borstel (under Olt. Bassange) exclusively. Actual jump training commenced in early June 1937, and only 3 out of each 7 trainees passed the jump course.

The Army Paratroopers Badge (now called Fallschirmschutzenabzeichen des Heeres) was re-instituted on 1 June 1943 with the formation of the 15th (Fallschirmjager-) Kompanie of Brandenburg Regiment 4 (on 1 April 1943). The badge was produced Feinzink by CE Juncker of Berlin with the same dies used to manufacturer the 2nd model badge in aluminum. Dimensions were the same as the 2nd pattern badge in aluminum and the weight was approximately 29.5 grams.

Following the defeat of the Nazis in World War II, the symbols of National Socialism were outlawed in Germany. After the creation of the Bundeswehr, wearing of decorations and badges earned during war-time was permitted, but only after proper "Denazification". The German Parachutist Badge was eventually changed to its current design in 1956, depicting a parachute falling in the sky surrounded by a ring of oak leaves on wings. This badge is worn over the right breast pocket.

In the Bundeswehr the badge has three levels: