The Param Vir Chakra (PVC) is India's highest military decoration awarded for the highest degree of valour or self-sacrifice in the presence of the enemy. The medal has been awarded 21 times, 14 of which were posthumous awards.

Literally meaning 'Wheel (or Cross) of the Ultimate Brave,[3] it is equivalent to the Medal of Honor in the United States and the Victoria Cross in the United Kingdom.[3] The PVC was established on 26 January 1950 (Republic Day of India), by the President of India, with effect from 15 August 1947 (Independence Day of India). It can be awarded to officers or enlisted personnel from all branches of the Indian military. It is the highest gallantry award of the Government of India after Ashoka Chakra,(amendment in the statute on 26 January 1980 resulted in this order of wearing). It replaced the former British colonial Victoria Cross (VC), (see List of Indian Victoria Cross recipients).

Provision was made for the award of a bar for second (or subsequent) awards of the Param Vir Chakra, with a replica of the Vajra, the weapon of Indra, the god of heaven.[3] To date, there have been no such awards. Award of the decoration carries with it the right to use P.V.C. as a postnominal abbreviation.

The Ashoka Chakra is the peace time equivalent of the Param Vir Chakra, and is awarded for the "most conspicuous bravery or some daring or pre-eminent valour or self-sacrifice" other than in the face of the enemy. The decoration may be awarded either to military or civilian personnel and may be awarded posthumously.

The award also carries a cash allowance for those under the rank of lieutenant (or the appropriate service equivalent) and, in some cases, a cash award. On the death of the recipient, the pension is transferred to the widow until her death or remarriage. The paltry amount of the pension has been a rather controversial issue throughout the life of the decoration. The stipend stood at Rs. 10,000 per month in August 2014.[1] In addition, many states have established individual pension rewards that far exceeds the central government's stipend for the recipients of the decoration.

Flying Officer Nirmal Jit Singh Sekhon, who was awarded the Param Vir Chakra posthumously in 1971 was only Indian Air Force officer to date have been honoured with the Param Vir Chakra.[3][4] Naib Subedar Sanjay Kumar and Subedar Yogendra Singh Yadav are the only active duty PVC recipients in the Indian Army.[5]

The medal was designed by Savitri Khanolkar who was married to an Indian Army officer, Vikram Khanolkar of Sikh Regiment.[6] This was done following a request from the first Indian Adjutant General, Major General Hira Lal Atal, who in turn had been entrusted with the responsibility of coming up with an Indian equivalent of the Victoria Cross by Pandit Jawahar Lal Nehru, the first Prime Minister of the Indian Union. Coincidentally, the first Param Vir Chakra was awarded to her son-in-law Lt Gen Surinder Nath Sharma's (ENC) elder brother, Major Somnath Sharma for his bravery in the Kashmir operations in November 1947. He died while evicting Pakistani infiltrators and raiders from the Srinagar Airport. This was when India and newly formed Pakistan had the first war over the Kashmir issue.

The medal is a circular bronze disc 1.375 inches (3.49 cm) in diameter. The state emblem appears in the center, on a raised circle. Surrounding this, four replicas of Vajra, the all-powerful mythic weapon of Indra, the ancient Vedic King of Gods. The motif symbolizes the sacrifice Rishi Dadhichi, who had donated his bones to the Gods for making Vajra to kill demon Vritra. The Indian General Service Medal 1947 which contained the Bhavani sword was withdrawn later.[7] The decoration is suspended from a straight swiveling suspension bar. It is named on the edge. On the rear, around a plain center, are two legends separated by lotus flowers. The words Param Vir Chakra are written in Hindi and English.[8] 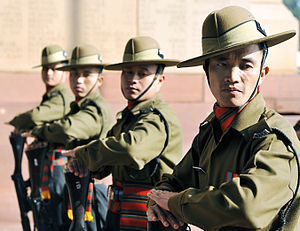 Members of the Indian Army at the India Gate war memorial in Delhi.

The TV series, Param Vir Chakra (1990) directed by noted film director Chetan Anand was on the lives of Param Vir Chakra winners. The first episode of the series featured the first recipient of the award, Major Som Nath Sharma of Kumaon Regiment.[9]

The Bollywood movie LOC Kargil gives an account of all of the PVC recipients from the Kargil War where Captain Manoj Kumar Pandey is played by Ajay Devgan, Subedar Yogendra Singh Yadav is played by Manoj Bajpai, Naib Subedar Sanjay Kumar is played by Sunil Shetty and Captain Vikram Batra is played by Abhishek Bachchan.