Paramushir (Russian: Парамушир, Paramushir; Japanese: 幌筵島 Paramushiru-tō or Horomushiro-tō, Ainu: パラムシㇼ or パラムシㇽ Para-mu-sir), is a volcanic island in the northern portion of Kuril Islands chain in the Sea of Okhotsk in the northwest Pacific Ocean. It is separated from Shumshu by the very narrow Second Kuril Strait in the northeast 2.5 kilometres (1.6 mi), from Antsiferov by the Luzhin Strait (15 km) to the southwest, from Atlasov in the northwest by 20 kilometres (12 mi), and from Onnekotan in the south by the 40 km wide Fourth Kuril Strait. Its northern tip is 39 kilometres (24 mi) from Cape Lopatka at the southern tip of the Kamchatka Peninsula. Its name is derived from the Ainu language, from “broad island” or “populous island”. Severo-Kurilsk, the administrative center of the Severo-Kurilsky district, is the only permanently populated settlement on Paramushir island.

Paramushir is roughly rectangular, and is the second largest of the Kuril Islands with an area of 2,053 square kilometres (793 sq mi).[1] Geologically, Paramushir is a continuous chain of 23 volcanoes. At least five of them are active, and exceed 1,000 metres (3,300 ft):

Paramushir has a sub-arctic climate strongly modulated by the cooling effects of the North Pacific Oyashio Current. The arboreal flora of Paramushir is consequently limited to dense, stunted copses of Siberian dwarf pine and shrubby alder. The alpine tundra which dominates the landscape produces plentiful edible mushrooms and berries, especially lingonberry, Arctic raspberry, whortleberry and crowberry. Red fox, Arctic hare and ermine are notably abundant and hunted by the inhabitants. The island also supports a population of brown bears. The straits between Paramushir and Shumshu island support a notably dense population of sea otters and harbor seals are similarly common.

Several species of charr and Pacific salmon spawn in its rivers, notably in the Tukharka river, which at 20 kilometres (12 mi) is the longest river on the island. 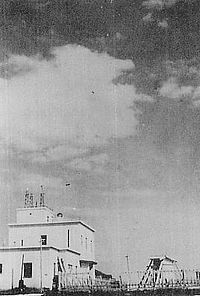 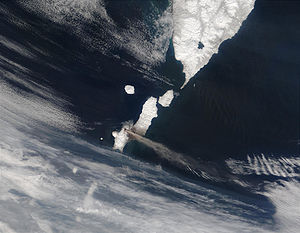 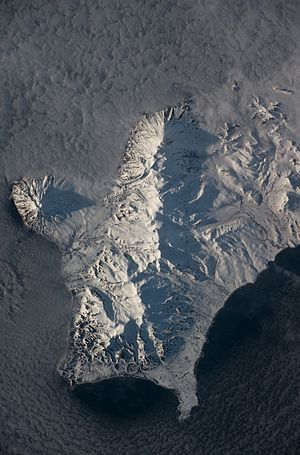 The southern end of Paramushir Island after a snowfall.

Paramushir was inhabited by the Ainu at the time of European contact.[citation needed] The island appears on an official map showing the territories of Matsumae Domain, a feudal domain of Edo period Japan dated 1644. Russian fur traders are known to have visited the island in 1711 and 1713, and Russian Orthodox missionaries established a church in 1747 to convert the local inhabitants. Subsequently claimed by the Empire of Russia, sovereignty over the island was initially confirmed to be under Imperial Russia under the terms of the Treaty of Shimoda in 1855, but was transferred to the Empire of Japan per the Treaty of Saint Petersburg (1875) along with the rest of the Kuril Islands. The Japanese established a settlement, Kashiwabara, on the site of the largest Ainu village, which became the major port on the island, and a center for the commercial fishing industry. The island was administered as part of Shimushu District of Nemuro Subprefecture of Hokkaidō.

During World War II the island was strongly garrisoned by both the Imperial Japanese Army and Imperial Japanese Navy. The headquarters of the IJA 91st Infantry Division, responsible for defense of the northern Kurils, was established at Kashiwabara, and numerous coastal artillery positions and fortified bunkers were constructed in various locations around the island. In addition, the Imperial Japanese Army constructed four airfields: Kashiwabara Airfield in the northeast with Ki-43 Oscars, Kakumabestu Airfield on the southwest coast with a 3,800 feet (1,200 m) runway and Ki-44 Tojos, Kitanodai Airfield on the northeast coast with a 4,000 feet (1,200 m) runway, and Suribachi Airfield, an auxiliary base in the center of the south coast with two runways. The Imperial Japanese Navy had Musashi Airfield on the south-western tip of the island with two 4,000 feet (1,200 m) runways, one 4,300 ft and another 4,200 ft, operating a variety of aircraft as well as a radar site. These bases were subject to sporadic air raids from the US Army Air Forces and US Navy based in the Aleutian Islands from 1943 until the end of the war.

Soviet troops landed on Paramushir on August 18, 1945, during the Invasion of the Kuril Islands, and combat operations continued through August 23, ending with the surrender of the surviving members of the Japanese garrison. The Soviets forcibly deported the remaining Japanese civilian inhabitants and sent the prisoners of war to labor camps. Kashiwabara was renamed Severo-Kurilsk and the island annexed by the Soviet Union in 1946. Japan formally gave up sovereignty over the island under the terms of the San Francisco Peace Treaty of 1951.

In November 1952, Severo-Kurilsk was destroyed by the 1952 Severo-Kurilsk tsunami and was rebuilt in another location. Following the dissolution of the Soviet Union in 1990, the population of the island has decreased (2592 in 2002 census, 5180 in the 1989 census), and villages that once lined the coast are now ghost towns. This is due in part to the crash of the formerly lucrative herring fishery, to the extremely destructive tsunami of 1952, and general economic hardships in the more remote reaches of Russia since the fall of the Soviet Union. The island is now administered as part of the Sakhalin Oblast of the Russian Federation.