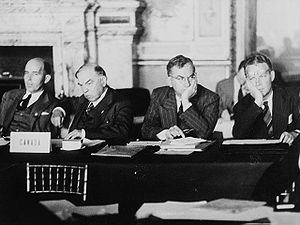 The Paris Peace Treaties were signed on 10 February 1947, as the outcome of the Paris Peace Conference, held from 29 July to 15 October 1946. The victorious wartime Allied powers (principally the United States, Soviet Union, United Kingdom, and France) negotiated the details of peace treaties with Italy, Romania, Hungary, Bulgaria, and Finland following the end of World War II in 1945.

The treaties allowed Italy, Romania, Hungary, Bulgaria, and Finland to resume their responsibilities as sovereign states in international affairs and to qualify for membership in the United Nations.

The settlement elaborated in the peace treaties included payment of war reparations, commitment to minority rights and territorial adjustments including the end of the Italian Colonial Empire in Africa, Greece and Albania, as well as changes to the Italian–Yugoslav, Hungarian–Czechoslovak, Soviet–Romanian, Bulgarian–Romanian, French–Italian and Soviet–Finnish borders.

The political clauses stipulated that the signatory should "take all measures necessary to secure to all persons under (its) jurisdiction, without distinction as to race, sex, language or religion, the enjoyment of human rights and of the fundamental freedoms, including freedom of expression, of press and publication, of religious worship, of political opinion and of public meeting."

No penalties were to be visited on nationals because of wartime partisanship for the Allies. Each government undertook measures to prevent the resurgence of fascist organizations or any others "whether political, military or semi-military, whose purpose it is to deprive the people of their democratic rights".

Italy lost its colonies; Italian East Africa (consisting of Ethiopia, Italian Eritrea and Italian Somaliland) and Italian Libya in North Africa. (Italy continued to govern the former Italian Somaliland as a UN trust territory until 1960.) In the peace treaty, Italy recognized the independence of Albania (in personal union with the Italian monarchy after the Italian invasion of Albania in April 1939). Italy also lost its concession in Tianjin, which was turned over to China. Italy had to cede most of Istria, including the provinces of Fiume, Zara, and most of Gorizia and Pola to Yugoslavia.

The rest of the province of Pola, as well as the province of Trieste, became a new sovereign State, Free Territory of Trieste under a provisional regime of Government [1] under the direct responsibility of the United Nations Security Council.[2]

Italy also had to cede to Yugoslavia all islands in the eastern Adriatic. The Dodecanese Islands were ceded to Greece. The border with France was slightly modified in favor of France, mostly in uninhabited Alpine area, except for the Tende valley and La Brigue. Italian territorial losses included areas that had been part of Italy before World War II, and also areas that had been conquered before the advent of the Fascist regime in 1922 (e.g. Libya, which was conquered in 1912).

Finland was restored to the borders of 1 January 1941 (thus confirming the territorial losses after the Winter War), except for the former province of Petsamo, which was ceded to the Soviet Union. In Finland, the reparations and the dictated border adjustment were perceived as a major injustice and a betrayal by the Western powers, after the sympathy Finland had received from the West during the Soviet-initiated Winter War of 1939–1940. However, this sympathy had been eroded by Finland's cooperation with Nazi Germany during the war years from 1941 to 1944. During this time Finland not only recaptured territory it lost in 1940, but continued its offensive deeper into the Soviet Union, occupying a broad strip of Soviet territory. This prompted the United Kingdom to declare war on Finland in December 1941, further weakening political support in the West for the country. The Soviet Union's accessions of Finnish territory were based on the Moscow Armistice signed in Moscow on 19 September 1944 and resulted in an extension of the accessions in the Moscow Peace Treaty that ended the Winter War.

Hungary was restored to its 1937 borders, (both Vienna Awards were declared null and void, canceling Hungary's gains from Czechoslovakia and Romania) with the exception of three villages south of Bratislava, which were transferred to Czechoslovakia.

Romania was restored to the borders of 1 January 1941, with the exception of the border with Hungary, which reverted to its prewar position. This confirmed the 1940 loss of Bessarabia and Northern Bukovina to the Soviet Union and the Treaty of Craiova, which returned Southern Dobruja to Bulgaria.

Bulgaria was restored to the borders of 1 January 1941, returning Vardar Macedonia to Yugoslavia and Eastern Macedonia and Western Thrace to Greece, but keeping Southern Dobruja per the Treaty of Craiova, leaving Bulgaria as the only former Axis power to keep territory that was gained during the Second World War.

The war reparation problem proved to be one of the most difficult arising from post-war conditions. The Soviet Union, the country most heavily ravaged by the war, felt entitled to the maximum amounts possible, with the exception of Bulgaria, which was perceived as being the most sympathetic of the former enemy states. (Bulgaria was part of the Axis but did not declare war on the Soviet Union). In the cases of Romania and Hungary, the reparation terms as set forth in their armistices were relatively high and were not revised.

The dissolution of the Soviet Union did not lead to any formal revision of the Paris Peace Treaties.