From 1910 to 1994, members of Parliament were elected chiefly by the South African white minority. The first elections with universal suffrage were held in 1994.

Both chambers hold their meetings in the Houses of Parliament, Cape Town that were built 1875–1884.

Main article: Parliament of the Cape of Good Hope

The predecessor of the Parliament of South Africa, before the 1910 Union of South Africa, was the bicameral Parliament of the Cape of Good Hope. This was composed of the House of Assembly (the lower house) and the Legislative Council (the upper house). It dated back to the beginnings of Cape independence in 1853 and was elected according to the multi-racial Cape Qualified Franchise system, whereby suffrage qualifications were applied equally to all males, regardless of race.

The buildings of the Cape Parliament went on to house the Parliament of South Africa, after union.[4][5]

When the Union of South Africa was established in 1910,[6] the Parliament was bicameral and consisted of the King or the Queen, the Senate, and the House of Assembly (known in Afrikaans as the Volksraad).

The composition of Parliament was changed by constitutional amendments from time to time:

In a referendum held in 1960, a small majority of the white voters approved the conversion of the country from a Realm or Dominion of the British Commonwealth to a republic. 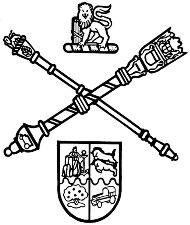 The Republic of South Africa was established in 1961. The only change made to the composition of the Parliament was the substitution of the State President for the Queen.[12] A few significant changes were made later:

A new Constitution, introduced in 1984, re-enfranchised the Coloured population (women as well as men) and enfranchised the Indian population. It retained the existing House of Assembly for whites and established a House of Representatives to represent the Coloureds, and a House of Delegates for the Indians, making Parliament a tricameral legislature. Blacks continued to be excluded.

The black majority were still disfranchised, and the new system lacked legitimacy even among the Coloureds and Asians, many of whom boycotted elections. In a referendum held in 1992, 68.73% of (only white) voters approved the reform process that effectively ended Apartheid. In late 1993, one of the last pieces of legislation passed by the tricameral Parliament was the Interim Constitution, which took effect on 27 April 1994, the same day as the first non-racial elections.

A new interim constitution, introduced in 1994 after four years of negotiation, finally introduced all-race democracy and enfranchised men and women of all races on equal terms, the minimum age remaining 18 years. Parliament was reconstituted to consist of a Senate and a National Assembly.

The parliamentary system uses proportional representation, with voters voting for political parties rather than for candidates. Proportional representation allows for smaller parties to have a chance of acquiring seats in parliament, although these parties often combine in order to have a stronger voice within the political system, especially against the ANC. The Independent Electoral Commission is charged with keeping elections fair, regular, and equal. Parties submit closed lists of candidates to the IEC, and the IEC fills the seats allotted to individual parties using the candidate lists after election results come in. The electoral system has seen little corruption since 1994.

Higher Education Minister Naledi Pandor has noted that during her term (starting 1994) a decline in political respectability had occurred in parliament, due to its members not engaging with one another in a courteous manner. She remarked that she felt undignified to be an observer of the crude behaviour, which also inhibited the conduct of successful politics.[15]

On 2 January 2022, large parts of the Old Assembly Building and National Assembly building were damaged in a fire.[16] A man was arrested and subsequently charged with arson.[17][18]

African National Congress: The ANC was founded in 1912, but were banned by State President Charles Robberts Swart in 1960, remaining so until the ban was lifted thirty years later by President F. W. De Klerk. The ANC became the leading political party in South Africa after the first multi-racial election in 1994. The party's main platform rests on working towards racial equality and eradicating the socio-economic classes which are often based on race. The ANC has been considered a party for native South Africans, especially before 2009 when party leader Jacob Zuma faced multiple accusations regarding corruption, particularly using public funds for his own purposes.[19] The economic difficulties in South Africa, as well as police brutality have both been blamed on the ANC. Currently, the ANC holds 230 seats in parliament. Support for the ANC went down between the 2014 and the 2019 general elections, with violent protests erupting all over the country in response to the allegations of corruption within the ANC and the non-delivery of municipal services.[citation needed]

Democratic Alliance: The DA was formed when the New National Party, the successor to the apartheid-era National Party, merged with the Democratic Party and the Federal Alliance in 2000 to form an alliance. The DA is an opposition party and has been traditionally supported by South Africa's minority communities (White, Coloured and Indian). In more recent years, the party has attempted to win votes from Black South Africans and as a result, Black support for the DA has risen over the past several years, going from 1% to 6%.[20] The DA is a liberal party that favours free-market policies. The DA was allotted 89 seats in parliament after the 2014 general election, but the party's seat total decreased to 84 seats following the 2019 general election.[citation needed]

Inkatha Freedom Party: The IFP, which was formed in 1990 was the successor to the former government in the now-defunct Kwazulu Bantustan, traditionally draws its support from the Zulu people. It has however made inroads into the minority electorate of Whites and Indians. The IFP was the third-largest party until it was unseated by the EFF and is one of the few parties to have consecutive representation in parliament since democracy in 1994. The IFP apart from the ANC was part of the National Government for 10 years. The IFP champions the rights of traditional leaders and advocates for policies which favour free markets. The party is opposed to socialism and communist policies.[citation needed]

Because the ANC has such a large majority in parliament, smaller parties are constantly forming alliances and coalitions in order to act as a stronger opposition to the ANC-run legislative and executive branches. 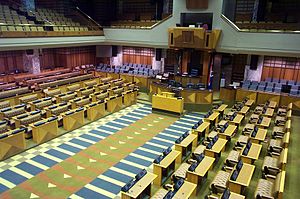 Parliament sits at the Houses of Parliament, Cape Town, even though the seat of government is in Pretoria. This dates back to the foundation of the Union, when there was disagreement among the four provinces as to which city would be the national capital. As a compromise, Cape Town was designated the legislative capital, Bloemfontein the judicial capital, and Pretoria the administrative capital. The African National Congress (ANC) government has proposed moving Parliament to Pretoria, arguing that the present arrangement is cumbersome as ministers, civil servants and diplomats must move back and forth when Parliament is in session.

However, many Capetonians have spoken out against such a move, accusing the ANC of trying to centralise power. Under the Constitution, there is provision for Parliament to sit elsewhere than Cape Town on grounds of public interest, security or convenience and Parliament is permitted to provide in its rules and orders for sittings outside Cape Town. Rule 24 of the National Assembly Rules accordingly allows the Speaker to direct that the House will sit at 'a place other than the Houses of Parliament in Cape Town' after consulting the Leader of the House and the Chief Whip of each party represented in the House. Rule 23 of the rules of the National Council of Provinces allows the council to pass a resolution providing for it to sit elsewhere.

In January 2022, a fire broke out at the Houses of Pariament building in Cape Town causing severe damage to the session rooms of both the National Council of Provinces and the National Assembly.

Parliaments of the Union

Parliaments of the Republic

Media related to Parliament of South Africa at Wikimedia Commons