Parliament of the Bahamas

The Parliament of The Bahamas is the bicameral national parliament of Commonwealth of The Bahamas. The parliament is formally made up by the Queen (represented by the Governor-General), an appointed Senate, and an elected House of Assembly. It currently sits at Nassau, the national capital.

The structure, functions, and procedures of the parliament are based on the Westminster system.

Originally inhabited by the Lucayans, a branch of the Arawakan-speaking Taino people, the Bahamas were the site of Columbus' first landfall in the New World in 1492. Although the Spanish never colonized the Bahamas, they shipped the native Lucayans to slavery in Hispaniola. The islands were mostly deserted from 1513 until 1648, when English colonists from Bermuda settled on the island of Eleuthera.

In 1670 King Charles II granted the islands to the Lords Proprietors of the Carolinas, who rented the islands from the king with rights of trading, tax, appointing governors, and administering the country.[1] The Bahamas became a British crown colony in 1718, when the British clamped down on piracy.

A General Assembly was established in 1729; the first elections took place in September, and on 29 September 1729 twenty-four members representing the islands of New Providence, Eleuthera, and Harbour Island gathered together at the house of Samuel Lawford to form the Assembly.

Bahamians achieved self-government in 1964 and full independence within the Commonwealth of Nations on July 10, 1973, retaining Queen Elizabeth II as monarch. The Parliament as presently constituted was established by Chapter 5 of the Constitution of The Bahamas, which came into effect upon the country's independence from the United Kingdom.

The Senate (upper house) consists of 16 members (known as Senators) appointed by the Governor-General. Nine of these senators are selected on the advice of the Prime Minister, four on the advice of the Leader of the Opposition, and three on the advice of the Prime Minister after consultation with the Leader of the Opposition. The Senate is authorised by the Constitution to pass Bills in the same manner as passed by the House or it can make such amendments to the Bill should it consider it necessary. Those amendments will then have to be approved by the House of Assembly. The Senate may even reject a Bill outrightly that had been passed by the House. However, if the House passes the Bill in two successive sessions, and the Senate rejects the Bill each time, the House of Assembly may send the Bill directly to the Governor-General without the Senate having consented to the Bill.

If the House passes a Money Bill and sends that Bill to the Senate for its consent, and if the Senate does not give its consent within a month after receiving the Bill, the money bill is sent to the Governor-General for assent even though the Senate had not consented to it [2] 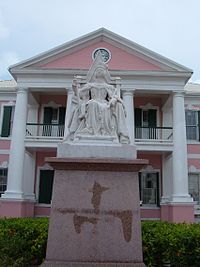 The statue of Queen Victoria, located in Parliament Square, was erected in her honour after her death in 1901

Parliament also maintains oversight of the Government's finances through the Public Accounts Committee. Parliament is also the forum where public policy and matters of national importance are debated.

Most of the laws passed by Parliament are for the modification or amendment of existing laws.

Article 52(2) of the Constitution empowers Parliament to make laws by the passing of a bill (proposed law). Most bills are introduced into Parliament by a Government minister,[citation needed] but in principle any parliamentarian may introduce a bill. A bill must be passed by both the House of Assembly and Senate, and then must be formally assented to by the Governor-General, before it becomes law.

A bill must pass through a series of stages in order to be passed by each[citation needed] chamber, with a vote taken at each stage. The procedure in the House of Assembly is as follows:[4]

Each Bill consists of five main parts: the long title, the short title, the interpretation clause, the main body of the Bill and the objects and reasons. The long title is a description of the nature of the Bill and covers the intent of the Bill. The Short title follows the long title and labels the Bill for identification purposes. The short title sometimes also, contains the commencement clause, which states when the Bill will have legal force. The short title in turn is followed by the interpretation clause, which defines certain words and phrases used in the Bill. The body of the Bill consists of all of the other clauses, which contain the provisions of the Bill, that is, they contain all of the measures that the Bill is enacting. The objects and reasons is the final part of a Bill and it seeks to explain in layman’s terms the purpose of the Bill and the reason why it is necessary.