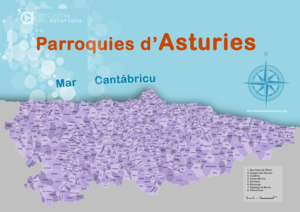 Map with all the Parishes in Asturias.

A parroquia (Spanish: [paˈroki̯a], Galician: [paˈrɔkia], Asturian: [paˈrokja]) is a population entity or parish found in Galicia and Asturias in north-west Spain. The term may have its origins in Roman Catholic Church usage, similar to the British term parish. The concept forms a very settled part of the popular consciousness, but it has never become an official political division. They are equivalent to freguesias in Portugal.[citation needed]

Some say that it constitutes an attempt, as originally created, to more or less match up with tribes predating the Roman presence.[original research?]

In Galicia there are 3781 parroquias, each comprising between three and fifteen or more villages. They developed over time as de facto entities, although the Galician Statute of Autonomy of 1981 recognises them as territorial entities below the concello (municipality) and above villages.[1]

In Asturias there are 857 parishes (parroquias) integrating the 78 concejos or concellos (municipalities) in the region, and they usually coincide with the ecclesiastic divisions.[2]