From Infogalactic: the planetary knowledge core
(Redirected from Party Alliance Our Moldova)
Jump to: navigation, search

The Our Moldova Alliance (Romanian: Partidul Alianţă Moldova Noastră, English: Party Alliance Our Moldova, AMN) was a social-liberal[2][3] political party in Moldova led by Serafim Urechean, former mayor of Chişinău. It merged into the Liberal Democratic Party of Moldova (PLDM) during April 2011.[4][5]

The Our Moldova Alliance was established as a party in 2003 from the merger of:

At the 2005 parliamentary elections, on 6 March 2005, the party was part of the Democratic Moldova Electoral Bloc with the Democratic Party of Moldova (PDM) and Social Liberal Party (PSL), which won 28.4% of the popular vote and 34 out of 101 seats. After the elections the bloc fell apart in three parliamentary groups of the constituent parties, so the Alliance formed a separate group with 23 deputies until the 2009 elections, when they won fewer seats.

At the April 2009 parliamentary elections, the Our Moldova Alliance won 11 seats. With the other opposition parties, it participated in the successful blocking of the election of a presidential candidate from the Party of Communists of the Republic of Moldova (PCRM) during the May–June 2009 presidential election, which led to new elections. At the July 2009 parliamentarty election, the Our Moldova Alliance lost 4 seats, receiving a total of 7 seats. However, other opposition parties gained enough seats for a majority and the PCRM was defeated. In August 2009, the party became a political force within the Alliance For European Integration. The party lost all parliamentary representation in the 2010 parliamentary election. 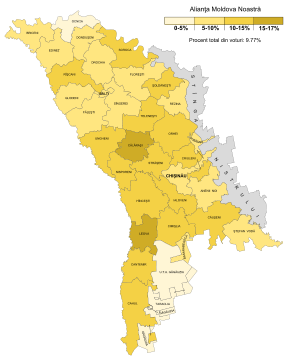