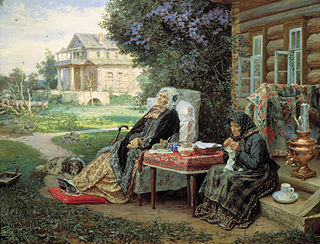 Everything is in the past (Vassily Maximov, 1889).

The past is a term used to indicate the totality of events which occurred before a given point in time. The past is contrasted with and defined by the present and the future. The concept of the past is derived from the linear fashion in which human observers experience time, and is accessed through memory and recollection. In addition, human beings have recorded the past since the advent of written language.

The templates listed here are not interchangeable. For example, using {{col-float}} with {{col-end}} instead of {{col-float-end}} would leave a HTML "div" (division) open, potentially harming any subsequent formatting.