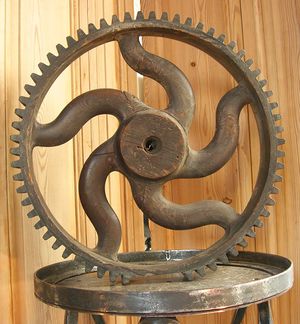 Wooden pattern for a cast-iron gear with curved spokes 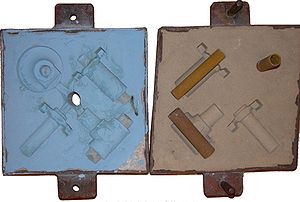 In casting, a pattern is a replica of the object to be cast, used to prepare the cavity into which molten material will be poured during the casting process.[1][2]

Patterns used in sand casting may be made of wood, metal, plastics or other materials. Patterns are made to exacting standards of construction, so that they can last for a reasonable length of time, according to the quality grade of the pattern being built, and so that they will repeatably provide a dimensionally acceptable casting.[3]

The making of patterns, called patternmaking (sometimes styled pattern-making or pattern making), is a skilled trade that is related to the trades of tool and die making and moldmaking, but also often incorporates elements of fine woodworking. Patternmakers (sometimes styled pattern-makers or pattern makers) learn their skills through apprenticeships and trade schools over many years of experience. Although an engineer may help to design the pattern, it is usually a patternmaker who executes the design[4]

Typically, materials used for pattern making are wood, metal or plastics. Wax and Plaster of Paris are also used, but only for specialized applications. Mahogany is the most commonly used material for patterns, primarily because it is soft, light, and easy to work, but also once properly cured it is about as stable as any wood available, not subject to warping or curling. Once the pattern is built the foundry does not want it changing shape. The downside is that it wears out fast, and is prone to moisture attack. Metal patterns are more long lasting, and do not succumb to moisture, but they are heavier and difficult to repair once damaged.[5]

Wax patterns are used in a casting process called investment casting. A combination of paraffin wax, bees wax and carnauba wax is used for this purpose.[5]

Plaster of paris is usually used in making master dies and molds, as it gains hardness quickly, with a lot of flexibility when in the setting stage.[5]

The patternmaker or foundry engineer decides where the sprues, gating systems, and risers are placed with respect to the pattern. Where a hole is desired in a casting, a core may be used which defines a volume or location in a casting where metal will not flow into. Sometimes chills may be placed on a pattern surface prior to molding, which are then formed into the sand mould. Chills are heat sinks which enable localized rapid cooling. The rapid cooling may be desired to refine the grain structure or determine the freezing sequence of the molten metal which is poured into the mould. Because they are at a much cooler temperature, and often a different metal than what is being poured, they do not attach to the casting when the casting cools. The chills can then be reclaimed and reused.

The design of the feeding and gating system is usually referred to as methoding or methods design. It can be carried out manually, or interactively using general-purpose CAD software, or semi-automatically using special-purpose software (such as AutoCAST).

Single piece pattern :-it is simply the replica of the desired casting.it is slightly larger than the casting . these pattern may be of wood, metal or plastic ( hard plastic). Match plate pattern, Cope & drag pattern, lagged-up pattern, Built up pattern, Multi-piece pattern, Gated pattern, Sweep pattern, Skeleton pattern, Shell pattern and loose piece pattern, Left and right hand pattern, Follow board pattern, Segmental patterns are some of the types of patterns.

To compensate for any dimensional and structural changes which will happen during the casting or patterning process, allowances are usually made in the pattern.[6]

The pattern needs to incorporate suitable allowances for shrinkage; these are called contraction allowances, and their exact values depend on the alloy being cast and the exact sand casting method being used. Some alloys will have overall linear shrinkage of up to 2.5%, whereas other alloys may actually experience no shrinkage or a slight "positive" shrinkage or increase in size in the casting process (notably type metal and certain cast irons). The shrinkage amount is also dependent on the sand casting process employed, for example clay-bonded sand, chemical bonded sands, or other bonding materials used within the sand. This was traditionally accounted for using a shrink rule, which is an oversized rule.

Generally during shrinkage, all dimensions are going to be altered uniformly, unless there is a restriction.[7]

When the pattern is to be removed from the sand mold, there is a possibility that any leading edges may break off, or get damaged in the process. To avoid this, a taper is provided on the pattern, so as to facilitate easy removal of the pattern from the mold, and hence reduce damage to edges. The taper angle provided is called the Draft angle. The value of the draft angle depends upon the complexity of the pattern, the type of molding (hand molding or machine molding), height of the surface, etc. Draft provided on the casting 1 to 3 degrees on external surface ( 5 to 8 internal castings)[7]

Usually during removal of the pattern from the mold cavity, the pattern is rapped all around the faces, in order to facilitate easy removal. In this process, the final cavity is enlarged. To compensate for this, the pattern dimensions need to be reduced. There are no standard values for this allowance, as it is heavily dependent on the personnel. This allowance is a negative allowance, and a common way of going around this allowance is to increase the draft allowance.Shaking of pattern causes an enlargement of mould cavity and results in a bigger casting.[7]

During cooling of the mold, stresses developed in the solid metal may induce distortions in the cast. This is more evident when the mold is thinner in width as compared to its length. This can be eliminated by initially distorting the pattern in the opposite direction.[6]

Patterns continue to be needed for sand casting of metals. For the production of gray iron, ductile iron and steel castings, sand casting remains the most widely used process. For aluminum castings, sand casting represents about 12% of the total tonnage by weight (surpassed only by die casting at 57%, and semi-permanent and permanent mold at 19%; based on 2006 shipments). The exact process and pattern equipment is always determined by the order quantities and the casting design. Sand casting can produce as little as one part, or as many as a million copies.

Although additive manufacturing modalities such as SLS or SLM have potential to replace casting for some production situations, casting is still far from being completely displaced. Wherever it provides suitable material properties at competitive unit cost, it will remain in demand.