A pattern coin is a coin which has not been approved for release, produced for the purpose of evaluating a proposed coin design.[1] They are often off-metal strike, to proof standard or piedforts. They are collected or studied by many coin collectors because of their sometimes highly elaborate designs.

The first English coin that can be identified with certainty is a groat, originally worth fourpence. This piece, an example of which was illustrated and sold in the Dodsley Cuff sale of the mid-19th century, had crowns in place of the usual three pellets in each quarter of the reverse.[citation needed]

Patterns are particularly identifiable and exist in larger numbers from the reign of Elizabeth I onwards. The experimental base metal issues of all coinage prior to the mid-18th century have been well preserved.[citation needed]

Boulton's mint in Soho produced prodigious quantities of patterns, which were supplemented by Taylor some fifty or so years later from the same dies.[citation needed]

After the Declaration of Independence was signed on July 4, 1776, discussion arose over what sort of currency should be adopted in the United States. During the next 16 years, a variety of different coin designs from over the world were common. In this period, a relatively large amount of different pattern coins were created, proposed for use in the newly found states. However, none of these designs were used by the general public.[citation needed]

In 1792 the United States Mint opened in Philadelphia. In that year several more patterns were created, including the half dime, then known as a "half disme". It is believed that ca. 1,500 pieces were struck as patterns, and that these patterns themselves entered circulation during the next decade.[citation needed]

Over the next 40 years, more patterns were created but there is little information currently known about these pieces. Technically, these coins were not patterns but rather off-metal strikes, with the coins struck in a different metal than those destined for general use in circulation. An example is an 1807 Half Eagle, or five dollar gold piece struck in copper. 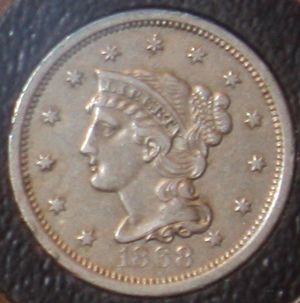 Starting in 1836, more patterns were created by the United States Mint in Philadelphia. These consisted of several types of patterns, which can be grouped into the following categories:

One famous example of a pattern coin for proposed coinage is the Half-union, a gold pattern coin with a face value of 50 U.S. Dollars that was minted in 1877 and weighed 2.5 ounces. The U.S. Mint deemed the idea of a 2.5 ounce gold coin infeasable, however, and only two were ever minted.

Transitional pieces are patterns dated before coins with the new design officially went into circulation. These were often produced during final stage of the pattern process, used to present the newly adopted design to the public. One famous example is the 1856 Flying Eagle cent, although that coin has been commonly and incorrectly believed to be regular issue due to its high mintage for collectors.

Fantasy pieces include many struck in the 1860s and 1870s as patterns and sold to numismatists for the sole purpose of raising cash for the mint. This practice ended in the 1880s, when the U.S. Mint enforced regulations to prevent the sale of pattern coins.[2]

From time to time the U.S. Mint experiments with new coinage, such as when silver was removed. At that time the practice of using dies with Martha Washington for trial strikings began, since they would not be confused with "real" circulating money.[3] Because they do not resemble money, no restrictions exist on the sale of Martha Washington pieces. Mint-produced modern patterns are very rare, with only a few pieces existing in private collections. The United States mint has placed restrictions on the sale of modern patterns that do resemble coins, such as the 1974 aluminum cent.[citation needed] At this time, such coins are bought and sold only on the black market, as it is considered illegal to remove them from the Mint.

One of the most expansive collections of American pattern coins is the Harry W. Bass, Jr. collection, housed at the ANA Money Museum in Colorado Springs, Colorado.[4]

Pattern coins of France and of French-speaking countries such as Monaco are described by the French term essai. The essai coins of New Hebrides are of interest to collectors of British Commonwealth coinage, as New Hebrides gained independence in 1980 as the Republic of Vanuatu.

The word essai is found inscribed on the pattern coins of Namibia along with the German word Probe.[citation needed]