Paul Ben-Haim (or Paul Ben-Chaim, Hebrew: פאול בן חיים‎) (5 July 1897 – 14 January 1984) was an Israeli composer. Born Paul Frankenburger in Munich, Germany, he studied composition with Friedrich Klose and he was assistant conductor to Bruno Walter and Hans Knappertsbusch from 1920 to 1924. He served as conductor at Augsburg from 1924 to 1931, and afterwards devoted himself to teaching and composition, including teaching at the Shulamit Conservatory. 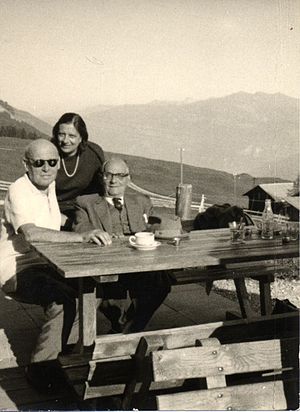 Paul Ben-Haim and his wife, with the writer Max Brod

Ben-Haim emigrated to the then British Mandate of Palestine in 1933 and lived in Tel Aviv, near Zina Dizengoff Square.[1] He Hebraized his name, becoming an Israeli citizen upon that nation's independence in 1948. He composed chamber music, works for choir, orchestra and solo instruments, and songs. He championed a specifically Jewish national music: his own compositions are in a late Romantic vein with Middle Eastern overtones, somewhat similar to Ernest Bloch.