Paul Erdős (Hungarian: Erdős Pál [ˈɛrdøːʃ ˈpaːl]; 26 March 1913 – 20 September 1996) was a Hungarian mathematician. He was one of the most prolific mathematicians of the 20th century.[2] He was known both for his social practice of mathematics (he engaged more than 500 collaborators) and for his eccentric lifestyle (Time magazine called him The Oddball's Oddball).[3] Erdős pursued problems in combinatorics, graph theory, number theory, classical analysis, approximation theory, set theory, and probability theory.[4]

Paul Erdős was born in Budapest, Austria-Hungary, on March 26, 1913.[5] He was the only surviving child of Anna and Lajos Erdős (formerly Engländer).[6] His two sisters, aged 3 and 5, died a few days before he was born.[7] His parents were both Jewish mathematics teachers from a vibrant intellectual community. His fascination with mathematics developed early—by the age of four, given a person’s age, he could calculate, in his head, how many seconds they had lived.[8]

Both of Erdős's parents were high school mathematics teachers, and Erdős received much of his early education from them. Erdős always remembered his parents with great affection. At 16, his father introduced him to two of his lifetime favorite subjects—infinite series and set theory. During high school, Erdős became an ardent solver of the problems proposed each month in KöMaL, the Mathematical and Physical Monthly for Secondary Schools.[9]

Erdős later published several articles in it about problems in elementary plane geometry.

In 1934, at the age of 21, he was awarded a doctorate in mathematics from the University of Budapest. Erdős's thesis advisor was Leopold Fejér (or Fejér Lipót), who was also the thesis advisor for John von Neumann, George Pólya, and Paul (Pál) Turán.

Much of his family, including two of his aunts, two of his uncles, and his father died in Budapest during the Holocaust. His mother survived in hiding. He was living in America and working at the Princeton Institute for Advanced Study at the time.[10]

On September 20, 1996, at the age of 83, he had a heart attack and died while attending a conference in Warsaw. He never married and had no children. He is buried next to his mother and father in grave 17A-6-29 at Kozma Utcai Temető in Budapest.[11] For his epitaph, he suggested "I've finally stopped getting dumber." (Hungarian: "Végre nem butulok tovább").[12]

His life was documented in the film N Is a Number: A Portrait of Paul Erdős, made while he was still alive, and posthumously in the book The Man Who Loved Only Numbers (1998).

Erdős's name contains the Hungarian letter "ő" ("o" with double acute accent), but is often incorrectly written as Erdos or Erdös either "by mistake or out of typographical necessity".[13]

Another roof, another proof.

Possessions meant little to Erdős; most of his belongings would fit in a suitcase, as dictated by his itinerant lifestyle. Awards and other earnings were generally donated to people in need and various worthy causes. He spent most of his life as a vagabond, traveling between scientific conferences, universities and the homes of colleagues all over the world. He earned enough in stipends from universities as a guest lecturer, and from various mathematical awards to fund his travels and basic needs; money left over he used to fund cash prizes for proofs of "Erdős problems" (see below). He would typically show up at a colleague's doorstep and announce "my brain is open", staying long enough to collaborate on a few papers before moving on a few days later. In many cases, he would ask the current collaborator about whom to visit next.

His colleague Alfréd Rényi said, "a mathematician is a machine for turning coffee into theorems",[15] and Erdős drank copious quantities. (This quotation is often attributed incorrectly to Erdős,[16] but Erdős himself ascribed it to Rényi.[17]) After 1971 he also took amphetamines, despite the concern of his friends, one of whom (Ron Graham) bet him $500 that he could not stop taking the drug for a month.[18] Erdős won the bet, but complained that during his abstinence, mathematics had been set back by a month: "Before, when I looked at a piece of blank paper my mind was filled with ideas. Now all I see is a blank piece of paper." After he won the bet, he promptly resumed his amphetamine use.

He had his own idiosyncratic vocabulary: Although an agnostic atheist,[19][20] he spoke of "The Book", a visualization of a book in which God had written down the best and most elegant proofs for mathematical theorems.[21] Lecturing in 1985 he said, "You don't have to believe in God, but you should believe in The Book." He himself doubted the existence of God, whom he called the "Supreme Fascist" (SF).[22][23] He accused SF of hiding his socks and Hungarian passports, and of keeping the most elegant mathematical proofs to himself. When he saw a particularly beautiful mathematical proof he would exclaim, "This one's from The Book!". This later inspired a book titled Proofs from the Book.

Other idiosyncratic elements of Erdős's vocabulary include:[24]

He gave nicknames to many countries, examples being: the U.S. was "samland" (after Uncle Sam), the Soviet Union was "joedom" (after Joseph Stalin), and Israel was "isreal".

In 1934, he moved to Manchester, England, to be a guest lecturer. In 1938, he accepted his first American position as a scholarship holder at Princeton University. At this time, he began to develop the habit of traveling from campus to campus. He would not stay long in one place and traveled back and forth among mathematical institutions until his death.

In 1952, the United States Citizenship and Immigration Services denied Erdős, a Hungarian citizen, a re-entry visa into the United States, for reasons that have never been fully explained.[25] Teaching at the University of Notre Dame at the time, Erdős could have chosen to remain in the country. Instead, he packed up and left, albeit requesting reconsideration from the U.S. Immigration Services at periodic intervals. 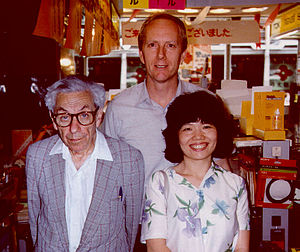 The U.S. Immigration Services later on granted a visa in 1963 to Erdős and he resumed including American universities in his teaching and travels. Ten years later, the 60-year-old Erdős left voluntarily from Hungary in 1973.[26]

During the last decades of his life, Erdős received at least fifteen honorary doctorates. He became a member of the scientific academies of eight countries, including the U.S. National Academy of Sciences and the UK Royal Society. Shortly before his death, he renounced his honorary degree from the University of Waterloo over what he considered to be unfair treatment of colleague Adrian Bondy.[27][28]

Erdős was one of the most prolific publishers of papers in mathematical history, comparable only with Leonhard Euler; Erdős published more papers, mostly in collaboration with other mathematicians, while Euler published more pages, mostly by himself.[29] Erdős wrote around 1,525 mathematical articles in his lifetime,[30] mostly with co-authors. He strongly believed in and practiced mathematics as a social activity,[31] having 511 different collaborators in his lifetime.[32]

In his mathematical style, Erdős was much more of a "problem solver" than a "theory developer". (See "The Two Cultures of Mathematics"[33] by Timothy Gowers for an in-depth discussion of the two styles, and why problem solvers are perhaps less appreciated.) Joel Spencer states that "his place in the 20th-century mathematical pantheon is a matter of some controversy because he resolutely concentrated on particular theorems and conjectures throughout his illustrious career."[34] Erdős never won the highest mathematical prize, the Fields Medal, nor did he coauthor a paper with anyone who did,[35] a pattern that extends to other prizes.[36] He did win the Wolf Prize, where his contribution is described as "for his numerous contributions to number theory, combinatorics, probability, set theory and mathematical analysis, and for personally stimulating mathematicians the world over".[37] In contrast, the works of the three winners after were recognized as "outstanding", "classic", and "profound", and the three before as "fundamental" or "seminal".

Of his contributions, the development of Ramsey theory and the application of the probabilistic method especially stand out. Extremal combinatorics owes to him a whole approach, derived in part from the tradition of analytic number theory. Erdős found a proof for Bertrand's postulate which proved to be far neater than Chebyshev's original one. He also discovered the first elementary proof for the prime number theorem, along with Atle Selberg. However, the circumstances leading up to the proofs, as well as publication disagreements, led to a bitter dispute between Erdős and Selberg.[38][39] Erdős also contributed to fields in which he had little real interest, such as topology, where he is credited as the first person to give an example of a totally disconnected topological space that is not zero-dimensional.[40] 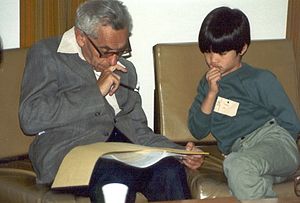 Paul Erdős influenced many young mathematicians. In this 1985 photo taken at the University of Adelaide, Erdős explains a problem to Terence Tao — who was 10 years old at the time. Tao received the Fields Medal in 2006, and was elected a Fellow of the Royal Society in 2007.

Throughout his career, Erdős would offer payments for solutions to unresolved problems.[41] These ranged from $25 for problems that he felt were just out of the reach of the current mathematical thinking (both his and others), to several thousand dollars for problems that were both difficult to attack and mathematically significant. There are thought to be at least a thousand such unpaid payments, though there is no official or comprehensive list. The offers remain active despite Erdős's death; Ronald Graham is the (informal) administrator of solutions. The solvers can get either the original check signed by Erdős before his death (for memento only, cannot be cashed) or a cashable check from Graham.[42]

Perhaps the most mathematically notable of these problems is the Erdős conjecture on arithmetic progressions:

If the sum of the reciprocals of a sequence of integers diverges, then the sequence contains arithmetic progressions of arbitrary length.

If true, it would solve several other open problems in number theory (although one main implication of the conjecture, that the prime numbers contain arbitrarily long arithmetic progressions, has since been proved independently as the Green–Tao theorem). The payment for the solution of the problem is currently worth US$5000.[43]

The most familiar problem with an Erdős prize is likely the Collatz conjecture, also called the 3N + 1 problem. Erdős offered $500 for a solution.

The Erdős number was most likely first defined by Casper Goffman,[50] an analyst whose own Erdős number is 2.[51] Goffman published his observations about Erdős's prolific collaboration in a 1969 article titled "And what is your Erdős number?"[52]

Jerry Grossman has written that it could be argued that Baseball Hall of Famer Hank Aaron can be considered to have an Erdős number of 1 because they both autographed the same baseball when Emory University awarded them honorary degrees on the same day.[53] Erdős numbers have also been proposed for an infant, a horse, and several actors.[54]

Erdős is the subject of at least three books: two biographies (Hoffman's The Man Who Loved Only Numbers and Schechter's My Brain is Open, both published in 1998) and a 2013 children's picture book by Deborah Heiligman (The Boy Who Loved Math; The Improbable Life of Paul Erdős).[57]