Paul Hausser (7 October 1880 – 21 December 1972) was an officer in the German Army, achieving the rank of lieutenant-general in the inter-war Reichswehr. After retirement from the regular Army he became a leading commander in the Waffen-SS. A popular commanding officer, he led Waffen-SS troops both on the Eastern and Western Fronts of World War II. After the war he became a founding member and the first spokesperson of HIAG, an organisation of former Waffen-SS members, which sought to rehabilitate the reputation and legal status of the Waffen-SS.

Hausser was born in Brandenburg an der Havel to a Prussian military family; his father Kurt Hausser was a major in the Imperial German Army. Paul entered the army in 1892 and from then until 1896 was at the cadet school in Köslin, and from 1896 he attended the cadet academy Berlin-Lichterfelde where he successfully graduated in 1899. On March 20, 1899 he was commissioned as a lieutenant and assigned to Infantry-Regiment 155 stationed at Ostrowo in Posen (now Poznań, Poland); on October 1, 1903 he became the adjutant of the regiment’s 2nd battalion and he served in this capacity for five years, until October 1, 1908. Noted for his military gifts, he attended the Prussian Military Academy in Berlin from October 1908 until his graduation on July 21, 1911. From 1912, onwards, including the First World War, Hausser served in a number of General Staff assignments, including the greatly reduced postwar German army (Reichswehr), in which by 1927 he had become a colonel.

He was promoted to Major General on February 1, 1931. He retired from the Reichswehr on January 31, 1932 with the rank of lieutenant-general. Following his retirement, Hausser joined the right wing World War I veterans organization Stahlhelm, becoming the head of its Brandenburg-Berlin chapter in 1933. Soon, Stahlhelm was incorporated into the SA, and with the SA's eclipse, into the SS. In November 1934 he was transferred to the SS-Verfügungstruppe and assigned to SS-Führerschule Braunschweig. In 1935 he became Inspector of SS-Junkerschule and was promoted to Brigadeführer in 1936. 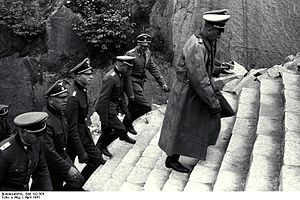 Paul Hausser (far right, in overcoat) walking up the Stairs of Death at Mauthausen-Gusen concentration camp, on tour with SS officers and Heinrich Himmler, June, 1941.

Hausser served in the Polish Campaign of 1939 as an observer with the mixed Wehrmacht/SS Panzer Division Kempf. In October 1939 SS-VT was formed as a motorized infantry division with Hausser in command. He led the division, later renamed 2nd SS Division Das Reich, through the French campaign of 1940 and in the early stages of Operation Barbarossa. For his services in Russia, Hausser was awarded the Knight's Cross of the Iron Cross in 1941 and the Oak Leaves in 1943 (he was to get the Swords for his services in Normandy) and was severely wounded, losing an eye.

After recovering, he commanded the newly formed SS-Panzer Corps (renamed II SS Panzer Corps in June 1943) and against Hitler's explicit orders withdrew his troops from Kharkov to avoid encirclement. He led 1st, 2nd and 3rd SS divisions during the Battle of Kursk.

After Kursk, his Corps was reformed (substituting the 1st, 2nd and 3rd SS Panzer Divisions with the 9th and 10th SS divisions) and sent to Italy, then to France where he commanded them in the early stages of the Normandy Campaign.

After the death of Friedrich Dollmann (commander of the Seventh Army), Hausser was promoted to the command of Seventh Army. During the Falaise encirclement, Hausser remained with his troops until he was wounded (shot through the jaw). Paul Hausser was promoted to Oberst-Gruppenführer und Generaloberst der Waffen-SS in August 1944 and subsequently commanded Army Group G from 28 January to 3 April 1945. On the day he was relieved, Joseph Goebbels wrote, "He has definitely not stood the test." He ended the war on Generalfeldmarschall Albert Kesselring's staff. At the Nuremberg Trials he defended the military role of the Waffen-SS and denied that it was involved in war crimes and atrocities.

After the war, Hausser was active in HIAG, a revisionist organization of former Waffen-SS members. HIAG began in the late 1950 as a loose association of local "support" groups; by October 1951, however, it claimed to embrace 376 local branches across the entire Federal Republic. In December 1951, Hausser became its first spokesperson.[1]

As part of its lobbying efforts, HIAG attempted to "manipulate historical record or simply to ignore it."[2] HIAG rewriting of history included significant multi-prong propaganda efforts, including tendentious periodicals, books and public speeches,[3] along with a publishing house – Munin Verlag – to serve as a platform for its publicity aims. The express aim of Munin Verlag was to publish the 'war narratives' of former Waffen-SS members, in cooperation with HIAG.[4]

Paul Hausser's 1953 book Waffen-SS in Action (Waffen-SS im Einsatz) was the first major work to come from among the HIAG leaders. It had an unmistakable connection to the Nazi origins of the Waffen-SS: the SS runes on the cover art and the SS motto ('my honor is my loyalty') embossed on the cloth cover. A foreword from the former Wehrmacht general Hans Guderian provided a glowing endorsement for the Waffen-SS troops and praised them as "the first realization of the European idea".[5]

Hausser followed up by describing the growth of Waffen-SS into a so-called multinational force where foreign volunteers fought and died heroically as a "militant example of the great European idea".[5]

Hausser's books, along with those by other key HIAG members and former Waffen-SS generals Felix Steiner and Kurt Meyer, have been characterised by historian Charles Sydnor as the "most important works of [Waffen-SS] apologist literature." These works demanded rehabilitation of the military branch of the Nazi Party and presented Waffen-SS members as both victims and misunderstood heroes.[6]

Thanks to HIAG's efforts, the positive image of the Waffen-SS as an organisation indeed took root, and not only in Germany itself. In the era of the Cold War, senior Waffen-SS personnel were "not shy about the fact that they had once organized a NATO-like army, and an elite one at that", notes military historian S. P. MacKenzie (emphasis in the original).[7]

Historian James M. Diehl describes HIAG's claims of the Waffen-SS being the so-called fourth branch of the Wehrmacht as "false", and HIAG's insistence that the force was a precursor to NATO as "even more outrageous".[8] 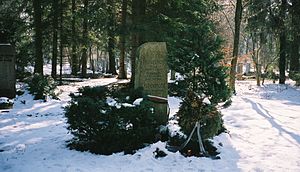 Hausser authored two books offering apologetic account of the Waffen SS and his role in it: