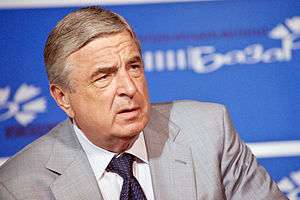 Born in the town of Shakhunya, near the city of Nizhny (Formerly known as Gorky during Soviet times) in the Nizhny Novgorod Region. Shortly after his birth the family moved to the city of Kyzyl in the Tuva Region, which is situated in the far south of Siberia.

From 1993–2000 he was Head of the Presidential Property Management Department of the Russian Federation .

Since 2000 he has been the State Secretary of the Union of Russia and Belarus.

In 2001 he was arrested in New York for money-laundering. Later he was released on bond of five million Swiss francs. In 2002 his case was closed and the bond was returned while further details are not disclosed.[1]