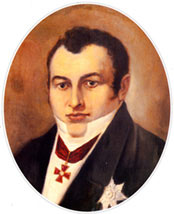 Baron Pavel L'vovitch Schilling, also known as Paul Schilling (5 April 1786, Reval (now, Tallinn), Estonia – St. Petersburg, Russia, 25 July 1837[1]), was a diplomat of Baltic German origin employed in the service of Russia in Germany, and who built a pioneering electrical telegraph. It consisted of a single needle system which used a telegraph code to indicate the characters in a message.

Schilling's first electromagnetic telegraph cable line was set up in his apartment in St Petersburg. In 1832, Schilling demonstrated the long-distance transmission of signals by positioning two telegraphs of his invention—his device was said to be the first electromagnetic telegraph in the world—in two different rooms of his apartment. Schilling was the first to put into practice the idea of a binary system of signal transmissions. Schilling's contributions to electrical telegraphy were named an IEEE Milestone in 2009.[2]

The most important exhibit in the telegraph collection of the A.S. Popov Central Museum of Communications is reputed to be Schilling's telegraph of 1832. A demonstration device was set up in 1835 on an underground line around the Admiralty building. An operational line between Kronstadt and the Peterhof Palace was planned but cancelled after Schilling's death.[3]