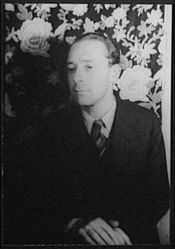 Pavel Tchelitchew (Russian: Па́вел Фёдорович Чели́щев) (21 September 1898, Kaluga,[1] near Moscow – 31 July 1957, Rome) was a Russian-born surrealist painter, set designer and costume designer. Tchelitchew was born to an aristocratic family of landowners and was educated by private tutors.[2] Tchelitchew expressed an early interest in ballet and art.[3] He left Russia in 1920, lived in Berlin from 1921 to 1923, and moved to Paris in 1923. In Paris Tchelitchew became acquainted with Gertrude Stein and, through her, the Sitwell and Gorer families. He and Edith Sitwell had a long-standing close friendship and they corresponded frequently.

His first U.S. show was of his drawings, along with other artists, at the newly opened Museum of Modern Art in 1930. In 1934, he moved from Paris to New York City with his partner, writer Charles Henri Ford. From 1940 to 1947, he provided illustrations for the Surrealist magazine View, edited by Ford and writer and film critic Parker Tyler. His most significant work is the painting Hide and Seek, painted in 1940–42, and currently owned by the Museum of Modern Art in New York City.

He became a United States citizen in 1952 and died in Grottaferrata, Italy in 1957. He is interred in Père Lachaise Cemetery in Paris.

Tchelitchew's early painting was abstract in style, described as Constructivist and Futurist and influenced by his study with Aleksandra Ekster in Kiev. After emigrating to Paris he became associated with the Neo-romanticism movement. He continuously experimented with new styles, eventually incorporating multiple perspectives and elements of surrealism and fantasy into his painting. As a set and costume designer, he collaborated with Sergei Diaghilev and George Balanchine, among others. 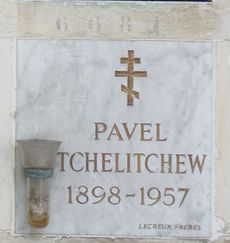