Pavlo Skoropadsky was born into Skoropadsky family of Ukrainian military leaders and statesmen, that distinguished themselves since the 17th century when Fedir Skoropadsky participated in the Battle of Zhovti Vody.

The father of Pavlo Petro Ivanovych Skoropadsky (1834–1885) was a Cavalry Guard Colonel and a veteran of the Caucasian War (Subjugation of Circassia, 1863). Afterwards he served as a speaker (marshal) for the Starodub County Council (zemstvo) (1869–1885) until his death.

Pavlo's aunt Countess Yelyzaveta Myloradovych (née Skoropadska) (1832–1890) was a Ukrainian public activist. She was one of the main sponsors for foundation first Ukrainian scientific institution Shevchenko Scientific Society in Lviv. Her husband was Count Lev Myloradovych whose mother was from the Kochubey family.

Pavlo grew up at his father's estate in Trostianets, Pryluky County, Poltava Governorate. He attended a gymnasium in Starodub and later graduated from the Page Corps cadet school in Saint Petersburg.

In 1893 Skoropadsky graduated from the Page Corps and was assigned as a cornet (meaning the 2LT in cavalry) to the Chevalier Guard regiment where he was put in charge of a squadron. After two years he was assigned a duty of the Regimental adjutant in the same regiment. In December 1897 he was promoted to Poruchik (1LT). In 1897 Skoropadsky also married Aleksandra Petrovna Durnovo, a daughter of Pyotr Pavlovich Durnovo, the General Governor of Moscow (see Durnovo). Skoropadsky's first major assignment was a sotnia (company) commander in the 2nd Chita Cossack Regiment of the Trans-Baikal Cossack Host in Chita during the Russo-Japanese War. Later he became an adjutant to the commander of the Russian forces on the Far East General Nikolay Linevich. During the war Skoropadsky was awarded the George's Weapon and several orders. In December 1905 Tsar Nikolai II made him a Fliegel-Adjutant in a rank of Colonel. On September 4, 1910 Colonel Skoropadsky was commissioned as the commander of the 20th Finnish Dragoon Regiment still continuing to be a Fliegel-Adjutant of the H. I. M. Retinue. On April 15, 1911 he was reassigned to the Leib-Guard Cavalry Regiment. Leib-Guards were the elite Russian military forces assigned for a personal protection of the emperor. On December 6, 1912 Skoropadsky was promoted to the Major General of the H. I. M. Retinue.

At the start of World War I Skoropadsky was put in charge of the reorganized 1st Brigade of the 1st Cavalry Guard Division (General Nikolai Kaznakov) as part of the 1st Army commanded by General Paul von Rennenkampf. Skoropadsky already worked for von Rennenkampf during the Russo-Japanese War when the last was commanding Trans-Baikal Cossack Host. On August 6, 1914 his regiment distinguished itself in battles near Kraupishken as part of the Russian invasion of East Prussia. Later he was appointed as a commander of the United Cavalry Guard Division which distinguished near Kaushen. General Skoropadsky also commanded the 5th Cavalry Division. On April 2, 1916 he was promoted to Lieutenant General and was commissioned the 1st Cavalry Guard Division. From January 22 to July 2, 1917 he is in charge of the 34th Army Corps. In July 1917 the decommissioned 34th Army Corps was transformed into the 1st Ukrainian Corps. In October 1917 at the first Congress of the Free Cossacks he was awarded a title of the honorary Otaman. From October to November 1917 his 60,000-man Army Corps successfully defended the railway corridor stretching through Podolie to Polissya, Vapniarka – Zhmerynka – Koziatyn – Shepetivka and defended against the attacks from the Romanian front particularly the 2nd Guard Corps that was headed by Yevgenia Bosch. 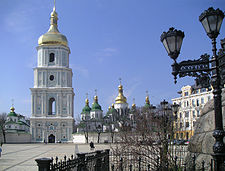 The coup d'état had been sanctioned by the Imperial German Army, which in the spring of 1918 had occupied Kiev and other parts of Ukraine. The Ukrainian Republic was intent upon repelling an invasion by the Bolshevik Red Army. In return, the Republican government pledged food stocks, which were to be expropriated from the peasants. The German General Staff was dissatisfied with the inefficiency and incompetence of the Republican government, which repeatedly failed to deliver the supplies on time.

Skoropadsky was accused by other Ukrainian nationalists of being a German collaborator supported by wealthy landowners. He was also considered too pro-Russian and dictatorial. Among other things, Skoropadsky formed a cabinet of mainly Russian speakers, Tsarists, and Slavophiles. Simultaneously, he committed Ukraine to federation with a restored Russian Empire.

Despite these criticisms, by contrast with the earlier socialist Rada, his government was given credit for having created an effective administrative organization, established diplomatic ties with many countries, concluded a peace treaty with Soviet Russia, and built many schools and universities, including the National Academy of Sciences of Ukraine.

In November 1918 Skoropadsky was removed from power in an uprising led by the social democrat Symon Petliura and the withdrawal of German forces from Kiev. The uprising nominally restored the Ukrainian People's Republic, but power was vested in a Directoria, a provisional government of five directors chaired by Volodymyr Vynnychenko. Skoropadsky abdicated on December 14, 1918 and fled to Berlin. 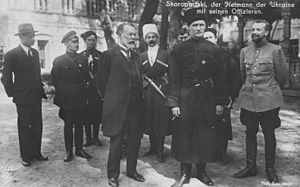 While living in Weimar Germany, Skoropadsky maintained close personal friendships with senior government and army officials originating as far back as his military-college days. In later years, however, he consistently refused offers to collaborate with the Nazis. During World War II, Skoropadsky fled before advancing Soviet forces along with the retreating German army. He died at Metten Abbey in Germany after being wounded by an Allied bombing near Regensburg, and was buried in Oberstdorf.

His movement continued into the early 1980s, influencing a Ukrainian monarchist program based on the Cossack State model. It ended gradually with the aging of eastern-Ukrainian émigré communities. Skoropadsky's daughter, Olena Skoropadska-Ott, resides in Switzerland, has visited Ukraine several times, and has been honored for her historical writings. 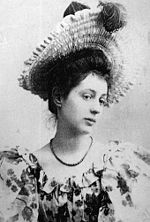 On January 11, 1898, Pavlo Skoropadsky was married to the Russian noblewoman Aleksandra Durnovo, a daughter of the Russian soldier and statesman Pyotr Durnovo (of a notable family of Russian statesmen and landowners) and Maria Vasiliyevna (of Ukrainian Cossack Kochubey noble family).

The couple had six children: