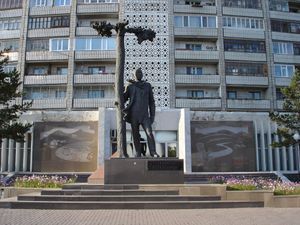 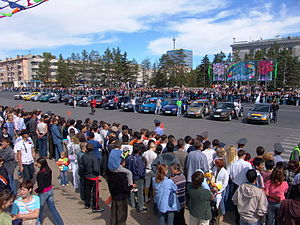 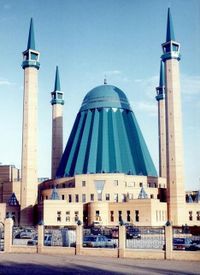 Lua error in Module:Coordinates at line 668: callParserFunction: function "#coordinates" was not found. Pavlodar (Kazakh and Russian: Павлодар, Pavlodar) is a city in northeastern Kazakhstan and the capital of Pavlodar Region. It is located 450 km northeast of the national capital Astana, and 405 km southeast of the Russian city of Omsk along the Irtysh River. As of 2010[update], the city has a population of 331,710.[2] The population of Pavlodar is composed predominantly of ethnic Russians and Kazakhs with significant Ukrainian, German and Tatar minorities. The city is served by Pavlodar Airport.

One of the oldest cities in northern Kazakhstan, Pavlodar was founded in 1720 as Koryakovsky, an Imperial Russian outpost. The settlement was created to establish control over the region's salt lakes, an important source of valuable salt. In 1861 the settlement was renamed Pavlodar and incorporated as a town. Pavlodar's significance was due in large measure to the substantial agricultural and salt-producing industries that had developed there despite the town's relatively small population. Pavlodar's population numbered only about 8,000 in 1897. The name Pavlodar signifies The Gift of Paul, and was chosen to commemorate the birth of the Grand Duke Paul Alexandrovich of Russia.[3]

After 1955, the Soviet Government's Virgin Lands Campaign provided the impetus for the rapid growth and development of modern Pavlodar. As part of the program, large numbers of young men and women from throughout the Soviet Union settled in the city, rapid industrial and commercial expansion followed. From the mid-1960s on, Pavlodar grew to become a major industrial centre of both the Kazakh SSR and of the Soviet Union; the largest local industries are the manufacture of farm machinery, aluminum, and industrial chemicals; an oil refinery was completed in 1978. Because of a major arms and armour manufacturing facility located in the city, Pavlodar was closed to foreigners until 1992.

An embankment on the Irtysh River

In 2012 Polish rolling stock manufacturer Pesa Bydgoszcz announced its intentions to build a tram assembly plant in Pavlodar, in conjunction with the city's plans to buy up to 100 new trams from the manufacturer to shore up its aging public transport infrastructure.[8]

FC Irtysh is a Kazakh football club based at the Tsentralny Stadium in Pavlodar. Another notable club formerly based in Pavlodar, FC Energetik, has since relocated to Ekibastuz.

Pavlodar has an 86 km streetcar (tram) network, which began service in 1965 with, as of 2012, 20 regular and 3 special routes. The network has a 60% share of the local public transport market. However its fleet of 115 trams are due to be replaced. In 2012 the city announced plans to purchase 100 new trams in conjunction with the construction of a new tram factory by Polish manufacturer PESA SA. In addition, Pavlodar has bus and minibus (marshrutka) service.[8][10]

Several universities are located in Pavlodar, among them: